Demetrius Andrade’s next fight is in Boston against a British fighter, so he decided to wear an American Revolutionary War uniform on Friday for the news conference to announce the fight for the Oct. 20 fight at the new Boston Garden against World Boxing Organization middleweight champion Billy Joe Saunders.

The 28-year-old Saunders (26-0, 12 KOs) is making the fifth defense of the WBO title he won from Andy Lee at the end of 2015. For his first professional fight in the U.S., he will face a former two-time junior middleweight champion from Providence, Rhode Island.

Both fighters competed in the welterweight division of the 2008 Olympics. Andrade (25-0, 16 KO) lost in the quarterfinals and Saunders was eliminated in the second round. 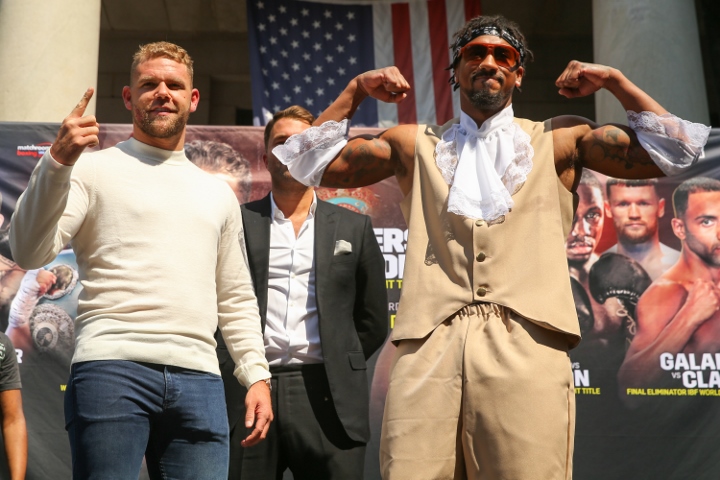 Andrade previously held the WBO and World Boxing Association titles at 154 pounds. He won the WBO title in 2013 against Vanes Martirosyan but the WBO later stripped him for inactivity. He captured the WBA title last year against Jack Culcay and gave up the title to move to up middleweight.

“This is such a big fight. The two main men at Middleweight at the moment is GGG and Canelo - and neither of them want to fight me or Demetrius. There's a lot of smoke and mist in the division right now, and when it clears up I will be the man standing there," Saunders said.

“All jokes and trash talk aside, this is going to be a really good fight. Does anyone want to fight Demetrius? No. Does anyone want to fight me? No. We have to fight each other to prove who the number one guy is. Technically, we are the best two in the division, and the winner is going to be number one. I'm World champion, I've been more active, I've boxed the better opposition - but I have to beat this man.

“There's too much at stake in this fight to even think about losing - and I will prove that I am number one. If I turn up at my 100 percent best, it's good enough to beat him. He's a great fighter and he's been avoided, our paths have crossed and we have to fight. The winner is number one.”

Canelo Alvarez, who held world titles at junior middleweight and middleweight, and Gennady Golovkin, who holds WBA, World Boxing Council and International Boxing Organization middleweight titles, are facing each other on Sept. 15 in Las Vegas.

After feeling like he was passed over for lucrative fights against the top fighters at 154 and 160 pounds, Andrade now has his first fight since October, a non-title win against Alentez Fox.

Saunders vs. Andrade is one of three world title fights on the card, which will be broadcast on the streaming service DAZN.

Why the urgency to be no1? Beat Ggg and you will be no1. Ggg s been the man longer and it has been a case of when.your ready for Ggg and that is now. So don't get ahead of yourself

[QUOTE=Usetoloveboxing;19049306]Yeah, hes not fought anyone of note at 160, but he destroyed J-Rock at 154. A guy I thought before the fight had a good chance of beating him. Dont get me wrong, I dont like Charlo as a man,…

[QUOTE=lefthooklead;19047187]How is the Saunder's winner up for no.4 with Charlo and Jacobs higher? Saunder's resume at 160 smashes both Jacobs and Charlo, plus he has a title. Charlo has done zero at 160.[/QUOTE] Saunders will give any of these guys…

[QUOTE=HighLightReal;19047090]What has Charlo accomplished to warrant a higher ranking than Saunders at [B][U]Middleweight[/U][/B]? Your post reads as though Charlo is the Don and everything at the weight centers around him. He beat 1 injured and aged former contender, that's it.[/QUOTE]…