Saunders Taking No Chances: Isufi Can Be Very Dangerous

BILLY JOE SAUNDERS insists he will not underestimate Shefat Isufi in his big super-middleweight test.

Saunders (27-0, 13 KOs) will be in action just 12 miles from his Hatfield home when he faces the German based Albanian at Stevenage FC’s Lamex Stadium on Saturday May 18, live on BT Sport.

The WBO ‘Interim’ title is currently on the line although promoter Frank Warren hopes the organisation’s vacant world title will be at stake as champion Gilberto Ramirez is believed to be considering relinquishing and boxing at light-heavyweight. 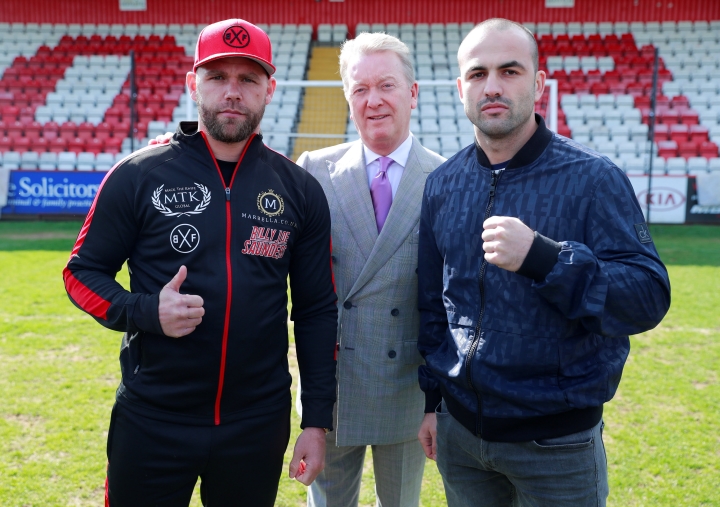 Isufi (27-3-2, 20 KOs) is ranked number one in the latest WBO rankings with Saunders right behind him in the second position.

Saunders, 29, said: “It is one of them where people don’t expect too much, but Isufi can be very dangerous.

“He has come from nothing and got his big chance. You don’t get ranked number one in the world for nothing, especially with who he is promotion wise.

“He has boxed his way into that position. I have to take him seriously and deal with him appropriately.”

Saunders has settled well with trainer Ben Davison after splitting with Dominic Ingle and there is no doubt that his words about taking Isufi seriously are true.

The former WBO champion has been living at a hotel on the outskirts of Manchester for seven weeks and training at Ricky Hatton’s gym.

“I am loving it at Hatton’s gym with Ben and I am just enjoying it again, added Saunders.

“I have to be happy at what I am doing and I will get the best out of myself. If It’s not like that it can become a slog.

“There is no secret that 2018 was a terrible year with terrible memories. Everything got to me a little bit.

“I just needed a complete change. It was the same when I was with Jimmy Tibbs. He was the best coach. I always use the term ‘coach’ and ‘trainer’ and he was the best purist coach I have been around.

“I just needed a change then because my head was going stale. Sometimes when your head goes stale you need that bit of change as a fighter and that is what I needed to get that spark.

“I have to stay ready. Because of my style - slick and fast, you don’t get to keep that forever so I want to show it while I’ve got it and beat whoever they put in front of me.”

I've had sinus problems since I was a kid. Chronic sinusitis. Wonder if drugs like Sudafed, Flonase, asthma drugs etc would cause a fighter to be banned/fined etc? Not saying a ban would be wrong, just curious as to the…

Saunders at his best beats GGG, Canelo & Jacobs. At 168 he beats anyone willing to face him don't @ me

[QUOTE=giacomino;19704648]Saunders gets a bum fight for an alphabet title. Shocked[/QUOTE] So did Andrade were you shocked then?

Saunders gets a bum fight for an alphabet title. Shocked