Saunders Suspended By British Boxing Board For Controversial Video

Billy Joe Saunders had his license suspended Monday by the British Boxing Board of Control in response to a social media video he posted online, which showed the WBO super middleweight champion giving tips about how to hit a woman.

Saunders said the video was a joke and apologized for it, but it is just the latest in several social media postings he has made in bad taste. In 2018, he was fined £100,000 by the BBBoC for bringing the sport into disrepute after a social media post in which he offered a woman crack cocaine in return for hitting a passer-by.

“The British Boxing Board of Control having considered comments made by Billy Joe Saunders on social media have suspended his boxer’s license pending a hearing under the Board’s misconduct regulation, at a time and venue to be confirmed as soon as possible,” a statement said. 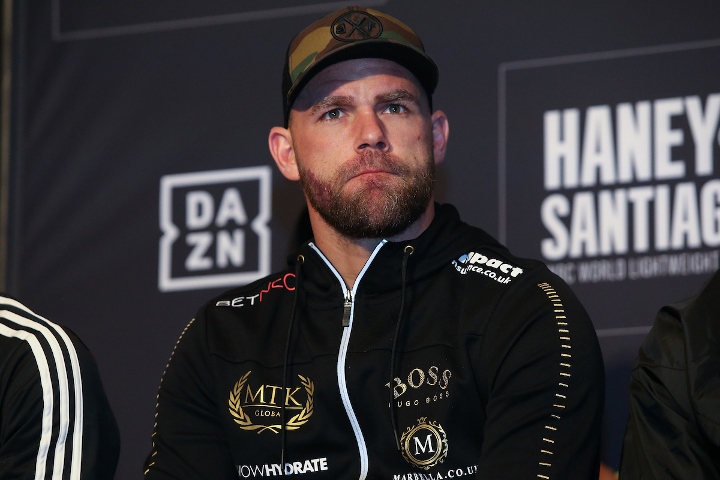 Claressa Shields, the three-weight women’s world champion, responded to Saunders’ video with a post of her own, giving tips to anyone attacked as Saunders suggested. She said they should duck and “hit them as hard as you can in the nuts.”

Saunders (29-0, 14 KOs) had been expected to box Mexican star Canelo Alvarez (53-1-2, 36 KOs) on May 2, but that fight was never formally announced. It is now on hold because of the coronavirus pandemic.

Should the BBBoC decide on a long-term suspension for Saunders, it could permanently derail that fight.

Saunders’ bad behavior in videos goes back much farther than 2018. In 2008, the former WBO middleweight champion was sent home early from the Beijing Olympics after a video emerged of him behaving in a "lewd and obscene manner" toward a woman at a French hotel where the Great Britain team was staying during a training camp.

#MeToo should hurry up & die !

[QUOTE=chicken-;20491608]Very idiotic to get upset over jokes too, but look at all you butthurts![/QUOTE] I can tell you are very upset by not coming up with anything better to say and resorting to repeat what i told your salty ass.…

[QUOTE=alexjust;20488415]As a champion he is expected to conduct himself in a certain way as opposed to trivializing violence against women through idiotic jokes. Got what he deserved as far as I'm concerned. Isn't it surprising that idiots tend to complain…

[QUOTE=Johnny_Roa;20488246]still very fckn idiotic to make videos like that. Bored much?[/QUOTE] Very idiotic to get upset over jokes too, but look at all you butthurts!

[QUOTE=NYG;20488286]Any man who says "wahhhhhh, but if it was a man, nobody would say anything, wahhhhhhhhhh!!" Is a ****ing punk like you, you ****ing wimp[/QUOTE] You sound like an uneducated garbage person. Thanks for the tip, Mr. White Knight.