Saunders: No One Could’ve Complained If Ryder Got Nod Over Callum Smith

Detractors criticized Callum Smith for his performance against John Ryder.

Billy Joe Saunders isn’t among that group of critics. The WBO super middleweight champion considers Ryder one of the toughest opponents he has faced, thus Saunders wasn’t surprised Ryder gave Smith such a tough time four months ago.

Saunders scored their 12-round fight for Ryder by “one or two” points, but Smith won a 12-round unanimous decision November 23 in Liverpool, England, Smith’s hometown. Smith defeated Ryder by bigger margins than the action suggested he deserved, but judges Francisco Rosa (116-112) and Jose Torres (116-112) scored eight rounds apiece for Smith, who won nine rounds on judge Terry O’Connor’s card (117-111).

“Look, I think a lot of people look at John Ryder and look at his record and go, ‘Oh yeah, you know, he’s not particularly good,’ ” Saunders told promoter Eddie Hearn as part of an Instagram Live video Monday. “But I’ve shared the ring with John Ryder. He’s probably given me one of me hardest nights I’ve had. And coming off when we was both unbeaten as well, we didn’t know what it was like to lose. So, I had to push that extra mile, more than anyone else. Or I’ve just got a bit more experience, you know?” 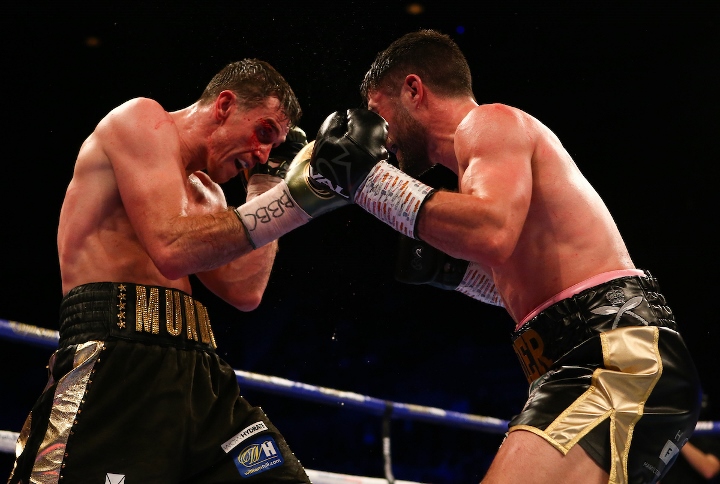 Saunders sparred with the 31-year-old Ryder in recent years as well.

“I believe that John Ryder’s a really good fighter and I believe he’ll give anybody in the division an absolute fight,” said Saunders, whose fight against Canelo Alvarez has been postponed indefinitely. “He always comes to fight. He’ll have a boxing match with you. I even sparred him for when I was boxing Willie Monroe. And when I fought him, I thought, ‘What a game c*nt he is.’ You know, because he came in every day, honestly, he came in every day, he was out of shape, he came in every day and give it his all, and I respect him for that.”

That’s why Saunders doesn’t think less of Smith (27-0, 19 KOs), the WBA super middleweight champion, for the difficulty he had on his way to defeating Ryder.

“I believe that it was a close, close fight,” Saunders said. “You know, if John Ryder would’ve got the nod, you couldn’t have really complained. I had him probably one or two [points] ahead. But Callum Smith’s also a great fighter, and I believe that if the Canelo fight didn’t happen for me or him, you know, it’s the only fight that really makes sense for the UK fans.”

Mexico’s Alvarez (53-1-2, 36 KOs) chose Saunders over Smith as his next opponent. Alvarez and Saunders were supposed to meet May 2 at T-Mobile Arena in Las Vegas, but their 12-round fight for Saunders’ WBO 168-pound championship has been pushed back to an unspecified later date due to the coronavirus pandemic.

Gorilla got robbed of a career defining moment !

[QUOTE=theface07;20483078]Callum DID complain even when we got the decision. He was upset that the bulk of observers, ringside and otherwise, thought he lost. Him and Joe Gallagher were crying their eyes out in the post fight press conference trying to…

[QUOTE=theface07;20483068]Why? You hate him so much wouldn't you like to see gingerbread teach him a lesson or are you afraid the dirty gypsy beats the dirty mexican?[/QUOTE] Cause he’s a fughin azzhole Don’t deserve making easy money boxing Maybe he…

[QUOTE=theface07;20483078]Callum DID complain even when we got the decision. He was upset that the bulk of observers, ringside and otherwise, thought he lost. Him and Joe Gallagher were crying their eyes out in the post fight press conference trying to…

No One Could've Complained If Artur Akavov Got Nod Over Saunders