Saunders: I'm Very Confident I Would Stop Andrade Because Of His Style

Even Tony Bellew raised his eyebrows.

Billy Joe Saunders has won only one of his six world title bouts by knockout and doesn’t typically predict that he’ll win fights that way. That’s why Bellew, Saunders’ close friend, took notice toward the end of an Internet interview when England’s Saunders suggested he would stop Demetrius Andrade if they finally fight.

Eddie Hearn, Bellew’s co-host, asked Saunders about the possibility of squaring off against Andrade if the skillful southpaw’s lucrative showdown with Canelo Alvarez can’t be rescheduled after the COVID-19 pandemic.

“Do you know what with Andrade?,” Saunders said during the newest episode of “Talk The Talk” on Matchroom Boxing’s YouTube channel. “It’s one of them that he’s got a very, very big mouth. But I know that – listen, you never hear me say this – but I would be very confident of stopping Andrade because of his style.” 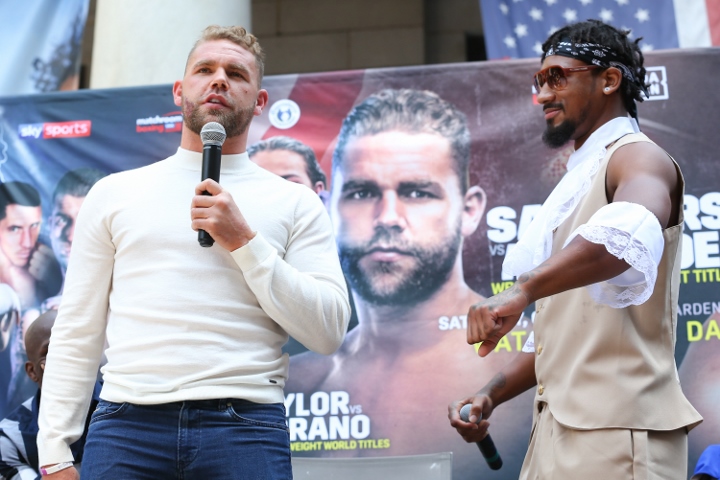 Saunders didn’t elaborate about the flaws in Andrade’s style that lead him to believe he would win their bout by knockout.

What’s clear is that the rivalry between Saunders (29-0, 14 KOs) and Andrade (29-0, 18 KOs) has intensified since Saunders tested positive for a banned substance before he was supposed to make a mandatory defense of the WBO middleweight title against Andrade in October 2018 at TD Garden in Boston. The Massachusetts State Athletic Commission consequently denied Saunders’ request for a boxing license and the WBO stripped Saunders of that championship.

The 30-year-old Saunders since has won the WBO 168-pound title. Andrade repeatedly has stated that he would move up eight pounds for the opportunity to reschedule the Saunders fight.

“I would bust Billy Joe Saunders up at 160 or 168,” Andrade said during a recent episode of Matchroom Boxing’s podcast. “That’s not a problem.”

It is more likely, though, that Andrade will make a mandatory title defense against another Brit, Liam Williams (22-2-1, 17 KOs), in his first fight following the coronavirus crisis. In his most recent appearance, Andrade stopped overmatched Irishman Luke Keeler (17-3-1, 5 KOs) in the ninth round January 30 in Miami.

[QUOTE=Get em up;20582840]I think BJS and Andrade fight would look alot like 2 alley cats walking in circles with their backs arched and probably would be about as entertaining. That. Being said let's make it happen cause I would love…

Bjs vs Andrade isn't going to happen because Liam Williams is gonna k.o. Andrade, remember that.

Wait this the same saunders who juiced up and ruined the first fight they were about to have? Same saunders who avoided fixing his issues to make the fight come to fruition?

Except your b.itch ass used some nasal spray on purpose to get out of the fight and protect your 0 to sell it to canelo... bi.tch