WBO super middleweight champion Billy Joe Saunders is more than willing to get in the ring with Demetrius Andrade, who holds the WBO's world title at middleweight.

They were scheduled of face each other back in October of 2018, with the fight falling out due to Saunders testing positive for a banned substance.

Both Saunders and Andrade are possible opponents to face Canelo during Cinco De Mayo weekend in the month of May.

Canelo, who holds the WBC, WBA super middleweight titles, will potentially return to the ring on February 27th in a mandatory defense against Avni Yildirim. 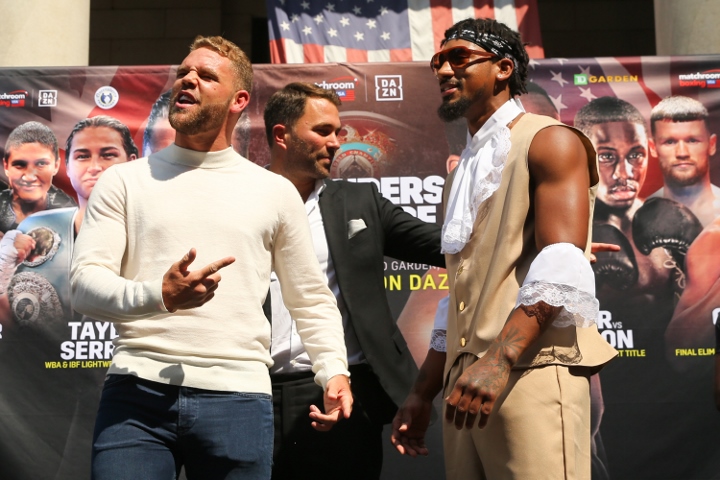 Saunders views the clash with Andrade as a possible box-off - where the winner gets a crack at Canelo in May.

The British boxer is very confident that he would put Andrade to sleep if they ever meet in the ring.

"Me and him have swapped messages on social media. I would love to give him a hiding. Eddie Hearn, let's make the fight. Let's get it on, rock and roll. Vacate the WBO 160 title, move up, tell the WBO you're moving up, and we can get it on.

"I can make 160, but why would I want to go back down to 160 when all the big money fights are at 168, and all the big talents have come up to 168? I don't want to be sitting around. Let Canelo do his thing. If he's fighting in February, I would love to fight him in May, but if he thinks I'm going to be sitting around until May twiddling my thumbs, he's got another thing coming.

"I'm not going to be doing that. I'm back in the gym, I'm in shape, let's get it on. Let's stop beating around the bush and waiting around. I'm going to get sick and tired of waiting around for one of these big fights. I'm getting to the stage that if a big fight doesn't get made, 'Thank you very much, see you later.' I'm in it for the big fights to see how good I am. Andrade, if he moves up to 168, he jumps in front of everyone. The winner of us gets Canelo. It's a brilliant plan, isn't it? It works for DAZN. The winner of us fights Canelo."

Here's the thing Sid it seems like u like the smell AND the taste of Saunters bizalls under ur nose and in your mouth. Just because the other drug test organizations do not count amphetamines is totally irrelevant in this…

[QUOTE=Zodogg;21010139]Ok so VADA bans amphetamines. So if amphetamines aren't Performance Enhancing Drugs Why would they be banned. Saunders may have been out of competition but VADA, who oversees ped use, felt that whatever however whenever he used violates THEIR RELES…

[QUOTE=Sid-Knee;21009190]Your logic is off then because Saunders wasn't on PEDS, it was amphetamines outside of competition. everyone allows it other than VADA. Go and do your research and don't let your ignorance get in the way of the truth.[/QUOTE] Ok…

[QUOTE=Zodogg;21004537]What was racist about the post? He was talking about a ped user fighting the guy he was supposed to fight when he got caught by the pedbusters....I have a problem understanding your logic.....[/QUOTE] Your logic is off then because…