Saunders: I Might Go To 175, Become Second To Beat Canelo!

This past Saturday night, Canelo moved up by two weight divisions to challenge Sergey Kovalev for the WBO light heavyweight title. Canelo scored an eleventh round knockout to walk away with the title at the MGM Grand in Las Vegas.

Saunders has been chasing a fight with Canelo since the two boxers were both middleweight champions. 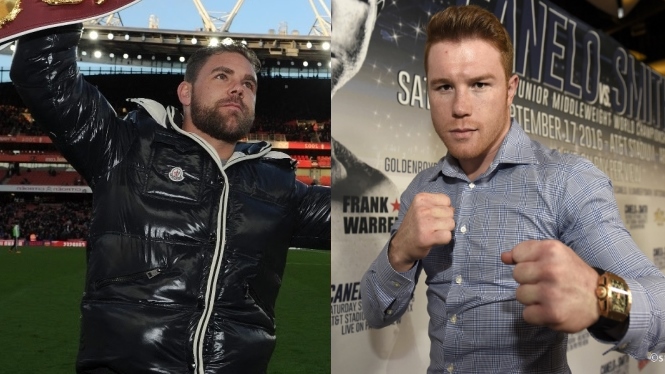 Saunders is prepared to exploit a championship rule under the World Boxing Organization - where a champion moving up in weight is automatically made the mandatory challenger to the title.

There is only one problem with that, Gilberto Ramirez already made that move by leaving behind his WBO title at 168 to make the jump to 175. Ramirez is already the mandatory challenger to the WBO crown.

But Canelo also holds the WBA "regular" title at 168 - and many expect him to move back down.

"I want Canelo, they keep saying he's the best. Floyd Mayweather is the only man to beat him, I know I can be the second man to beat him," Saunders exclusively told Sky Sports.

"It'd be a very tough challenge but there is something inside of me that I've known since day one when I turned pro. I knew our paths would cross and I'm 100% sure that I'd beat him.

"I might move up to 175lbs and then I become mandatory to him. He either fights me or vacates. Give me a fair playing field and I know I have the beating of him. I do have the lock to undo 'Canelo'. I'm feeling the best I have, I'm ready to rock and roll, I want these big fights."

Saunders will return to the ring on Saturday night to make a voluntary defense against Marcelo Corceres on the KSI-Logan Paul undercard at Staples Center in Los Angeles, California.

[QUOTE=Chuckguy;20178623]Canelo won’t take the fight for the same reason GGG didn’t take it. Billy hoe makes them look bad and it’s awkward for them[/QUOTE] we in dis thang mayne!