Under normal circumstances, he’d give Smith a legitimate shot to upset Canelo Alvarez in their 168-pound title fight. Saunders just doesn’t think Smith will have had enough time to properly prepare for such a difficult fight by the time they enter the ring December 19 at Alamodome in San Antonio.

Saunders discussed the Alvarez-Smith bout during a virtual conference call Monday to promote his own 12-round, 168-pound title fight Friday night against Martin Murray.

“When they’re giving someone four to five weeks’ notice,” Saunders said, “I believe that’s not enough time to prepare mentally in your own head to beat someone like him, because of the fact of the judges, promotions. Everything’s gonna be set up to suit him. I mean, what they’ll probably do, they’ll probably get Callum Smith out there and for the duration he’s out there he’ll probably be doing stuff like this, just talking, rattling on to the media and talking more than rather training and focusing on a game plan to win.

“But Joe Gallagher’s a very experienced trainer, so hopefully Callum’s been under the impression of the news for a long time that he’s been fighting Canelo. Maybe we see an upset, but at the minute, I don’t see no one beating him without a proper training [camp] and [full] mindset.” 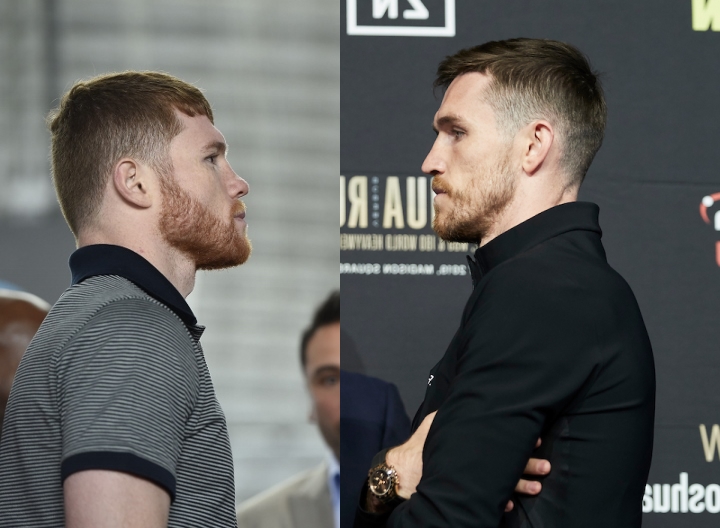 Saunders (29-0, 14 KOs) was afforded a comparable amount of time to train to meet Murray (39-5-1, 17 KOs) on Friday night at Wembley Arena in London (DAZN; 2 p.m. EST). The difference, of course, is that the unbeaten WBO super middleweight champion clearly will encounter a less dangerous opponent than Alvarez.

“I think Callum’s got the tools in his box to win,” Saunders said, “but you know, you have to have the right preparation time and put the man hours in, and go over and repeat that and repeat that for maybe two months, three months, hell, to beat him, what strategy you’re gonna go in there with. And I just think that it’s all been crash, bang, wallop! Give me my cash and, you know, let’s get it on. But listen, I hope I’m wrong and I hope he gets the job done, fellow Brit.”

The 31-year-old Saunders would like to fight the Alvarez-Smith winner in his first appearance of 2021. Saunders was supposed to defend his title versus Alvarez on May 2 in Las Vegas, but their fight was canceled due to the COVID-19 pandemic.

“Obviously, I would love the winner of that fight,” Saunders said. “If Smith wins it, I’m sure there’s a rematch clause in there. But, you know, to win that fight you’ve gotta be incredibly in good shape, good mind, good health. You know, you’ve gotta go in there with a proper camp, and I just don’t think four, five weeks is enough training camp for that sort of fight.”

[QUOTE=Sid-Knee;20946078]You defended the coward Wilder in every situation and thought he was worth more so should get 50/50. I'm not confusing you or any other clown on here when i point out some things that they don't want to face…

[QUOTE=STREET CLEANER;20940274]You maybe be confusing me or making a fool out of yourself. I always had said that skills pays the bills and AJ would beat Wilder. But Wilder's right hand is legit and it will always be an issue.…

[QUOTE=Sctrojan;20940591]For the sake of an entertaining fight let's hope so. Anyone got insight to his physical condition around the time the announcement of the fight was made?[/QUOTE] I don't have any special insight but I hear that he's been training,…

[QUOTE=whollisboxing;20940574]Exactly. Smith has been on a short list of potential Canelo opponents for months so it's not like getting the fight is a complete surprise. They were in negotiations before so surely Smith isn't just now getting off his couch…

[QUOTE=MidWestBrawler;20927091]5 weeks is enough time to game plan If he entered camp out of shape then he's not very professional[/QUOTE] Exactly. Smith has been on a short list of potential Canelo opponents for months so it's not like getting the…