Billy Joe Saunders would welcome the payday that would come with challenging Canelo Alvarez if Alvarez can beat Gennady Golovkin in their rematch next month.

Saunders has long wanted the chance to beat Golovkin himself, yet doesn’t deny the enticing economics of a fight against Alvarez. 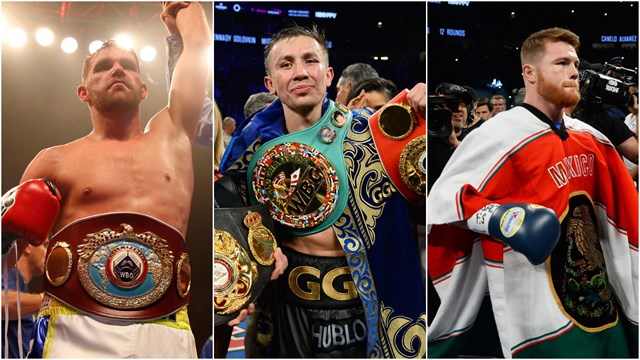 The outspoken Saunders is rooting against Alvarez because he doesn’t feel the Mexican superstar should be rewarded with their lucrative rematch after failing two performance-enhancing drug tests in February for clenbuterol.

“Well, I reckon Canelo shouldn’t even deserve a rematch for the drug scandal,” Saunders told BoxingScene.com over the weekend in Belfast, Northern Ireland. “Listen, he’s got it. But I wanna see Golovkin come through. Hopefully, Golovkin knocks him out or beats him on points.”

England’s Saunders (26-0, 12 KOs) agreed to battle Kazakhstan’s Golovkin (38-0-1, 34 KOs) in a fight that would’ve taken place this Saturday night at The Forum in Inglewood, California, if Golovkin and Alvarez hadn’t come to terms on a financial split for their rematch. Those plans were scrapped two months ago once Oscar De La Hoya, Alvarez’s promoter, agreed to a 55-45 split that favors Alvarez (49-1-2, 34 KOs) in his second fight against Golovkin.

The 28-year-old Alvarez’s six-month suspension, the Nevada State Athletic Commission’s punishment for his two failed PED tests, ended after Friday because it was retroactive to the date of his first failed test (February 17). Alvarez was supposed to box Golovkin again May 5 at T-Mobile Arena, but that fight was canceled because the NSAC suspended Alvarez on April 18.

Alvarez and Golovkin battled to a controversial 12-round draw 11 months ago at T-Mobile Arena.

[QUOTE=j.razor;19038007]Incorrect. Money gives the challenger a shot at the money. Nelo is money lil g is the challenger & Nelo [B]didn't have to[/B] give lil g more than he did let's make THAT clear.[/QUOTE] yeah you may have a good…

[QUOTE=j.razor;19038007]Incorrect. Money gives the challenger a shot at the money. Nelo is money lil g is the challenger & Nelo [B]didn't have to[/B] give lil g more than he did let's make THAT clear.[/QUOTE] How is GGG the challenger when…

[QUOTE=kidbazooka;19037967]Wow what a shocker a euro fighter backs another euro fighter. Who gives a fuuck what this nobody thinks.[/QUOTE] Aren't you the guy who called Lomachenko a bum and said he was going to get schooled by Linares? Who gives…

[QUOTE=j.razor;19038494]Oscar messed up cuz he could of called lil g's bluff cuz at the other end was Jermall Charlo which lil g & his team do NOT want. B-bu-but he didn't earn a shot. #Twinkies[/QUOTE] Switching topics from who bent…

[QUOTE=Robi13;19038347]Nothing he said is a fact. If so, prove it. That's right you cant cuz you're an idiot just like him. Retards[/QUOTE] I don't have to prove anything because you are delusional. Fact