I met Saul Mamby in 1983. I'd just begun researching The Black Lights - my initial foray into boxing writing - and wanted to talk to some fighters. So I went to Ringside Gym, one of three gyms near Times Square in New York. Mamby had just finished working out. I asked if we could talk. He said "sure." I asked my first question. And Saoul answered, "Wait a minute. This is a serious interview. Let me shower and then we'll talk."

We talked for two hours that afternoon. He was the first fighter I ever interviewed as a boxing writer.

Mamby was born in the Bronx in 1947. He graduated from Bronx Vocational High School in 1965 and began boxing that year as an amateur. He turned pro in 1969 after a stint in Vietnam.

Had he seen combat?

"Yeah, enough. And boxing is easier."

During the early years of his ring career, Mamby worked at a variety of jobs. As a stock clerk, washing windows on skyscrapers. "I drove a gypsy cab for a while," he told me. "But it got too dangerous so I quit." 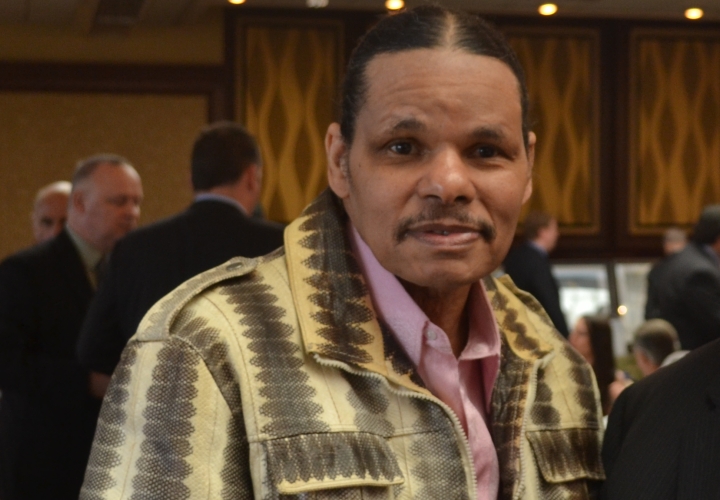 He was a master of ring generalship and pacing. Not a big puncher. But he hit opponents with a lot of punches and, as the rounds went by, the damage added up. The most impressive thing about him as a fighter was his defense. He had an intuitive sense of when punches were coming and the ability to make opponents miss by a fraction of an inch. On the day we talked, in hundreds of rounds of boxing, no one - not even Roberto Duran ­ had knocked him off his feet.

But Mamby's career languished until he met Don King.

Talking about King, Saoul said, "We met and he asked me to sign a promotional contract, which I did, and a managerial contract with his son Carl, which I refused. So now I had a promoter but no fights. All I got was a walk­out fight against Norman Goins. And I was a fighter who'd gone the distance with Antonio Cervantes and Roberto Duran. Finally in 1979, I signed with Carl King as my manager. I'd never met him in my life. And right away after I signed with Carl King, I was offered Marion Thomas in New York and Tom Tarantino in Atlantic City - both easy fights. One month after the Tarantino fight, I was in Seoul, Korea, fighting Sang-Hyun Kim for the [WBC 140-pound] world title."

Mamby beat Kim on a fourteenth-round knockout and successfully defended his title five times (including a knockout victory over Esteban de Jesus). On June 26, 1982, he lost by split decision to Leroy Haley. Then Haley was defeated by Bruce Curry who relinquished the crown to Billy Costello.

As my research on The Black Lights progressed, I decided to view the sport and business of boxing through the prism of Costello, his manager (Mike Jones), and trainer (Victor Valle). In a twist of fate, the book's climactic fight, contested fourteen months after I visited Ringside Gym, was Billy's November 3, 1984, title defense against Mamby.

"I never went through this before," Saoul told me when I visited him in his hotel room that night. "I've never been hurt like this in the ring."

Time passed. I finished writing The Black Lights. After it was published, I sent a copy to Mamby as a courtesy. It seemed unlikely that he'd enjoy reading about his getting beaten up, but it seemed like the right thing to do.

Several days later, my telephone rang. It was Saoul.

"I just finished reading your book," he told me. "It's the best book I've ever read."

That moved me. A lot.

In the years that followed, Saoul and I were in touch from time to time. He fought a lot of tough opponents as his career wound down (champions like Buddy McGirt, Maurice Blocker, Javier Castillejo, and Jorge Vaca) and lost to most of them. He was always willing to go in tough. Overall, he fought thirteen men who held world titles at one time or another and was stopped only once (at age 46, by Derrell Coley).

Then, on March 8, 2008, Saoul did something bizarre. At age 60, he returned to the ring as an active fighter and lost a ten-round decision to a club fighter named Anthony Osbourne. By most reckonings, that made him the oldest combatant ever in a professional bout.

After the fight, I had lunch with Saoul and asked him why he'd taken the fight.

"It was good for me," he said. "I enjoyed it. I didn't get hurt or beat down. It's just that my tools weren't sharp. Putting guys in body bags in Vietnam, knowing that all their dreams had died with them; I vowed that, if I got out of there alive, I was going to do what I wanted to do with my life. Boxing makes me feel happy and complete, so I’m boxing. I risked my life in Vietnam and I can do what I want with it now."

Saoul Mamby fought some of the best fighters in the world when he was young. And there was a time when he was one of the best. Ring 8 announced this week that he died recently. A nice man who was important to me is gone.

Thomas Hauser's email address is thomashauserwriter@gmail.com. His most recent book – A Dangerous Journey: Another Year Inside Boxing – was published by the University of Arkansas Press. In 2004, the Boxing Writers Association of America honored him with the Nat Fleischer Award for career excellence in boxing journalism. On June 14, 2020, Hauser will be inducted into the International Boxing Hall of Fame.

Nice article. We always joke about guys like Ortiz being old, but Saoul Mamby actually fought when he was 60! He lost but he still laced them up and had a go. RIP Warrior!

Good read. Mamby seems to have had a great philosophy on life. For him to say that boxing was easy compared to his time in Vietnam says a lot.

I liked Mamby a lot. He was a dude who would fight anybody at a moment's notice. He shared the ring with a lot of greats and I didn't even know he fought at 60. That's incredible. R.I.P. champ. You…

A real man from an era of real men. These people are not being replaced when they pass away. [IMG]https://media.giphy.com/media/x70p0tqMsvqMM/giphy.gif[/IMG]