The reigning two-time featherweight titlist successfully turned away the challenge of a determined Rafael Rivera atop Saturday night’s Fox-televised tripleheader, which averaged 1.376 million viewers according to Nielsen Media Research.

The telecast—which aired live from Microsoft Theatre in Los Angeles, Calif.—peaked at 1.75 million viewers during the 10:00pm-10:15pm ET timeslot. The main event itself drew an average of 1.671 million viewers from 9:45pm ET through the show’s conclusion.

Another 151,000 viewers tuned in on Fox Deportes, bringing the show’s overall average to 1.53 million viewers across all Fox and Fox Sports platforms. 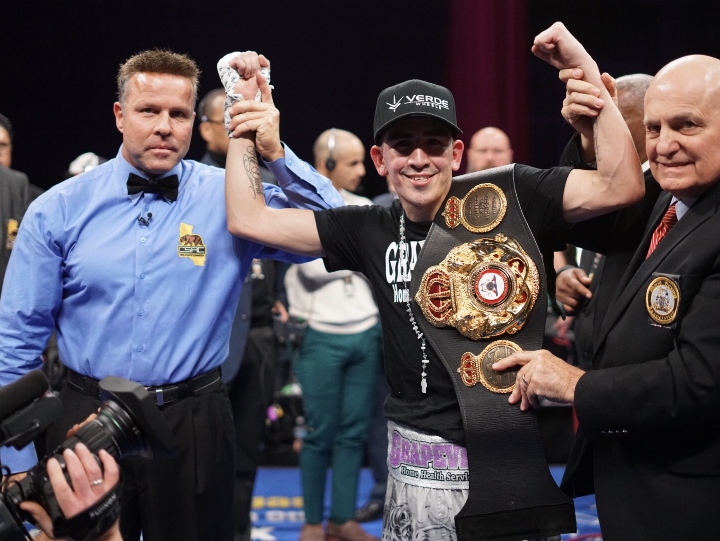 Santa Cruz (36-1-1, 19KOs) registered the third successful defense of his second tour as a featherweight titlist. It marked the second Fox-televised appearance for the 30-year old Mexican boxer, who also topped an Oct. ’17 edition of PBC on Fox.

That show also featured the three-division titlist in a “tune-up” defense, scoring an 8th round knockout of Chris Avalos atop a tripleheader which averaged 1.483 million viewers. That show—which came back when PBC still held a time-buy agreement with Fox Sports platforms—also included Abner Mares in a supporting bout, with the card designed to further drum up interest for their eventual rematch last June on Showtime.

Saturday’s offering didn’t carry quite the same backdrop of future plans for the defending titlist, who was roundly criticized for occupying a primetime headliner for a showcase fight with Rivera—a late replacement for an injured Miguel Flores, a matchup which was equally met with lukewarm reception during the pre-fight buildup.

The hope is for Santa Cruz to move towards a unification clash with Gary Russell Jr., a fellow featherweight titleholder under the PBC umbrella. To his credit, Santa Cruz did call him out along with unbeaten titlist Josh Warrington and former rival Carl Frampton, against whom he split a pair of fights between July ’16 and January ’17.

In the evening’s chief support, Omar Figueroa traded with John Molina Jr. over 10 rounds, with the unbeaten former lightweight titlist claiming a 10-round unanimous decision. Scores were wider than expected and all in favor Figueroa, who made headlines in the worst way when the weight limit was changed from 140 to 146 pounds shortly before the weigh-in.

Specific ratings for the supporting bouts were not immediately available.

Given the matchup at the top of the bill and an undercard lacking major drawing power, it was expected for Saturday’s broadcast to produce a sharp decline from preceding shows. The rebranding of the PBC on Fox series debuted last December, with Jermall and Jermell Charlo appearing in separate title fights.

That broadcast attracted a peak audience of 2,421,000 during the main event, which Jermall Charlo won by unanimous decision over late replacement Matt Korobov at Barclays Center. An average of 1,971,000 viewers watched that entire three-bout broadcast.

The January 26 edition of PBC on Fox remains the highest rated of the series to date, an event which was topped by the return of unbeaten welterweight titlist Keith Thurman following a near-two year hiatus.

Thurman’s hard-fought 12-round win over Josesito Lopez topped a live tripleheader which averaged 2.17 million viewers, peaking at 2.765 million viewers during the latter stages of the main event, which on its own drew a healthy average of 2.48 million viewers.

If there’s a win to be had for Santa Cruz’s latest headliner (aside from the actual in-ring victory), the show was up 21% from a PBC on Fox telecast airing in this very time slot one year ago. That card was topped by Devon Alexander and Victor Ortiz fighting to a disputed 12-round draw, with the show drawing an averaged 1.136 million viewers.

The network has already begun promoting its next primetime event, when Shawn Porter defends his welterweight title versus mandatory challenger Yordenis Ugas. Their March 9 headliner will air live on Fox from Dignity Health Sports Park in Carson, Calif., with a Sunday edition of PBC Face To Face: Shawn Porter-Yordenis Ugas averaging 610,000 viewers.

[QUOTE=MEXfistology;19528404]There's only so much Floyd and tank can do, we all know Mexicans and British fans are the best , stronger fans in the world, ..ex Andre ward was the best p4p fighter at some point and he couldn't even…

1.37M viewers is definitely not good ratings. Prime Time network you should be avg over 2M viewers. According to Fat Boy Dan not only did it finish dead last for ANY programing on ANY of the Networks on Saturday night…

Solid #'s for an ok card...I think Porter and Ugas will do even better numbers. Got some good fights on the horizon

[QUOTE=CocoonOfHorror;19528478]These are NOT good numbers for Fox flagship, which is in nearly 120 million US homes. They could do better ratings showing a rerun of Cops or the Simpsons. For context, this card averaged about as many viewers as "Pioneer…

[QUOTE=TJ highway;19529120]Injury is part of boxing. These things happen from time to time. Gervonta Davis was crying fowl when Abner Mares backed out of the fight because of a detached retina. That's a potential career ending injury. By the time…