His brother, Antonio, has been doing the bulk of the physical training with him. Their father, Jose, has been overseeing the operation.

It has been business as usual for the Santa Cruz clan as they prepare for the biggest fight of Leo’s life, a Showtime Pay-Per-View showdown with unbeaten knockout artist Gervonta Davis on October 31 at Alamodome in San Antonio.

Three months ago, though, doctors braced Leo, Antonio and the rest of their close-knit family for the likelihood that Jose wouldn’t survive his debilitating battle with COVID-19. Jose Santa Cruz, who had already beaten cancer, was hospitalized for more than a month in June and July as the virus ravaged him.

“We thought we were gonna lose him,” Leo Santa Cruz told BoxingScene.com. “When he was in the hospital, his lungs were failing, his heart stopped. He caught [COVID-19] two times, so he kind of died in bed, but they brought him back. They told us that if he died one more time, they needed to know what we wanted to do. They said that they didn’t think he would make it through the night. So, we talked to my mom and they said that if they brought him back to life, he would basically be dead, but the machines would keep him alive. But my mom said we don’t want him living like that. We don’t want him to be suffering, so that if something [else] happened to him we would just have to let him go.”

Leo Santa Cruz and his family fully expected the worst whenever a doctor or nurse called during those dark days to give them updates on Jose’s critical condition. 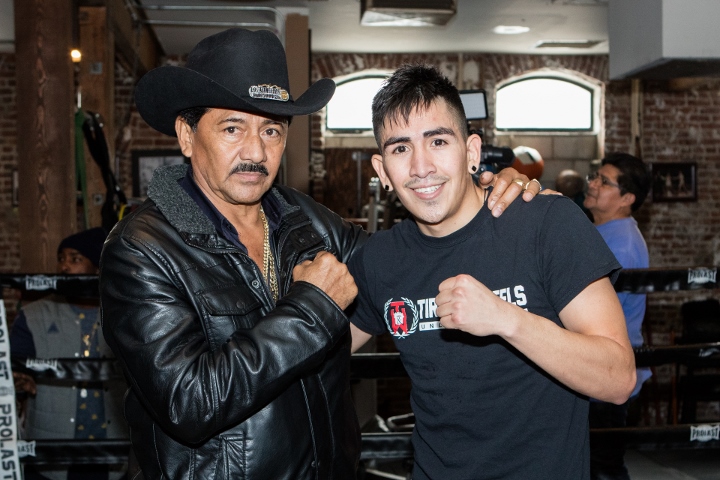 It wasn’t the first time this deeply religious family felt divine intervention kept their resilient, prideful patriarch with them.

Jose was confined to a wheelchair while Leo trained for his first fight against Carl Frampton, who became the only opponent to defeat Santa Cruz when he won their initial 12-round encounter by majority decision in July 2016 at Barclays Center in Brooklyn. Santa Cruz regained the WBA “super” featherweight title from Frampton in their immediate rematch, another 12-rounder that he won by majority decision in January 2017 at MGM Grand Garden Arena in Las Vegas.

By the time Santa Cruz began training for his rematch against Abner Mares late in the spring of the following year, Jose’s cancer was in complete remission. Other than aches and pains, Jose remained relatively healthy until he contracted COVID-19.

Three months removed from another brush with death, he spends every day at a boxing gym in La Puente, California, helping Antonio prepare Leo for his 12-round, 130-pound title fight versus Davis.

“My dad, right now, is doing great, thank God,” Leo Santa Cruz said. “The pain has been controlled a little bit. He has some days where he has pain, but it’s normal. But he’s been in camp with me and everything. He did have some problems before the fight got made, before we came up with the date for the fight. He was doing really, really bad. But God made a miracle. He made it through the whole COVID thing. He almost passed away. The doctors said there was no hope for him, but like I said, thankfully God made a miracle and he’s gonna be there for this fight.”

Antonio Santa Cruz contracted COVID-19 as well, but his case wasn’t as severe. He self-quarantined for about a week and then tested negative for coronavirus.

Leo Santa Cruz repeatedly tested negative for COVID-19, though a doctor informed him that he probably had the virus at some point.

Once Antonio, Luna and Jose recovered, Leo Santa Cruz began concentrating on preparing for his huge fight with Davis.

Having his father in camp and in his corner on fight night has always been comforting for Santa Cruz. The four-division champion from Rosemead, California, has totally trusted his father’s strategic instincts throughout his amateur and pro careers.

“I have my dad, my brother and my whole team training with me,” Leo Santa Cruz said. “Everything’s coming out great.”

Jose’s presence will be particularly important throughout the remainder of his camp and on the night of October 31. In Davis, his son will encounter a dangerous puncher who has knocked out all but one of his pro opponents (23-0, 22 KOs).

Baltimore’s Davis has stopped 14 straight opponents inside the distance and is a 4-1 favorite over the durable Santa Cruz (37-1-1, 19 KOs). Significant factions of fans and media have dismissed Santa Cruz’s chances of pulling off an upset.

Those cynics have motivated Santa Cruz, but the humble Mexican-American has kept such skepticism in perspective in light of what has happened to his father.

“I’m really grateful,” Leo Santa Cruz said. “Every day I thank God for keeping him here with us. I’m blessed because I know everything he’s been going through is very hard. To have had all these things happen to him, he could’ve been gone a long time ago. But he’s strong. He’s a warrior. And I just think God is on our side. My dad is here for a reason. I’m just very happy he’s here with us.”

Damn the man is already dealing with Cancer and now Covid? :nonono: Anyway nothing but respect and best wishes to Mr. Jose Santa Cruz and the Santa Cruz family, Mr. Santa Cruz is clearly a strong man and a fighter…

Another reason to root for that dude LSC. Where is [MENTION=20476]santa[/MENTION]. ? :headbang:

Man talk about strong willed I'm glad to see he recovered and is in better health now not to mention when he should be taking easy he is straight back into training his son.. for sure the man has spirit…

Damn. Dude is resilient af. Now you know where Leo’s zombie like tank and will comes from. This man hasn’t been healthy in a minute and he’s still around. Good for them. Wish him and Leo’s fam the best

AS far as the fight goes in the ring I pick Davis ..... but Davis can loose the fight outside the ring very easily. Then in the ring his living as a prospect with a Champion attitude is over. So…