Sanchez Wants 3rd Canelo Fight in May, GGG To Rest Until Then

LAS VEGAS – If Abel Sanchez could schedule Gennady Golovkin’s immediate future, he would want Golovkin’s next fight to come against Canelo Alvarez in May.

A third bout between those middleweight rivals obviously is warranted after their extremely competitive rematch Saturday night at T-Mobile Arena. Whether that happens, of course, will be up to Alvarez and his handlers at Golden Boy Promotions now that he has beaten Golovkin by majority decision.

Alvarez instead could fight Montreal’s David Lemieux (40-4, 34 KOs), who knocked out Ireland’s Gary “Spike” O’Sullivan (28-3, 20 KOs) in the first round on the undercard Saturday night to become the mandatory challenger for Alvarez’s WBA middleweight title. That would leave Golovkin (38-1-1, 34 KOs) to find another opponent before attempting to secure a third fight against Alvarez (50-1-2, 34 KOs) later in 2019. 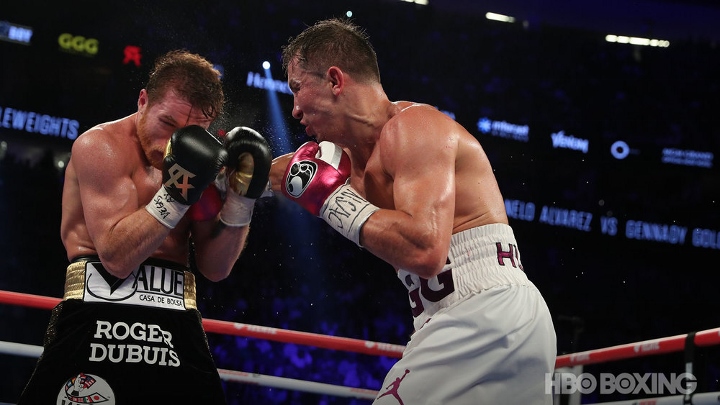 “I think that in this business, in this boxing business, they have to look at all the possibilities for the future not only for Canelo, but also for Golovkin,” Sanchez told BoxingScene.com following a press conference Saturday night. “I think that, as a pair, they stand to do better than any fight that either one could ever have [against another opponent]. Eric Gomez, after the decision was announced, came over to me and says, ‘Man, we’ve gotta do a third one. We’ve gotta do a third one.’ I said, ‘Yeah, man, talk to Tom.’ I think next May 5th would be a perfect date. I think it’s a strong possibility that if there’s another fight between them that it’s gonna happen May the 5th.”

A third Alvarez-Golovkin battle would be the most profitable fight for both boxers. Golovkin and his promoter, Tom Loeffler, have talked about Golovkin returning to the ring in December, but Sanchez would prefer that the 36-year-old Golovkin takes a long break after a grueling rematch versus Alvarez.

“No, I wouldn’t want him to,” Sanchez said regarding Golovkin fighting in December or early in 2019. “I would want him to rest now. He’s had some good fights. He rests now and comes back to the gym at the beginning of the year, and they fight in May.”

Naturally, Kazakhstan’s Golovkin wants nothing more than another shot at Alvarez, who hasn’t decided whether he’ll box again before May 4.

The risk is high : 1- age factor the main risk 2- since it IMPOSSIBLE to win a decision there are two thing: a. Prepare to risk going to a full on body attack forgetting the head until the supreme…

[QUOTE=OldTerry;19110032]Golovkin won the first fight and it was called a draw. He out landed Canelo in the second fight and lost by a narrow decision. Canelo looked like the better fighter but darn it you are not supposed to win…

No i think GGG needs to either fight a guy like Murata for a big payday and not alot of risk or, move up and fight at 168. I think he would be better and the guys at 168 at…

Abel nope just no. It may take a while but GGG needs to build up momentum again. Needs to rematch Jacobs, Fight Charlo, Andrade if Canelo fights Saunders and beats him then fight Saunders. Right now keep GGG away from…

This match up definitely deserves a third fight. Although my gut tells me there's going to be a minimum of 4. I expect GGG to win the 3rd fight and they'll have a deciding 4th fight in 2020. They're going…