Sanchez: I'll Be A Whole Different Fighter Against Diaz Than In Loss To Valdez

Jason Sanchez realized during his recent training camp that he had to be better prepared if Christopher Diaz doesn’t fight him the way Sanchez expects.

Sanchez says he wasn’t really ready for Oscar Valdez doing anything other than attacking him and making their bout a brawl. When Valdez, then the WBO featherweight champion, took a more tactical approach to their 12-round, 126-pound title fight, Sanchez couldn’t adjust and lost a lopsided unanimous decision.

A year and two weeks after Valdez defeated him in Reno, Nevada, Sanchez intends to upset Diaz on Tuesday night in Las Vegas and record what would be Sanchez’s most noteworthy win in 7½ years as a pro.

“He’s a strong fighter,” Sanchez told BoxingScene.com. “He comes forward. He’s been in there with world champs, too. I know he can fight. But I know he’s not too good with movement. He’s been practicing that recently, but I’ve been looking at videos and I believe I can beat him.” 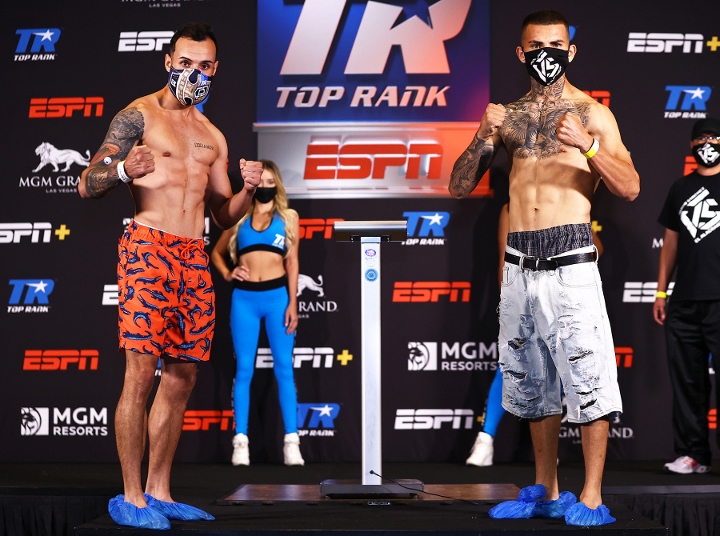 The 25-year-old Diaz dropped a 12-round unanimous decision to Japan’s Masayuki Ito (26-2-1, 14 KOs) in their fight for the then-vacant WBO junior lightweight title in July 2018 in Kissimmee, Florida. Two fights later, Shakur Stevenson (14-0, 8 KOs), who since has won the WBO featherweight title, defeated Diaz by 10-round unanimous decision in April 2019 at Madison Square Garden in New York.

“I learned a lot from that fight,” Sanchez said. “I know I was getting caught a lot with the left hooks, and I got caught with some simple jabs. We practiced on that a lot. I know I needed to work on my movement as well. I expected him to be more aggressive, and he ended up just kind of boxing. I thought he was just gonna come straight at me and make it kind of like a brawl. But no, he was moving and being more patient. So, with this guy, we trained for both.”

“It’s a great opportunity for me,” Sanchez said. “Especially with it being on ESPN, there will be a lot of people watching. Hopefully, everything turns out good, I get the win and move on to something better, closer to a world title fight again soon.”

First post-lockdown bet for yours truly, I put money on both a KO win for Sanchez and a draw. Wasted money, probably, but one never knows...