The first All-Russian Boxing Forum, organized by the Russian Boxing Federation in the Russia's westernmost city of Kaliningrad, was capped off by a huge event, staged by the Patriot Boxing Promotions. Two talented welterweights led the card, and they got local crowd (which included world champions Nikolay Valuev, Dmitry Bivol, Dmitry Kirillov, Grigory Drozd and Natalia Ragozina to name a few) their money's worth with a high-octane chess match.

Vorobiev, 25, put his name on the radar a year and a half ago, when he scored a huge upset, winning over 34-0 Konstantin Ponomarev. Chukhadzyan, 23, meanwhile showed his best skills in edging out some huge wins in Kiev, Ukraine, including those over Guadalupe Rosales and Ali Funeka.

On fight night, Vorobiev wasn't a huge challenge for such a smooth operator as the Ukraine-based Armenian. The Russian tried to load up with one or two huge shots but to little success. Chukhadzhyan wasn't wasting his energy, and his actions were rare but mostly spot on. He was elusive, when Vorobiev tried to get to his body and also used his own sudden attacks to score from different angles. The ending rounds of this ten-rounder were especially telling, as Chukhdzyan scored in bunches against usually a very tough opponent.

Final scores were: 96-95 - for Vorobiev, 96-94 and 99-91 - for Karen Chukhadzyan via a split decision. The Ukrainian acquired a vacant WBA International welterweight title in process.

Russian light welterweight champion Georgy Chelokhsaev (18-1-1, 12 KOs) was forced to go the distance for the fourth consecutive time as he scored a hard-fought victory over South African veteran Prince Dlomo (11-10-1, 4 KOs). The fight was scheduled for eight, and Dlomo gave fits to his opponent. BoxingScene had it 77-75 - for the Russian, while official scores weren't announced.

Rustam Tulaganov, 2016 Rio bronze medalist for Uzbekistan, continued his revived boxing career with a solid unanimous decision over rugged Polish journeyman Norbert Dabrowski in a close fight, which exploited some of Rustam's limitations but also reminded of his strengths. Lanky Tulaganov was well prepared for what the Polish fighter offered to him and used his jab and refined boxing techniques to keep Dabrowski at bay. Tulaganov is now 3-0, 1 KOs, while the guest fighter is less lucky with 23-9-2, 10 KOs. 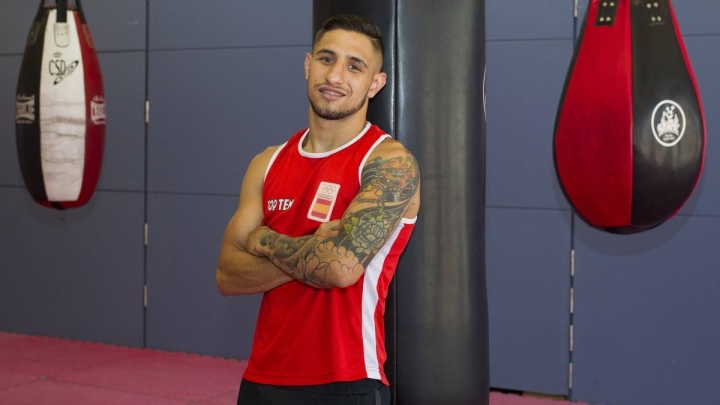 Rising Spaniard Samuel Carmona was his usual explosive self in a one-round annihilation of Colombian veteran Jose Antonio Jimenez. Carmona, 23, immediately jumped at Jimenez and just overwhelmed his with a plethora of various punches.

Jimenez tried to find salvation but there was no sanctuary in the greenish ring. Finally, Carmona, who is promoted by the Russian Patriot Boxing Promotions, caught Jimenez with a double left hook to the head, effectively ending the fight at 1:33 of the first.

Carmona, 2016 Olympian for Spain, acquired a vacant WBA International flyweight title and went up to 4-0, 3 KOs, with two wins in Russia. Jimenez, who had a win over former WBC mimumweight champion Xiong Zhao Zhong and a stoppage loss to then-reigning IBF minimumweight champion Jose Arguemedo - both in 2016, moved down to 22-11-1, 9 KOs.

Light heavyweights Sergey Gorokhov and Maxim Smirnov fought to a spirited six-round draw in a two-way action. Smirnov, 34, was successful early on with his short left hand and smooth, light footwork. Gorokhov, 29, came strong later on to utilize his jab and his savvy for a better fight. Both combatants fought it to the end. One judge had it 59-56 - for Gorokhov, but he was overruled by the other two who had it 57-57 - for a majority draw.

Interestingly, both fighters have been extremely inactive recently. Gorokhov (9-2-1, 6 KOs) hasn't fought since September 2017, when he upset Norse Tim-Robin Lihaug in Riga, Latvia (as a part of Mairis Briedis vs. Mike Perez showdown). Smirnov, meanwhile, fought for the second time in over eight years. Both fighters have never been stopped, though the lost to world titleholders in extremely varying weight classes: Smirnov - to WBA light welterweight champion Khabib Allakhverdiev in 2011, Gorokhov - to WBA cruiserweight regular champion Valery Brudov in 2013.

Former amateur standout and World Championship Boxing stalwart Pavel Silyagin debuted as a full-time pro and successfully took Polish journeyman Bartolomiej Grafka to the class for yet another boxing lesson. Silyagin (now 1-0) failed to deliver one finishing touch to complete his job in style but cruised to a one-sided unanimous decision over six nevertheless. Always willing (but not always mighty) and always active Grafka drops down to 22-37-3, 10 KOs.

Thai import Kaewfah Tor Buamas (aka Krai Setthaphon) was in a survival mode for all five rounds of his fight versus Moscow-based Russian prospect (and also a boxing trainer) Alexander Devyatov (8-0, 7 KOs). Tor Buamas was losing hopelessly but he was also game and stiff, preventing the Russian kayo artist to land cleanly. However, with each fought round his punch output decreased while punishment accumulated. The Thai (now 29-6, 19 KOs) chose to retire in his corner during the break between round five and six, citing an arm injury, which was hard to prove or to dismiss.

Two-time Uzbek national heavyweight champion Ulugbek Mubinov continued the string of winning debuts with the third-round stoppage of bigger Bosnian Srdjan Govedarica. Govedarica played it rough but also relied on whining and complaints. He talked much to referee Sergey Litunov but to no avail as the referee didn't find any blatant violations on the Uzbek's behalf. The end came at 1:14 of the third, when Govedarica was hit with what seemed to be a borderline punch to the back of the head. Govedarica went down crying foul and didn't get up until a ringside physician examined him for probably impaired vision. Govedarica failed to count the fingers properly leading to the stoppage. His hopes for a DQ (or, at least, for a No Contest) were, however, derailed. He is now 7-9, 6 KOs.

Hulking (6'5'') Russian cruiserweight-to-heavyweight (or, maybe, super cruiserweight) Vladimir Ivanov, a local hopeful and 11-time region's champion, debuted with the stoppage win over chubby Mexican import Carlos Carreon (8-7, 2 KOs). Ivanov was cautious early on and was aware of the Mexican's wild swings but then adjusted and started to pour punches. The end came in the fourth when Ivanov dropped Carreon with a liver punch for the count.

With just two minutes left in the sixth and final round, a towel was thrown to prevent Snamiso Ntuli of South Africa to take more punishment off the hands of debuting Russian Vadim Tukov. Ntuli is down to 4-4, 3 KOs. He was down briefly in the third.

Another of the recent stellar cluster of Uzbek talent made a successful start as a pro. Shukurdjon Rakhimov opened his six-rounder with a squall of hard punishing punches but was forced to go the distance against durable South African Ripfumelo “Noah” Chikwambana. Rakhimov cruised to a wide unanimous decision over six. “Noah” (6-4, 3 KOs) lost his fourth straight but he has never been stopped.

Two pro debutants opened up the card with a quickie, as super middleweight David Dzukaev, 20, floored Ivan Pavlovskiy thrice within 129 seconds to notch his first career win. Dzukaev is trained by Vitaly Slanov, who guided Murat Gassiev throughout the longest part of his career.