The action was non-stop. Ziani attacked non-stop from the first bell. For much of the fight, Dilmaghani matched him. Eventually the Frenchman just outlasted him.

The fight turned in the eleventh round, when Dilmaghani was visibly hurt for the first time. He was down four times in the last round, although referee Giuseppe Quartarone only ruled two knockdowns. Dilmaghani looked completely spent, though, and Quartarone should have stopped the action earlier than he did.

Two of the three judges had Dilmaghani ahead after 11 rounds, although the first ten rounds had been incredibly close. 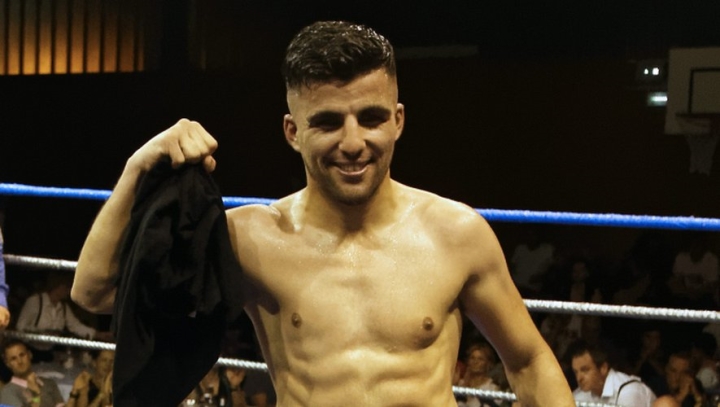 The champion had an excellent opening round as both stood toe-to-toe from the first bell, Dilmaghani landed some body shots early on, but Ziani came on strong and looked comfortable at close range, bustling Dilmaghani around and landing repeatedly with a left hook.

The second continued at a fierce pace, with Ziani blocking more shots than his English opponent, but Dilmaghani did better in the third, tightening up and landing shorter hooks. Dilmaghani seemed to hold the upper hand for much of the fourth round, but Ziani finished strong, ramming home a left hook right on the bell.

But Dilmaghani had more gears and moved to them in the fifth round, as he started to look comfortable and manoeuvre the champion around. Dilmaghani’s work wasn’t all legal, though, and he regularly used his elbow as an option, eventually getting a warning for it in the sixth round.

It was possibly an elbow from Ziani that caused a cut under Dilmaghani’s right eye in the sixth, the sight of blood inspiring the Frenchman into an impressive finish to the round and an excellent seventh, and he pressured Dilmaghani around the ring.

The eighth saw Dilmaghani get regain some control and in the ninth, a clash of heads left Ziani cut below the right eye, sparking an excellent finish to the round by Dilmaghani, as Ziani’s defences seemed to unravel under Dilmaghani’s steady onslaught.

The pace lagged a bit in the tenth, but both were still on all-out attack mode and they were relentless in the eleventh, Ziani coming forward non-stop as Dilmighani tried to match him. But the Frenchman was now stronger. After one attack on the ropes, Dilmaghani was thrown across the ring and, after the follow-up attack, he looked hurt by a three-punch combination and staggered back.

It was all about survival for Dilmaghani now. Trapped on the ropes, he tumbled to the floor, but referee Quartarone ruled it a slip. Ziani kept the pressure on an Dilmaghani was knocked down into the ropes, although Quartarone did not count.

Ziani was now landing punch after punch and eventually a clubbing left sent Dilmaghani to the floor with 30 seconds remaining, As he rose, he seemed to have no idea where he was by Quartarone waved him back in. When Ziani landed again, he sent Dilmaghani flying back into the ropes, but Dilmaghani made it back to his feet again. This time, Quartarone stopped it. The official time was 2:51 of the last round.

A dazed Dilmaghani was led from the ring by paramedics before Ziani was presented with the belt.

Isaac Chamberlain needed just 50 seconds to stop Matt Sen in the first round of a scheduled eight, his second win in two weeks.

Chamberlain rocked Sen with a left hook just 35 seconds in and didn’t let him off the hook, trapping him in a corner and hammering home hard punch after hard punch, including three brutal uppercuts before Mark Lyson, the referee, leapt in between them.