Sahir Iqbal overcame the toughest test of his career to remain perfect as a pro.

Ian John Lewis scored the contest 78-74 in favor of Iqbal, while Victor Loughlin 78-75 had it and Mark Lyson seeing it the closest at 77-76. 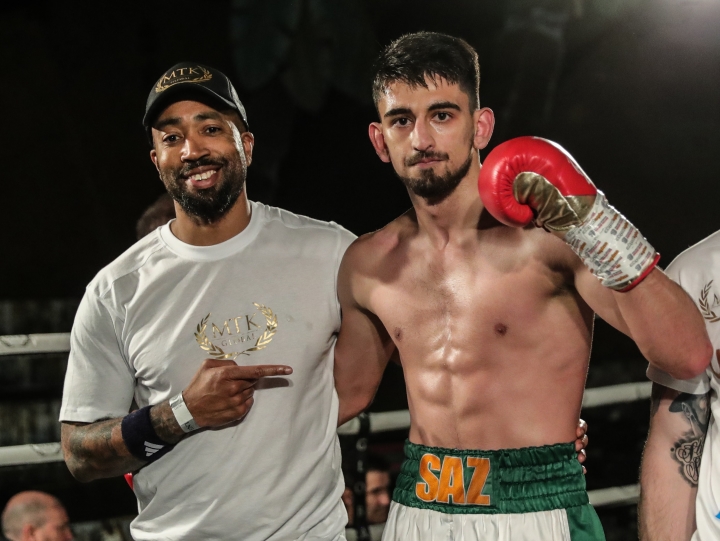 The bulk of the eight-round bout between unbeaten 24-year old prospects was spent at close quarters, a tactic which favored Thomas particularly in the early going. Iqbal was at his best in the moments where he was able to land counter right hands which helped create his desired space, although he was forced to work in order to create those moments.

Thomas constantly moved forward, shooting his jab and following up with a straight right though often falling short on the latter. His aggressive style clearly served as a source of discomfort for Iqbal, who was far more interested in turning a fight into a boxing match.

The threat of that momentum shift came in round three, when Iqbal was able to force Thomas to follow him around the ring. The three-minute frame wasn’t without its offensive flow, as Iqbal connected with a right uppercut during an inside exchange for what was his best punch of the fight to that point. Iqbal controlled most of round four on the strength of his jab and also long right hands over Thomas’ high guard.

Round five was the most clear-cut for either fighter, one where Thomas controlled the bulk of the action. The unbeaten Welshman landed a right hand to freeze Iqbal in his tracks, making it that much easier to cut off the ring and keep the Bolton product well within his desired punching range.

Iqbal sought to box and move in round six, successful at times though still forced to contend with an onrushing Thomas. The pattern held true in round seven, where Iqbal found success fighting in reverse after implementing a feint into his repertoire. The tactic slowed down Thomas just enough to allow Iqbal to avoid having to fight at a phone booth’s distance.

Sensing the fight was slipping away, Thomas picked up the pace in the eighth and final round. Iqbal (8-0, 1KO) struggled to find his range, whether through fatigue or his opponent finding his second wind. Thomas landed lead right hands, twice pinning Iqbal along the ropes though unable to land that final shot to end the fight. Iqbal spent most of the round playing defense, allowing Thomas (11-1, 2KOs) throw at will without fear of the incoming even if his biggest punches often fell short.