The Japanese southpaw out-worked a comparatively inactive Marlon Tapales before blasting Tapales with a left hand that ultimately ended their scheduled 12-round fight in the 11th round at Barclays Center in Brooklyn. Iwasa’s perfectly placed overhand left knocked Tapales underneath a bottom rope with 2:09 to go in the 11th round.

That made Murdaugh halt their fight 1:09 into the 11th round.

The 29-year-old Iwasa (27-3, 17 KOs) won the IBF’s interim junior featherweight title. Iwasa lost two of his previous three title fights – a unanimous decision to the since-dethroned Doheny in August 2018 and a sixth-round TKO to Lee Haskins in June 2015. 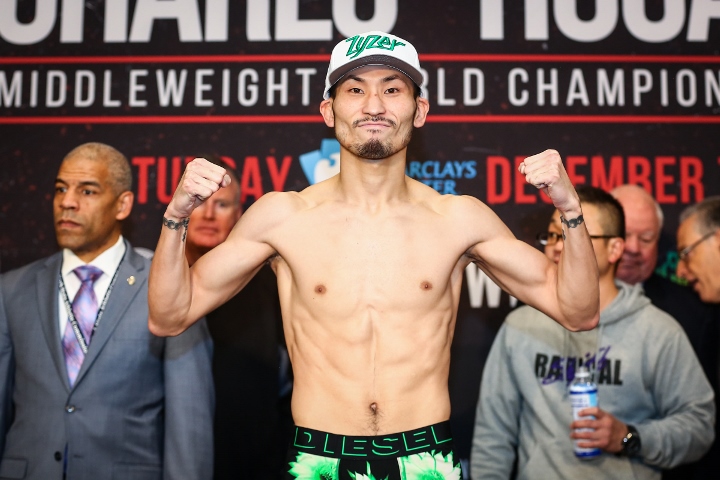 Iwasa’s win on the Jermall Charlo-Dennis Hogan undercard moved him into position to fight Daniel Roman, who owns the IBF junior featherweight title.

Before scoring a technical knockout, the taller, rangier Iwasa was winning this battle between southpaws by being aggressive throughout their bout and by boxing from a distance that helped him work off his jab and land occasional left hands. The Philippines’ Tapales (33-3, 16 KOs), a former WBO bantamweight champ, largely threw one punch at a time, often wildly, and fought off his back foot.

Iwasa was in complete control during the eighth, ninth and 10th rounds, and appeared well on his way to a convincing victory before stopping Tapales.

Tapales caught Iwasa with a right hook and then a straight left with just under a minute remaining in the fifth round.

Barely a minute into the third round, Iwasa landed a left hand that knocked Tapales off balance. Tapales went down to one knee with 1:39 to go in the third round, clearly from an accidental head-butt, but Murdaugh called it a knockdown.

Iwasa and Tapales took their time feeling each other out in the first round. Neither fighter landed many punches in those opening three minutes or in the second round.

Congratulations to Iwasa! I don't think many gave him a chance.

Good win for iwasa! I thought tapales was going to stop him!