Tony Sims, head trainer of John Ryder, is hoping his man lands a big fight in 2020.

Ryder has been out of the ring since last November, when he lost a tough twelve round decision to WBA super middleweight champion Callum Smith.

There were many observers who felt Ryder had done enough to pull off the win against Smith. 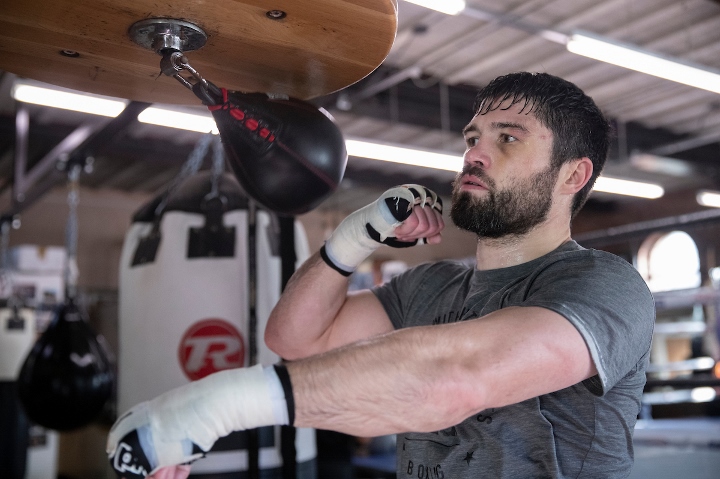 As BoxingScene.com previously reported, Ryder is one of several names in the running for a September date with Mexican superstar Saul "Canelo" Alvarez.

However, Canelo's handlers admit that their preference is to secure an opponent from the United States - to avoid any issues related to COVID-19 travel restrictions.

If Ryder is unable to get a fight with Canelo, then he would like to face WBO super middleweight champion Billy Joe Saunders.

Saunders won a razor close twelve round unanimous decision over a then unbeaten Ryder in 2013. They share the same promoter in Eddie Hearn of Matchroom.

"I want to right all these wrongs," Ryder told Sky Sports. "The Billy Joe fight was close. I believe I nicked it. He believes he nicked it.

"We get on well and the rematch didn't materialise with rival promoters, but now we're under the same promotional banner, these fights will be easy to make.

"I want to fight any of the champions. Ideally get the rematch with Billy Joe or Callum Smith, the likes of [David] Benavidez and [Caleb] Plant. I just want the best fights out there."

Sims felt the Saunders-Ryder fight should have been a draw and he obviously felt his man did enough to beat Smith last year.

"If this Canelo fight doesn't happen, I would like John to fight Billy Joe Saunders again," Sims told Sky Sports.

"I've always called for that rematch. I know Billy Joe and John are quite friendly, but at the end of the day it's a business and John has got a family and bills to pay. If Callum Smith won't give John Ryder the rematch and it doesn't look like he's going to give it to him, he don't want to fight him, then Billy Joe, I'd like that fight with Billy Joe. We've got three top super middleweights in the country, in those three. If it doesn't materialise with Canelo, then the three should fight each other in a triangle and see who is the best."

Billy Joe could rematch either Chris Eubank Jr. or John Ryder, and they would both be great fights. Failing that, why not Eubank Jr. vs. Ryder?

Smith/Gallagher obv don't want that rematch. Saunders probably doesn't either. Both just looking to protect their "titles" whilst hoping for that Canelo payday. Both fights relatively easy to make but if Ryder was to win a rematch with either of…

Great fight. He can beat BJS. BJS has only one decent win in his career against an overrated Canadian & he went life/death against Eubank Jr. who's a terrible boxer in the ring but a machine in sparring & training.…

I would bet big money on Ryder beating the sportsbra'd wonder,BJS is not beating anyone good unless he becomes someone else overnight & actually started training & stopped being a loser looking for easy paydays,Saunders is the definition of everything…

John ryder beat Smith fair and square, even a blind man could see that, he was robbed to protect the house fighter and his date with canelo at the time, simple! John deserves the rematchs or a big name fight,…