Ryan Garcia: Words Are Cheap, I'm Ready To Show What I Can Do

Lightweight contender Ryan Garcia is ready to prove the critics wrong, when he faces dangerous Romero Duno on Saturday night at the MGM Grand in Las Vegas.

The contest will be showcased as the co-feature to the highly anticipated fight between Mexican superstar Canelo Alvarez and WBO light heavyweight champion Sergey “Krusher” Kovalev.

A few months ago, Garcia was scheduled to face Avery Sparrow - who fell out of the contest, due to legal issues, on the day of the official weigh-in. 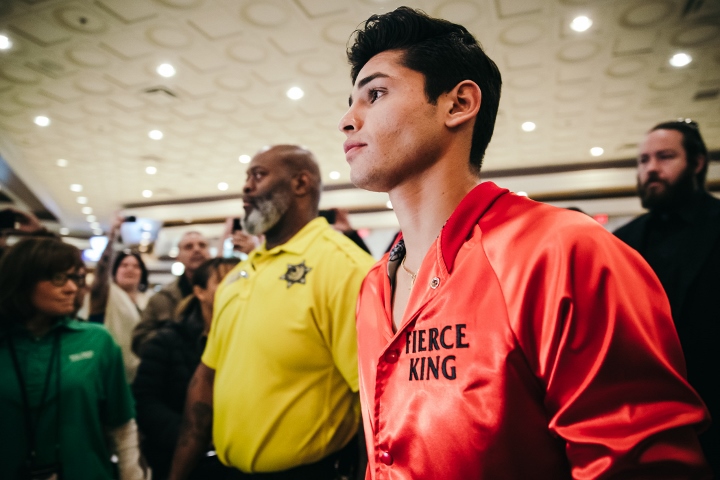 When Sparrow fell out, Garcia was offered the scenario of facing Duno, who was scheduled to fight on the same card. But Garcia and Golden Boy Promotions were too far apart on the money.

When he walked away from the fight, Duno and his handlers felt Garcia was avoiding a dangerous late replacement.

“I’m here now, it don’t matter what he was thinking [when I didn't take the fight]. I’m here now, I’m ready to do my thing Saturday night and prove that I’m the better fighter. Words are cheap, I’m just ready to show what I can do,” Garcia said.

Now that he's facing Duno in a few days, Garcia has no idea what to say to the critics who felt he was running from Duno.

“I don’t know what it says to them, that’s up to their own judgment. I believe in myself and my team believes in me and that’s all that matters. This is a big moment and a big time in my life, so thank you all for your support,” Garcia said.

According to Duno, he is not holding a grudge against Garcia for refusing to facing him earlier this year.

“No, I respect the decision because I know that King Ryan had already prepared for a different opponent, and that’s why he didn’t accept the offer. It feels so good. I’m so thankful to Golden Boy Promotions and to Oscar for putting me on this big card," Duno said.

You should had never taken this fight Ryan Garcia, you are gonna get k.o. Duno is another manny Pacquiao...don't see you winning this one I really hope you prove me and the critics wrong I truly doubt it

This mofo called him King? Awe he's getting his ass beat. Duno is done yo.

Taylor is ok, he won in the ring, no outright robberies. My issue is the homieness, "I cant lose in the Hydro". Neutral sites? The monster in Japan isn't right either.

I don't mind a fighter being confident of his skills but Garcia is just arrogant. He is becoming one of the few fighters that I want the opponent to shut his mouth.

[QUOTE=factsarenice;20153116]Rematch...I want a rematch in the states, Las Veges/ Taylor vs Regis Prograis at 140... Tight fight, can Prograis be pushed back without the use of shoulders and elbows?[/QUOTE] Regis Prograis should of boxed from mid-range a bit more, Taylor…