Ryan Garcia Points To Manny Pacquiao as The "Dream Fight"

Garcia was dropped hard in the second round - and proved his worth as a real fighter when he recovered, took over the fight, and knocked Campbell out in the seventh round with a vicious body shot. 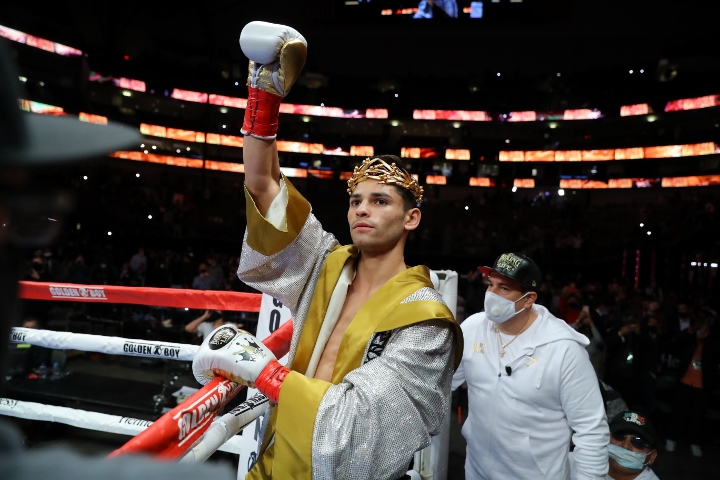 But, the rising star appears to be more motivated to secure a fight with WBA 'regular' champion Gervonta Davis.

Garcia admits that his dream fight is a showdown with WBA welterweight champion Manny Pacquiao, who at 42-years-old is still regarded as one of the biggest stars in the entire sport.

"That's the dream. Manny is a legend and it would be like surpassing him in the humblest way. I don't want this to sound like I'm being disrespectful, Manny knows my respect for him," Garcia told ES News. "People love him because he fights with his heart. You don't even have to tell people to respect him, because more than one entire country supports him."

Garcia and Pacquiao are two divisions apart - although they are similar in size as the Filipino superstar is a small welterweight.

Back in 2008, Pacquiao made the jump from 135 to 147 and became a mega-star when he dominated and stopped Oscar De La Hoya in a very unexpected one-sided fight.

In the coming years, the 22-year-old Garcia is likely going to make the jump to junior welterweight and eventually to welterweight.

Pacquiao has been out of the ring since July of 2019, when he secured a twelve round split decision over Keith Thurman to capture the WBA title at the MGM Grand in Las Vegas. He plans to return to the ring in 2021 - and seems to be focused on WBC, IBF welterweight champion Errol Spence and UFC superstar Conor McGregor.

Oh Ryan oh Ryan....he wants to get right to a money fight when he won't even face the other credible names in his division...and to that I say.... "If you are what they say you are....a superstar...then HAVE NO FEAR....the…

That's nice to hear that from Garcia. It's a sure cash to land a fight with Pac. Pac maybe old but still packs speed and much power. Interesting!

Watch el Gallo box and watch Ryan. Everybody was talking about Wilders power and look what happened. Ryan needs to watch Estrada, he's a proven craftsman.

Pac dances around him and peppers him all night. That is quite a jump in level of fighters Ryan is thinking about.