Although the boxing schedule has been decimated by the coronavirus pandemic it has not stopped top lightweight up-and-comer Ryan Garcia from staying in shape, working on his skills and thinking about the big fights that could loom in his future.

Garcia, the 2017 ESPN prospect of the year, is hunkered down at a rented house in San Diego – where he is building his own home – working out in a makeshift gym in the garage.

“I’ve been staying in shape like crazy. I could fight tomorrow,” Garcia told BoxingScene.com. “I’m not only training, I’m studying.”

“A lot of Robinson though,” he said.

The 21-year-old Garcia (20-0, 17 KOs) is coming off a series of impressive early knockouts of reputable opponents. He blitzed Jose Lopez in the second round, then Romero Duno with one shot in the first round and in his most recent fight, on Feb. 14 in a DAZN main event, crushed former two-time world title challenger Francisco Fonseca in the first round. Fonseca’s only previous losses came in junior lightweight world title fights – a decision to Tevin Farmer in 2018 and eighth-round stoppage to Gervonta Davis in 2017 in a fight for which Davis missed weight.

Garcia’s recent wins have been so impressive that Golden Boy Promotions, his career-long promoter, was making plans for Garcia to face former three-division world titlist Jorge Linares – who knocked out Carlos Morales in the fourth round on the Garcia-Fonseca undercard – on July 11. Because of the coronavirus outbreak that date is off but Garcia said he will still face Linares once boxing resumes.

“Obviously, there are no fights coming up and you can’t train for a specific fight but in my mind I’m training for Jorge Linares,” he said. “I knew I wouldn’t have trouble with Fonseca like Gervonta did. When I got in there I caught him. I knew people would say I need to do something more to prove myself so I said (I want to fight) Linares.”

While Garcia may be training for Linares (47-5, 29 KOs), he has also been thinking about other young and talented lightweights he said he hopes to make major fights with, namely titleholders Teofimo Lopez Jr. and Davis and WBC titlist Devon Haney, who only lost his belt when he was stripped due to a shoulder injury and might be reinstated.

“All these prospects talking all this big talk but name one of them who has fought somebody the caliber of Linares,” Garcia said. “They haven’t. They have not. Jorge is dangerous. He has speed and power. He might not have the best chin but he’s a dangerous fighter. He’s fast and he beat Luke Campbell. At 135, he is at his best. So when I beat him I really don’t want to hear anything from these prospects.

“They might fight guys with a high ranking. I’ll give them that, but that doesn’t necessarily mean they’re great. I’m speaking abut Devin Haney, Teofimo Lopez, Gervonta Davis. They don’t impress me. The fighters they face don’t impress me.  They might say the same thing about me, but guess what – I’m knocking (my opponents) cleanly out and really quick. But Lopez – he almost lost to (Masayoshi Nakatani in a title eliminator last July). You talk all this stuff about me, say I’m not very skillful, I’m not very this, I’m not very that. But when I look at history I see Robinson and Muhammad Ali. They might not look like the most skilled fighters technical-wise but there’s a rhythm to them, a movement, a beat. It’s called old-school boxing and I’m developing that in a modern way.” 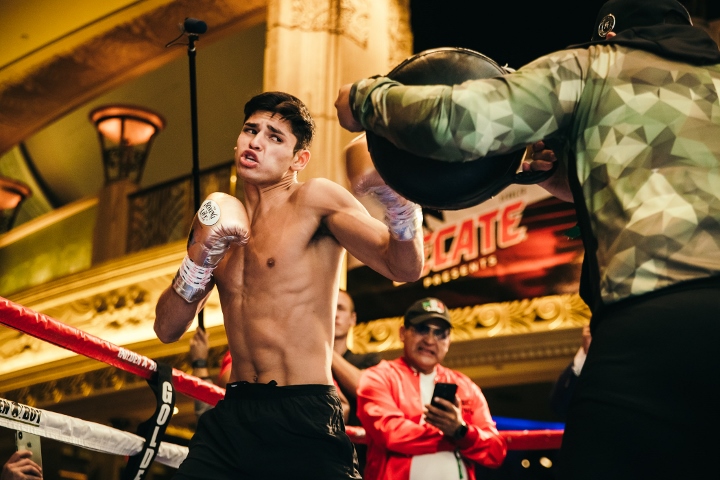 Garcia was in part responding to recent critical comments Lopez made about him to BoxingScene’s Keith Idec.

“I haven’t been impressed by Ryan Garcia at all,” Lopez said. “But I feel like if he beats Linares in good fashion, then I’ll take my hat off to him. I’ll be like, ‘OK, he got a little something.’ But it still won’t faze me. The thing is they put these kids up there fast, and I get it. They’ve gotta take care of them, they’ve gotta get them in fights and they’ve gotta make it look good. That’s what matchmakers do. But Ryan Garcia, to me, is Oscar De La Hoya without the skills. He has a fan base, he has the platform, he has everything he needs. The only thing he doesn’t have is the skill set. He’s not that great.”

Garcia said he gives Lopez credit for his second-round knockout of Richard Commey to win a world title on Dec. 14 but he won’t concede much else.

“I’ll give credit where it’s due. He had a great victory in that fight but to me Commey I didn’t see anything super natural,” Garcia said. “Their argument with me is I haven’t been in there with anybody. Let’s stop saying that. And Haney always makes the argument I need to fight this guy or that guy and that I haven’t fought anybody. But we could all say that about all of us. Let’s make these fights happen. I truly want to see who’s the best.

Davis is likely to next face four-division world titlist Leo Santa Cruz when boxing resumes, but Garcia wants him after that.

Garcia said he believes when it’s all said and done he will be the one standing atop the heap of the young stars in the lightweight division because he is not trying to copy anyone else like he believes Lopez, Haney and Davis are.

“What ruined boxing was when Roy Jones Jr. was so talented that everybody wanted to fight like him and Floyd Mayweather, to me, looked up to Roy Jones Jr. and he was so physically talented that he was able to do the same type of moves,” Garcia said. “And all these guys coming up right now, they’re all trying to be Floyd. And guess what? Not all of you guys have the physical talent and reflexes Floyd and Roy Jones Jr. had. You don’t have it, so please stop.

“What happened to (Adrien) Broner will happen to Devin and it’s definitely going to happen to Teofimo Lopez. They all try to do the shoulder roll. They all want to be Floyd Mayweather. And I will also throw Gervonta in there. He wants to be like his boss (at Mayweather Promotions). You are not Floyd Mayweather. I’m trying to be the next Ryan Garcia. I take things from all the great fighters and I’m trying to create my own thing. I’m not Floyd. I understand that. To me he’s a better businessman than a fighter, but that’s just my opinion.”