Ryan Garcia: My Return In Aug/Sept Will Be Bigger Than Top Rank On ESPN - Everyone Will Be Watching

Ryan Garcia is stuck on the sidelines watching the sport he’s been billed to star in move forward without him, at least for the time being.

Although Top Rank Boxing returned to ESPN with a slew of shows in June, and will do so again in July, Garcia (20-0, 17 KOs) strongly believes he will be the ultimate showstopper once he finally gets back into the squared circle.

“It’s extremely frustrating. I hate looking at [the Top Rank fights on ESPN]. It pissed me off. I feel like when my time comes, it’s going to be even bigger. I watch the fights, and I think, ‘That’s cool, but when I come back, everyone is going to be watching,” said Garcia. “I’m thinking August or September [will be my next fight. I know something significant is happening in December if we can get it made, but I can’t go into that.” 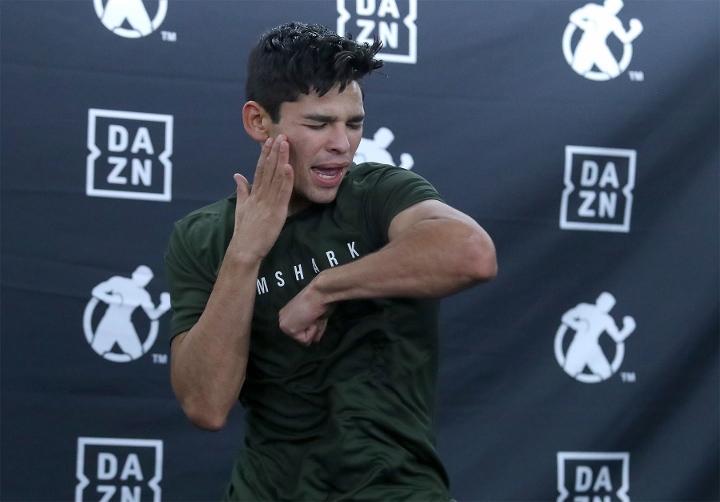 Garcia was penciled into mark Golden Boy’s return to boxing on July 4 but a deal could not be agreed upon because the fighter was unhappy with his purse. A spat even ensued shortly thereafter between Garcia and promoter Oscar De La Hoya.

Garcia said he wants to concentrate on what he offers inside of the ring rather than deal with the distractions outside of it.

“I’m trying to fight. That’s all I want to do. People may have their own opinions on me, but I definitely love boxing. I’m in a position where the public is demanding that I fight people, and I’m 21 and not even a world champion,” said Garcia. “I’m fine with that because I know I have it in me. I have the speed, power, and talent. It’s not like I’m barely beating these guys that I’m supposed to beat. I’m obliterating them in one round. I just want my chance to prove to the world that I am what I say I am.

“I know that for a fact. What I do bring is unexpected. My accuracy is what separates me. Forget my speed; forget my power. I have really good timing. I know people will see that later on in my career. My timing is really good.”

The WBC recently ordered Garcia to fight Luke Campbell for the interim-lightweight world title, but there is no word on when or where that fight will happen.

[QUOTE=KingOfGlory;20641129]Nobody outside the hardcore even know who you are.[/QUOTE] You are not pat of the hardcore fans with that stupid comment.

I don’t even know who he is lol

[QUOTE=redrick;20641080]needs to fight some body good that last fight was crap I mean boxing is all about the glossy records 20-0 and that does;it mean you can fight you look at the MMA fighters 20-9 losses thoses guy can fight…

Fight someone like JoJo Diaz. Isn't he with GBP too? Haney? He has no fight scheduled. I personally don't care to see a Campbell or Linares fight. Fight someone young and fresh. Too many around these days.