The opponent Ryan Garcia could fight next if he wins Friday night was seated on stage with him Wednesday.

Garcia isn’t thinking about Jorge Linares just yet, though. The undefeated lightweight contender is fully focused on Francisco Fonseca, whom Garcia will encounter in a 12-round fight Friday night at Honda Center in Anaheim, California.

“This is the first fight of 2020, with a great opponent, you know, Francisco Fonseca,” Garcia said Wednesday during a press conference at Honda Center. “Tough fighter, you know, been in there with a lot of good fighters and gave them a lot of good work. So, you know, this gives everybody a chance to see how good I am. So, I’ve worked hard for this fight. I gave it all I got, you know? No matter what, I was like, ‘I’m going hard.’ This guy’s gonna bring it, so I can’t take nothing lightly. You know, I’m not looking forward to the next fight [pointed toward Linares] or the fights coming up. I’m looking forward to this guy right here. And I can’t look past nobody, you know? So, it’s gonna be a good one.” 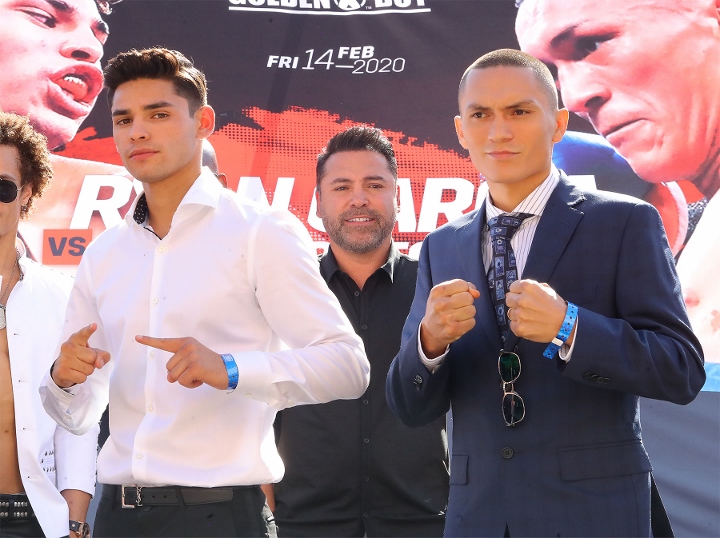 Baltimore’s Davis knocked out Fonseca in controversial fashion in the eighth round on the Floyd Mayweather-Conor McGregor undercard in August 2017 at T-Mobile Arena in Las Vegas. Farmer, then the IBF junior lightweight champ, convincingly defeated Fonseca by unanimous decision in their 12-round title bout in December 2018 at Madison Square Garden.

Linares (46-5, 28 KOs), a former WBA and WBC lightweight champion, will face Carlos Morales in another 12-rounder on the Garcia-Fonseca undercard. Garcia beat Morales (19-4-4, 8 KOs) by majority decision in their 10-rounder 17 months ago, but Morales buzzed Garcia with a jab in the seventh round of that bout and Garcia held a lot during the final four rounds.

If Garcia and Linares win Friday night, they could box next. The 34-year-old Linares has been stopped five times in his career, but the Venezuelan veteran would be the most accomplished, experienced opponent for Garcia since he turned pro in June 2016.

“This is the year to show everybody that I got the skills and I got the talent and I got the mentality to become a world champion,” Garcia said. “You know, like I said, this year all I wanna do is take on the big challenges. All I wanna do is to show everybody and prove to everybody that I put in so much work and so much determination every day, day in and day out. You know, I stay in shape after my fights and I sacrifice a lot of things just to become a better fighter.”

[QUOTE=kidbazooka;20388801]Payoff is Haymons style not oscar. And I guess you didn’t see Linares get ktfo in 1 rd by Cano lol. Ryan is no pitty pat puncher like Loma he’ll flattened Linares brutally.[/QUOTE] That's cause Linares had no business being…

[QUOTE=indelible;20387618]Same. Oscar wants that fight next but Reynoso knows Ryan is nowhere near ready for Linares. I watched the press conference yesterday and Oscar mentioned something about a bonus for Fonseca and couldn't help but think that "bonus" is extra…

Ryan Garcia should improve defense and allow himself to be hit in sparring just like Monster Inoue!

[QUOTE=Boxing Hero;20387447]Ryan Garcia vs Linares would be epic! I have Linares winning that fight by KO[/QUOTE] Im not even sure linares will make it past morales .

[QUOTE=Boxing Hero;20387447]Ryan Garcia vs Linares would be epic! I have Linares winning that fight by KO[/QUOTE] Same. Oscar wants that fight next but Reynoso knows Ryan is nowhere near ready for Linares. I watched the press conference yesterday and Oscar…