Former WBA super middleweight champion Fedor Chudinov (22-2, 15 KOs) is looking for a firm comeback to the very top of the world even (all the more so) if this means a collision with arguably the #1 fighter in the world P4P.

“We are looking for an upcoming decision of the World Boxing Association on the status of Fedor Chudinov”, said his representative Vladimir Hryunov to the TASS media agency. “We hope for a mandatory challenger position to the title, currently owned by Canelo Alvarez. Fedor is going to have a preliminary fight, most probably on Sep. 12 in Khimki, Moscow Region”.

Chudinov, 32, is the WBA Gold 168lb champion – the belt, he has earned with a shutout decision over former middleweight titleholder Hassan N’Dam N’Jikam in December 2019, which capped off a very productive year with four wins, three of them – over Wuzhati Nuerlang, Rafael Bejaran and Ezequiel Oswaldo Maderna – inside the distance. 2018 was by far less successful for Chudinov, who “suffered a win” over Nadjib Mohammedi in a highly controversial way on the undercard of WBSS Season 1 cruiserweight Finale.

Saul “Canelo” Alvarez is the WBA regular champion, while the “Super” title belongs to Callum Smith, the winner of the other WBSS Season 1 Finale. Recently, Cuban David Morrell outpointed Guyanese Lennox Allen to capture the WBA Interim super middleweight title in the weight class, which already has way too many titleholders by one sanctioning body. Meanwhile, Chudinov is still listed fighting Spaniard Ronny Landaeta on August 22 in Kazan.

The show will be co-promoted by A Angels and Ratel Pro Fight with a support of the Russian Boxing Federation. 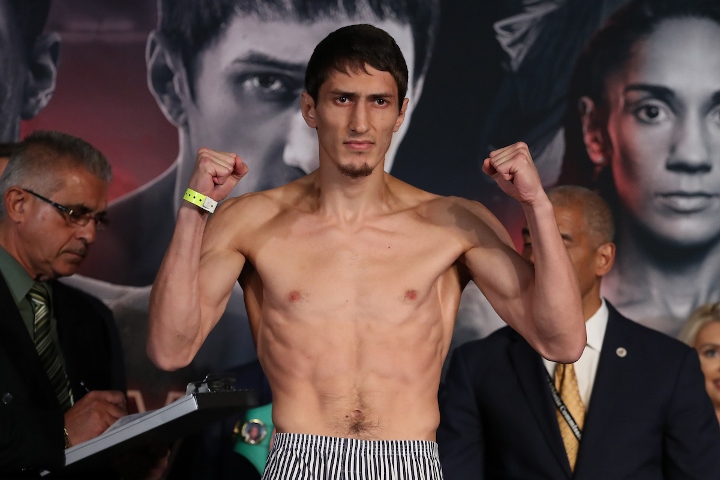 Titov/RCC Boxing Promotions, a huge Ekaterinburg-based promotional outfit led by German and Alexey Titov, will stage a solid card on August 22 at the RCC Boxing Academy, which unsuccessfully coincides with a huge show in Kazan, after the latter was moved from Aug. 15 in Sochi for COVID-19 reasons.

In the main event, WBC #7 ranked Russian Zaur Abdullaev (11-1, 7 KOs) and WBC #30 Pavel Malikov (16-1-1, 6 KOs) in a solid ten-round match-up. Abdullaev is coming off a defeat to rising star Devin Haney in September 2019, while Malikov is four fights removed from his own loss to established contender in Daud Yordan. His latest win was over former world title challenger Isa Chaniev in a close fight. Malikov is also rated #8 by the IBF and #12 by the WBO.

YUKA Promotions came back with a bang this past Monday in Moscow, Russia, although the card was different to its original roster for various reasons, including COVID-10 reasons.

In the main event, light middleweight Khuseyn Baysangurov (17-1, 15 KOs) continued his recent streak of stoppages with a three-round stoppage of journeyman Pavel Mamontov (12-11-2, 1 KO), who has lost his seventh straight. Mamontov was coming off a loss to Sergey Vorobiev in early July and was stopped for injury reasons.

[QUOTE=Mammoth;20719192]Abdullaev stopped Malikov I think. Not sure where we are on the Papin-Fayfer card. Anybody got a stream?[/QUOTE] 7th rd KO body shot stoppage for Abdullaev, come join the RBR I linked you to

Abdullaev stopped Malikov I think. Not sure where we are on the Papin-Fayfer card. Anybody got a stream?