Russell: I Compete Only Once A Year Because Guys Won't Fight Me

Showtime’s moderator wanted to know if this would be the calendar year within which Russell actually fights twice. The WBC featherweight champion smiled, as inactivity is one of the things he is most asked about. 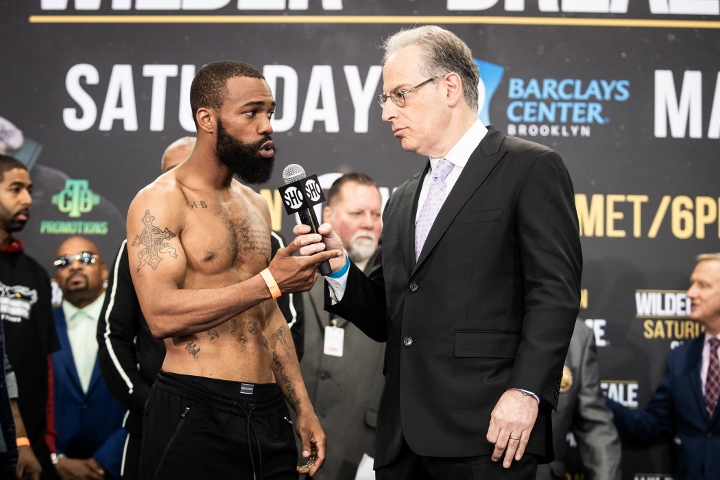 The Martinez match will mark just the fourth fight for Russell (29-1, 17 KOs) since he knocked out Jhonny Gonzalez in the fourth round to win the WBC 126-pound championship in March 2015. The Capitol Heights, Maryland, native fought once a year in 2016, 2017 and 2018.

“It’s possible,” Russell said. “It’s very possible. Is this the year that any of the other world champions will be willing to step in the ring and compete against me? You know, everybody say I’m only competing once a year. To the fans that don’t know, I’m only competing once a year because none of these other guys are in a rush to get in the ring with me. You have to understand that we get paid based upon our ability to be able to produce. Those chances are very, very low [for potential opponents].

“They’re not willing to put their family and their livelihood on the line and step in the ring with a Mr. Gary Russell Jr. They know the hand speed. They know the punching ability. They know everything that comes with it. Like I say, [Martinez] prepared himself to be able to last or withstand the punishment that I’m gonna be giving him come Saturday. Point blank, period.”

The 2008 American Olympian is a 50-1 favorite over the 33-year-old Martinez (39-8-2, 28 KOs), who has been stopped by Carl Frampton, Scott Quigg and Santa Cruz. The Russell-Martinez match will be the second of three bouts broadcast by Showtime from Barclays Center in Brooklyn (9 p.m. ET/6 p.m. PT).

Russell is doing himself a disservice by fighting so little. Just because the other titlists avoid you doesn't mean that you should completely place your career on halt. Russell never maintains any momentum/relevancy BECAUSE of his inactivity. If he is…

[QUOTE=bronx7;19752427]So where is he chasing Lomo to avenge his embarrassing loss where the self proclaimed fastest hands wouldn’t throw any lost eagggsy to green lomo[/QUOTE] Yeah that game plan goes right up their with Canelo's plan of outboxing Floyd. Pillow…

[QUOTE=ShoulderRoll;19752117]So if Gary Russell wants the fight with Santa Cruz why isn't it happening? And is Gary lying about Santa Cruz not wanting it?[/QUOTE] Gary retires after every fight so does that answer your own question.

I agree with Russell. He met his superior in Loma but no one else will step in the ring with him.

[QUOTE=bronx7;19752427]So where is he chasing Lomo to avenge his embarrassing loss where the self proclaimed fastest hands wouldn’t throw any lost easy to green lomo[/QUOTE] Salido made Loma look at least equal. Russell made him look like a genius and…