Ruiz: What I Weighed Doesn't Matter; Wanted To Be Little Heavier

Andy Ruiz Jr. thought he would weigh in six or seven hours earlier Friday than when he and Anthony Joshua actually stepped on the scale in Saudi Arabia.

By the time arrived for their official weigh-in late Friday afternoon, Ruiz already had eaten multiple meals and drank a lot of water. That’s among the reasons the defending IBF/IBO/WBA/WBO champion didn’t bother taking off his sombrero, clothes or sneakers when it was his turn to get on the scale.

Ruiz realizes the fact that it read 283½ pounds has generated considerable doubt about his chances of beating Joshua again Saturday night at Diriyah Arena. The 6-feet-2 Ruiz also feels entirely too much has been made Friday about him coming in 15½ pounds heavier than he officially weighed before he upset Joshua on June 1 at Madison Square Garden in New York.

“Before the weigh-in, I already ate and I already drank so much water,” Ruiz told BoxingScene.com following the weigh-in. “And, you know, I weighed in with all my clothes and a sombrero. But if I would’ve weighed in at the time they told me, I would’ve been the same weight as I weighed [for] June 1st. But we’re still strong and we’re ready. I actually wanted to come in a little bit heavier this time, just to be strong, to feel good and to have that extra pop in me.” 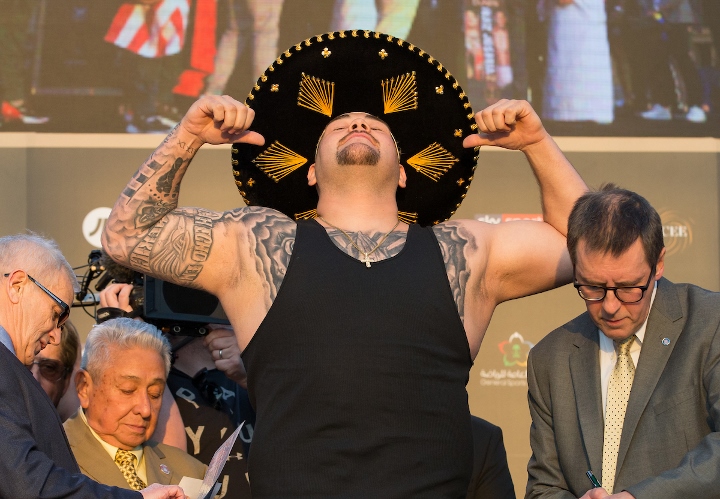 The 30-year-old Ruiz revealed earlier this week that he expected to weigh just about the same for this immediate rematch as he weighed for their first fight (268 pounds). Instead, he came in at his highest weight since he was 292½ pounds for his second professional fight in June 2009.

“I would’ve been at like 267, 268 for [this] fight if I would’ve weighed in when I thought I was gonna weigh in, and without eating all the food that I wanted to eat,” Ruiz said. “I probably even would’ve weighed in a little lighter [than 268 pounds]. But you know, it doesn’t really matter how much I weighed because we know what the game plan is and what [weight] we were really gonna weigh in. I’m still fast, I’m still strong and I wanted to be a little bit more than I was for our first fight, so I could be a little stronger.”

Whereas Ruiz was significantly heavier than he weighed six months ago, Joshua got on the scale 10-plus pounds lighter than he was for their first fight.

The 6-feet-6 Joshua weighed in at 247¾ pounds for their June 1 bout, in which he was knocked down four times and stopped in the seventh round. Joshua weighed 237½ pounds Friday, the lightest he has been since he weighed 236½ pounds for his ninth professional fight in October 2014.

Regardless, Ruiz hopes Joshua, promoter Eddie Hearn and the rest of the former champion’s team are reading too much into his weight gain for their highly anticipated rematch.

“Eddie Hearn was kind of surprised,” Ruiz said. “He was like, ‘Wow!’ But that’s actually kind of good that they’re thinking about how much I really weigh. Because everybody was saying [before Friday] I looked skinnier, I looked leaner and I looked stronger.

“But we want them to think too much [about my weight]. As long as we stick to the game plan, we know what we’ve gotta do. You know, the speed is there, the power’s there and now we just have to execute the game plan.”

Their rematch will be the main event of a DAZN stream scheduled to start at noon ET/9 a.m. PT in the United States. Joshua-Ruiz II also will headline a Sky Sports Box Office pay-per-view show in the United Kingdom (5 p.m. GMT; £24.95 in HD).

[QUOTE=Toffee;20250925]2 X Unified Champ. Top 3 with every credible ratings list. Not top level?[/QUOTE] Throw out the alphabet titles and silly political sanctioning bodies and vast amounts of money from promoters, etc. Just look at the boxing itself. Joshua's last…

Why do fellow fight fans compare what a paid pro does with what a fan does ?!??? Fans, [B]STOP WHITE KNIGHTING THESE MILLIONAIRES[/B]. Even within [B]THE BOXING WORLD[/B], Andy is being slammed. Even Andy says he should have trained ''harder''…

[QUOTE=Timur78;20250910]Yeah, whatever AJ did in the 2nd fight was not boxing and definitely was not fighting. [/QUOTE] Apparently 3 professional boxing judges beg to differ.

[QUOTE=Timur78;20250872]If you want to talk about top level boxing, Joshua should not be in the conversation. [/QUOTE] 2 X Unified Champ. Top 3 with every credible ratings list. Not top level?