Roy Jones Jr, 51-years-old, admits he was surprised with the strength and stamina of Mike Tyson, 54-years-old. (Photo by Joe Scarnici/Getty Images for Triller).

Tyson, a former undisputed heavyweight champion, retired from the sport of boxing in 2005.

He returned to the ring on Saturday night, when he faced Jones in an eight round exhibition at Staples Center in Los Angeles, California. 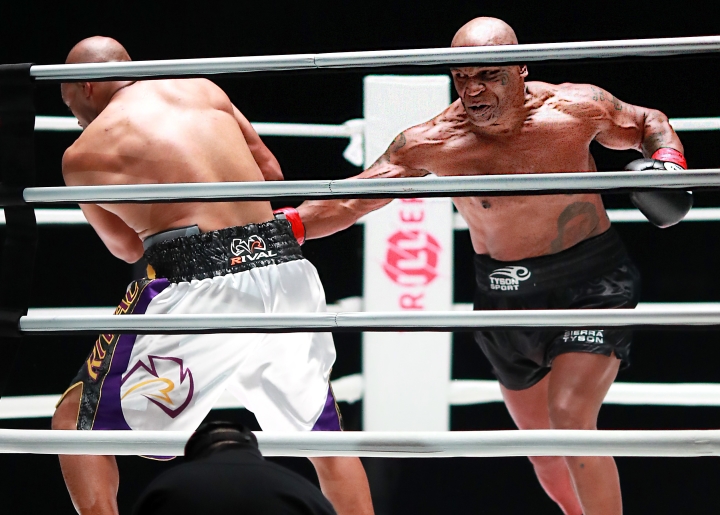 Jones, a former four division champion, last stepped in the ring in early 2018.

There were many who viewed Jones as the boxer with more gas in the tank.

His strategy was to hold Tyson, make him work and tire him out into the later rounds.

But that didn't happen, as Tyson continued to throw heavy punches for most of the fight.

Jones appeared to be completely exhausted by the mid-way point of the contest - due to Tyson's body work.

"It surprised me he could go eight rounds," Jones said. "He could go with anybody. If he connects, you'll have a problem. He can do anything he wants to do."

A three-judge panel scored the bout a split draw. The judges, made up of Christy Martin, Chad Dawson and Vinny Paz, were appointed by the World Boxing Council.

Jones felt that he did enough to win, but the majority of observers felt Tyson was the clear winner of the contest.

"I thought I won the fight, jabbed better and controlled the fight, but I'm cool with a draw," Jones said. "We both made it out cool and everybody got entertained.

"I'm happy to scratch this off my bucket list. Everything hurt when he made contact and it makes you so fatigued. I think I felt the uppercut the most. My jaw still feels it."

If they fought way back after Jones beat Ruiz, I think Tyson would've been too much for Jones. If you remember the first round against Ruiz, Jones was ever so briefly rocked by a punch. A Tyson power punch would've…

Yeah I'm good. Don't think I ever need to see this again or something similar. It really is so meaningless. I mean Okay, in the name of charity, fine, but why not put some head gear on then? What's the…

Mike looks good, but geezer wars / exibition level good. I wouldn't want to see him take any real punishment. Meet and greet and a seat at the masters feet.