PHILADELPHIA – Jeison Rosario and his promoter consider New York City the perfect place for his rematch against Julian Williams.

The Dominican Republic’s Rosario upset Williams by fifth-round technical knockout in Williams’ hometown of Philadelphia on Saturday night to win the IBF, IBO and WBA 154-pound titles. Rosario is contractually obligated to give Williams a rematch, but the site of that second fight isn’t set.

New York has a large Dominican population, thus it’d make sense to bring their rematch there later this year.

“New York City – that is the right place,” Sampson Lewkowicz, Rosario’s promoter, told a group of reporters late Saturday night. “[Rosario] needs to do it [in New York] for [his] Dominican people.” 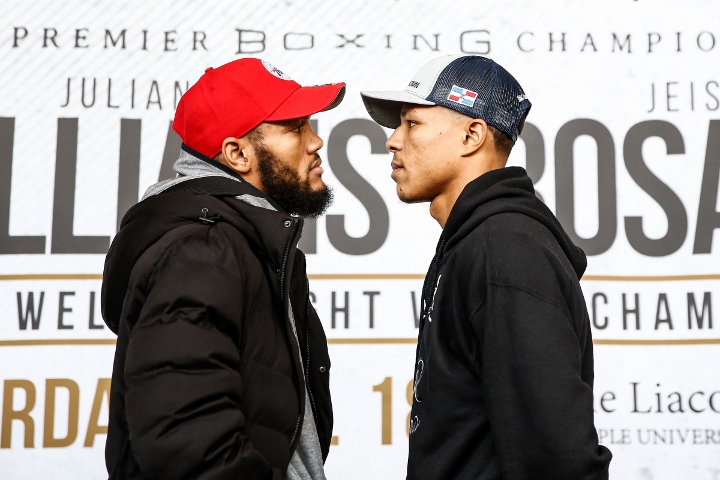 Williams (27-2-1, 16 KOs, 1 NC), who was listed as at least a 30-1 favorite to beat Rosario (20-1-1, 14 KOs), stated after losing that he wants an immediate rematch. The 29-year-old Williams seemingly learned the hard way from Jarrett Hurd passing on the immediate rematch Williams owed him that he shouldn’t allow Rosario to fight someone else first because if Rosario were to lose in his first title defense, Williams would have to work his way back to a shot at winning back his belts.

Regardless, Lewkowicz assured reporters after his fighter’s huge upset that they’ll honor the rematch clause whenever Williams wants his chance to redeem himself.

“I say to the champ, Williams, that any time he want that fight, regardless if it’s the first time, second time, third time that he’s fighting [after Rosario beat him], he’s the boss,” Lewkowicz said. “He will make the decision and we will give him the rematch. [Rosario] will not look for a way out. That is for sure. Many champions, when they win, they want to get a way out. I would not do [that] to a nice person and a good boxer that gave the opportunity to my fighter. So, he deserves the rematch. Any time he want, he’s the boss. He makes the decision.”

“In the Dominican Republic, there’s not the kind of money, a way to make this happen,” Lewkowicz explained. “So, it will never happen.”

I guess it's harder to skim off the top in DR, makes sense..

Apparently these teams can’t see the bizarre fighting at home thing at 154.

Of course it has to be in NYC! Washington Heights Stand Up!