Rosado: Always Static Between Me and Jacobs, The Fight Just Had To Happen!

One of the most appealing parts of boxing for a young athlete is that there isn’t much in the way of a barrier to entry. It’s not like the NBA, NFL or Major League Baseball, where a certain path through college or the minor leagues is necessary to make it to the big show.

In boxing, if a budding pro can get a license and get someone to put them on a show, they’re in.

Gabriel Rosado, Philadelphia tough to the core, had 11 amateur fights before turning pro at the age of 19. He didn’t go through the USA Boxing program, didn’t have hundreds of bouts to learn his craft. He took his 11 fights and walked into a sport full of sharks, where folks in the ring try to take your heart while those outside the ropes try to take your money.

“A lot of my fights, I just learned as I went as a pro,” recalled Rosado. “It was difficult.”

He lost a few early on but won more, and while he didn’t get any gifts in fighting opposition like unbeaten prospects Fernando Guerrero and James Moore, he was learning, and by his 15th pro fight in 2009, he was in his first 10-rounder…against former world champion Kassim Ouma, just four fights removed from facing Jermain Taylor for the middleweight title.

“It was one of those things where it makes you or breaks you,” Rosado said of his fistic upbringing. “I didn't let it affect me. Obviously a loss in boxing is a major setback because you don't get to fight the next day - it's not like the NBA, where you take a loss and you can redeem yourself the next day. It took patience and that factor of believing that I would one day fight at a world-class level. That's what it was. It was being persistent.”

Rosado would beat Ouma that night in Newark, New Jersey, and there was no turning back for the Philadelphian, who, outside of a couple of what he calls “build-up fights,” was in with killers almost every night. Again, he won more than he lost, lost some many felt he deserved to win, but always, always, he showed up to fight. From Gennadiy Golovkin and Jermell Charlo to Peter Quillin and David Lemieux, Rosado wasn’t ducking anyone.

The fans appreciated that effort, wondering where he would be if his skin held up or his defense was more than an afterthought on fight night. There were world title shots against Golovkin and Quillin, but he came up short, with most believing that might always be the case for a fighter who was good enough to compete at that level, but just couldn’t get to that next one.

In the meantime, Rosado went about his business in and out of the ring. He fought, but he also modeled, acted and launched his own gym in his adopted hometown of Los Angeles. He wasn’t going to be a cautionary tale after he hung up the gloves, proving that as he learned about the fighting part of the pro game on the job, he did the same when it came to the business end of the sweet science.

“I think it's important for a fighter to educate himself, obviously, and know what's what,” said Rosado. “But, at the same time, you've got to have a team as well that you can trust that can handle some things. You don't want to go into a fight and be managing the whole situation and be thinking about things you don't need to think about when you'd rather just be training and preparing for the fight. So I do put people in position to handle some of the contract so I can just focus on the fight, but I do educate myself on the numbers, and I know what I want. So it is important for fighters to educate themselves as far as business, and not just that, but educate themselves on what to do when they make the money. I think a lot of fighters make a lot of money and then they don't have a strategy on how to spend it and then they go broke. So more important is to have a gameplan on what to do with your money when you get it.” 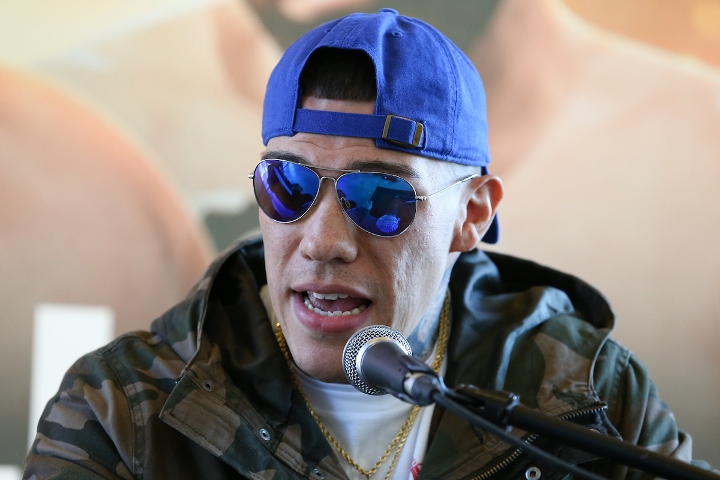 On January 13, Rosado will celebrate the 15th anniversary of his first pro fight against Phil Hicklin. The day after, he will turn 35 years old. In between now and then, he hopes to have shocked the boxing world and put himself in position for a third title shot by beating Daniel Jacobs in a November 27 main event that some thought would never happen.

Rosado wasn’t in that group.

“I knew this fight was gonna happen,” he said. “It was supposed to happen back in June, right after the fights in Arizona, but then the pandemic hit and kinda slowed things down. But it's a fight that I think was gonna happen just because whenever me and Danny ran into each other, there was really no beef that we were gonna fight in the middle of the street or anything, but there was always a conversation. And it was never a pleasant conversation. It was always that static where it just had to happen.”

A lot of that static was captured on camera in a YouTube video released by Matchroom Boxing late last year. Brought in as a backup in case Julio Cesar Chavez Jr. found his way out of his December 20 bout with Jacobs, Rosado – who wound up fighting and beating Humberto Ochoa on the card where Jacobs halted Chavez Jr. – got into it on weigh-in day with the Brooklynite, setting the stage for what ultimately will be a fight, one boxing fans haven’t exactly embraced given where the two combatants are seen to be at in their careers.

“The thing is, with a fight like Jacobs, it's funny because boxing fans are interesting,” said Rosado with a chuckle. “They're really extreme; they either love it or they hate it. They're never in the middle. So with this kind of fight, you got a lot of talk where they either love the fight or they hate the fight. But usually those are the kind of fights that people are gonna tune in and watch, regardless, so once you get people talking, they want to watch. I think the fight with me and Danny is a great fight.”

It may turn out that way, or it could be a nail in the coffin of Rosado’s dreams of getting another title shot and winning the belt. But the odds have never been a concern to this Philly fighter, who knows what’s at stake later this month and has acted accordingly. And with Freddie Roach on board, Rosado believes he has given himself every opportunity to get things right in Hollywood, Florida.

“I think at this point in my career, I just want to get over that hump,” he said. “I've had a couple pretty big fights where they were close fights or controversial fights, but I think it was just a matter of putting myself in position where my team is solid and it gives me that edge. And I think being at Wild Card and training there with Freddie and his staff is as professional as it gets. It's straight down to business, and I think that it a big factor going into this kind of fight - really having a team that's totally locked in and knows what it takes to fight at this level.”

Even at 34, Rosado is still learning. Maybe that’s why he sticks around in a sport he really doesn’t need anymore.

“I choose boxing because it's an addiction,” he said. “I always say it's who you are. You can't tell a pianist when he's 50 or 60 years old that he can't play the piano anymore. It's in his DNA, it's who he is. Obviously with a fighter, Father Time tells us when it's our time (Laughs), but once a fighter, always a fighter. And for me, it's just wanting to get a title, and once I get a world title, I'm satisfied. That's the final goal right there, to win a world title and I can just retire.”

He never beats anyone. Ever. He isnt really even competetive. I know it takes a lot of guts to get in there and risk injury, but there are a lot of other guys that deserve the paydays he must get.…

Rosado has been in too many wars. This is why you can’t have a career of come forward fighting. He looked promising in the beginning.

[QUOTE=millcitymauler;20877672]Its kind of surprising that in this day and age, with so many belts floating around, Gabe never picked up a belt. It does however illustrate how tough a resume the guy has compiled. Would love to see him somehow…

Say what you want about Rosado, but with all of the top level guys he's faced, not a single one of them has every KO'd the man. He took GGG's best when GGG was taking heads off shoulders. I think…

Rosado was only ever a gatekeeper in his prime and that was a long time ago. This is a dreadful fight