Junior featherweight contender Ronny Rios believes he is proof that early setbacks do not define a career.

Rios is positioning himself for a world title opportunity, but is dialed on WBA ‘regular’ titleholder Brandon Figueroa.

The WBA in early March ordered negotiations to take place between Golden Boy Promotions, which promotes Rios, and Premier Boxing Champions, who represents Figueroa. Rios stated he is the mandatory challenger to face the unbeaten Figueroa (20-0-1, 15 knockouts). 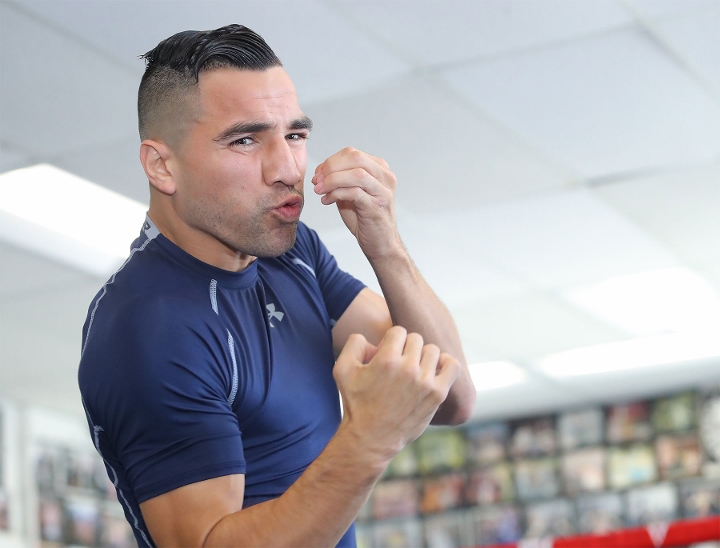 Figueroa won the WBA ‘interim’ title on April 20 of last year, stopping Yonfrez Parejo after the eighth round in Carson, California. He defended the title on August 24, knocking out Javier Chacon on August 24 in Edinburg, Texas, not far from his home in Weslaco.

In his last bout on November 23, Figueroa, who was elevated to ‘regular’ titleholder status, fought to a split-decision draw against Mexico’s Julio Ceja in Las Vegas, Nevada.

According to the WBA’s C.11 championship rule, ‘the champion must face the mandatory challenger within nine months after winning the title, with the timeframe ending on January 19.

“Because of what the WBA ordered, we started camp and thought we would fight in May or June,” Rios told BoxingScene.com over the phone on Thursday afternoon.

At the recent WBA Convention, which was held online, Golden Boy Promotions matchmaker Robert Diaz petitioned the WBA to order a fight between Rios and Figueroa, stating that both fighters reside in the United States. Rios (32-3, 16 KOs) lives in the Los Angeles suburb of Santa Ana.

Tom Brown, who runs TGB Promotions and is aligned to PBC, reportedly stated today that he is petitioning the WBA for Figueroa to face a different fighter, one who Rios called a ‘tune-up bout.’

There is a mandate in the WBA championship committee rules (C.13 Rules) which states that the champion cannot face a different opponent from the mandatory challenger within the 60 days after finishing the deadline, which ended earlier this year.

“They want a special tune-up request and I don’t,” said Rios, who knocked out Hugo Berrio in his last bout on November 9. “I’m ready to fight for a championship now.”

Rios has excelled as of late, winning his last three fights since losing by knockout to Azat Hovhannisyan in March 2018. The 30-year-old challenged WBC junior featherweight titleholder Rey Vargas in August 2017, losing by unanimous decision.

After the two defeats Rios went through, he thought about permanently hanging up the gloves, but decided to give boxing one more try thanks to his son.

“After the loss to Vargas, I felt like I was forced to go back to the ring, where I needed some time off to more to reflect and recharge. After the loss to Azat, I said to myself I was done with the sport. But then I told myself I didn’t want to go out like that. I wanted to leave a legacy for my son. I wanted him to see me win a world championship. I don’t want to fight guys I know I can beat. I want to fight Brandon Figueroa for that title.”

“Those two losses left my heart broken. It’s true that nothing heals but time. I picked myself up and I came back. I really don’t want to get in that ring unless I know it’s against Brandon Figueroa.”

Amongst Rios’ recent victories was a knockout win over contender Diego De La Hoya, who entered the fight unbeaten, on July 13. Rios believes a victory over Figueroa, should they fight, would also benefit younger brother and unbeaten welterweight Alexis Rocha.

“Alexis is making his own path in boxing. A fight and win over Figueroa would left his spirits up and inspire him as well. I actually want to show anybody that you could overcome setbacks and bounce back. Look at me.”

“I also want the WBA to know that I have represented then with honor and integrity and that I have overcome setbacks to get to where I’m at now.”