Romero: They're Terrified Of Me; That's Why Top Lightweights Never Mention Me

Amid all the trash talk exchanged on Instagram, Twitter and other social media platforms, it hasn’t been difficult during recent months to find evidence of unbeaten lightweights Gervonta Davis, Ryan Garcia, Devin Haney and Teofimo Lopez degrading each other. Romero, who considers Lopez a friend, noticed none of them mentioned him.

The unbeaten Romero has only 11 professional fights and has not yet been exposed even to hardcore boxing fans the way those fighters have been showcased. Unlike Davis (WBA), Haney (WBC) and Lopez (IBF), he doesn’t own a lightweight title, either.

Those aren’t the reasons, according to the Las Vegas native, that his contemporaries aren’t calling him out.

The 24-year-old Romero, who is promoted by Floyd Mayweather’s company, contends that sparring sessions with all of the aforementioned fighters other than Davis have given them reasons to avoid fighting him.

Romero’s supreme confidence comes mostly from his superior power, which has led to him knocking out all but one of his pro opponents since he debuted in December 2016. The former judo standout suspects he has been blessed yet cursed by being so heavy-handed. 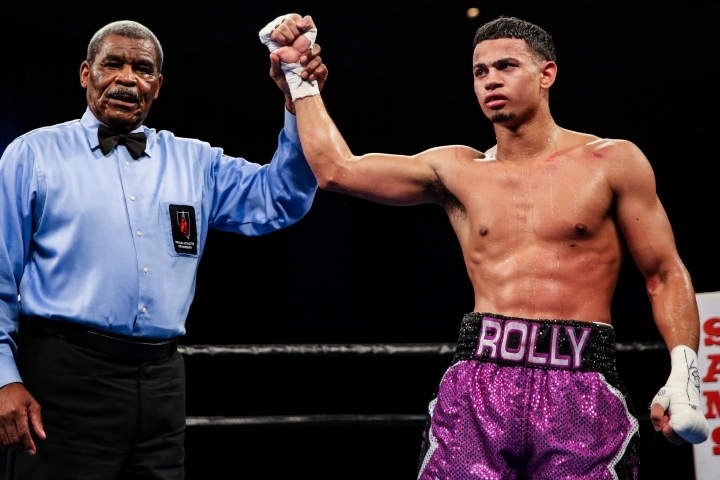 Romero, more known by the nickname “Rolly,” feels his vaunted power is why he doesn’t have more fights overall and hasn’t faced more prominent opponents 3½ years into his pro career.

The winner will become one of four WBA 135-pound champions.

Nevertheless, Romero considers this an important moment in his development.

The son of an accomplished amateur boxer from Cuba, Romero had just 35 amateur fights after turning to boxing at the late age of 16. This will be just his 47th boxing match overall.

He predicted an early, brutal knockout of the Dominican Republic’s Marinez (19-0, 7 KOs), an unknown, unproven contender who is trained by Robert Garcia.

Romero has boxed beyond the fourth round only once, when he shut out Javier Martinez (4-7, 3 KOs) in a six-rounder in August 2018. In his most recent appearance, Romero knocked out Arturs Ahmetovs (5-1, 2 KOs) in the second round on the Tyson Fury-Deontay Wilder undercard February 22.

Martinez and Ahmetovs obviously will never be confused for Garcia and Haney, but Romero promises even boxing’s elite lightweights won’t be able to take his power.

Capturing even an interim title at least would afford Romero more leverage than he has today. He senses, however, that the top lightweights won’t fight him anytime soon.

“None of ‘em mention me,” Romero said. “I don’t get mentioned by anybody, but I have just as much clout. I have more clout than half of them. I mean, other than the exceptions – Ryan Garcia having six [million Instagram followers], ‘Tank’ having two [million Instagram followers] and stuff like that. Me and Teofimo have about the same. But Teofimo, he a friend of mine.

“But aside from that, everybody under me, nobody calls me out either way. Nobody above me calls me out, none of ‘em. I call them out. I literally can say whatever I want. They don’t do anything, because they know if they do anything, it’s gonna end up like, ‘OK, send me the damn contract. I’m waiting. Send me the damn contract.’ And they know I’ll take it because I don’t say no to anybody. I’ll fight anybody.”

Mayweather made Garcia a very public offer to fight Romero during a TMZ interview in February 2019. Garcia wasn’t interested in what he viewed as an unnecessary risk at that point in his career.

“He was making 30K a fight and got offered a 200K bonus on top of beating me, and a guaranteed title shot [at Davis],” Romero recalled. “That sounds like a golden opportunity, no?”

Romero, meanwhile, is focused on scoring his own impressive knockout Saturday night.

“People are gonna see what I can do on August 15th,” Romero said. “I’m gonna just prove my hype. That’s all. I’ll prove it.”

Who has been feeding lies to this Ricky Romero? They are going to fuuuuk up his career. Kid is ****y as $hiit, but doesn’t know how to fight! He should not be in the list of 20 contenders to any…

[QUOTE=Eff Pandas;20705959]Yea I'm a fan of Rollie & gotten to see him fight live here in Vegas a couple times & I do think he gots potential, but the story with sparring is he gets a lil rough & reckless…

He is a underdog but I wish him luck

[QUOTE=theface07;20705288]WTF are you talking about? What has he backed up? He hasn't beat anyone even close to being contender status, let alone legitimate title holders. Even Ryan Garcia, with all his talk about getting paid more from social media than…

[QUOTE=Eff Pandas;20706361]I disagree completely Floyd/Leonard matches guys softly. There is no US promotion that gets their guys 0 taken early more than Mayweather Promotions boxers. Granted that's not been the case with Rollie up til now, but largely MP boxers…