Romero: Knockout Of Marinez Will Be Very Brutal; One Of Worst Ever Seen In Sport

Rolando Romero promised something similar will happen Saturday night to what occurred the last time he fought a Dominican opponent with more experience than him.

“It’s gonna be a very brutal knockout, one of the worst knockouts ever seen in this sport,” Romero told BoxingScene.com regarding his 12-round fight against unbeaten Jackson Marinez for the WBA interim lightweight title. “He’s 19-0. I’m 11-0. So, theoretically, he’s a better fighter than me, no? But like I said, they could put in whoever they want with me – I’m gonna perform.”

Las Vegas’ Romero, a top prospect promoted by Floyd Mayweather’s company, knows he’ll have to beat better opponents and harder punchers than Marinez to prove himself as an elite lightweight. This fight still represents an incremental step in his development, an opportunity that the 24-year-old Romero is fully confident he’ll exploit. 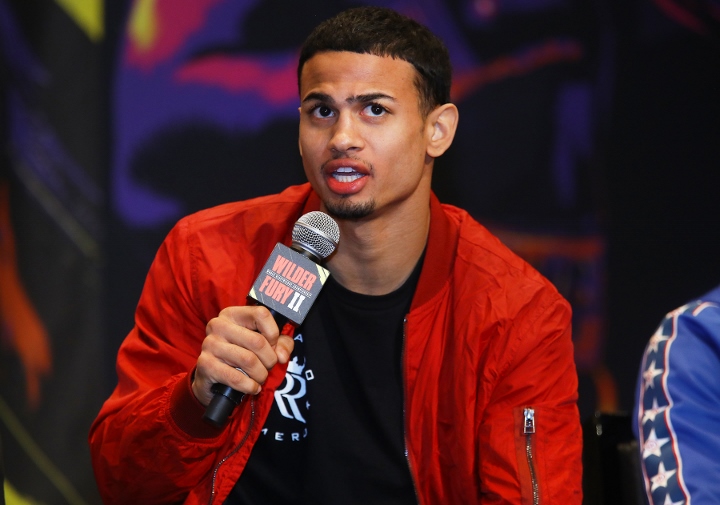 Showtime will televise the bout between Romero (11-0, 10 KOs) and Marinez (19-0, 7 KOs) as part of a tripleheader from Mohegan Sun Arena in Uncasville, Connecticut.

The hard-hitting Romero, who has knocked out six straight opponents, is certain Marinez won’t last long Saturday night, either.

[QUOTE=KING5TWENTY;20704337]Rolly is one of the more confident young fighters I've seen out of this new generation. Been like that since I seen him when hes was 4-0[/QUOTE] Big deal. That proves nothing, absolutely nothing. Most fighters are confident. You need…

[QUOTE=RomanReigns;20704246]One of the most arrogant boxers in the World. I hope he fights Ryan Garcia after he KO's Luke Campbell.[/QUOTE] I totally agree about Rolly but slim chance of Garcia KO'ing Campbell. If he KOs Campbell, I'll be impressed. Loma…

[QUOTE=KING5TWENTY;20704337]Rolly is one of the more confident young fighters I've seen out of this new generation. Been like that since I seen him when hes was 4-0[/QUOTE]I like him too. He had it rough growing up. He came from a…

[QUOTE=RomanReigns;20704246]One of the most arrogant boxers in the World. I hope he fights Ryan Garcia after he KO's Luke Campbell.[/QUOTE]i hope they fight too. There's bad blood between them. Should be a good fight while it last.

[QUOTE=RomanReigns;20704251]Garcia was getting the best of him in their sparring. Romeron is a loud mouth who had some tantrums after their sparring.[/QUOTE]I think you are wrong. It was the other way around. Watch it again and you can see the…