Rolando Romero got the win by unanimous decision. Jackson Marinez had a 103-86 edge in punches landed, throwing an average of 52 per round to
42 for Romero. 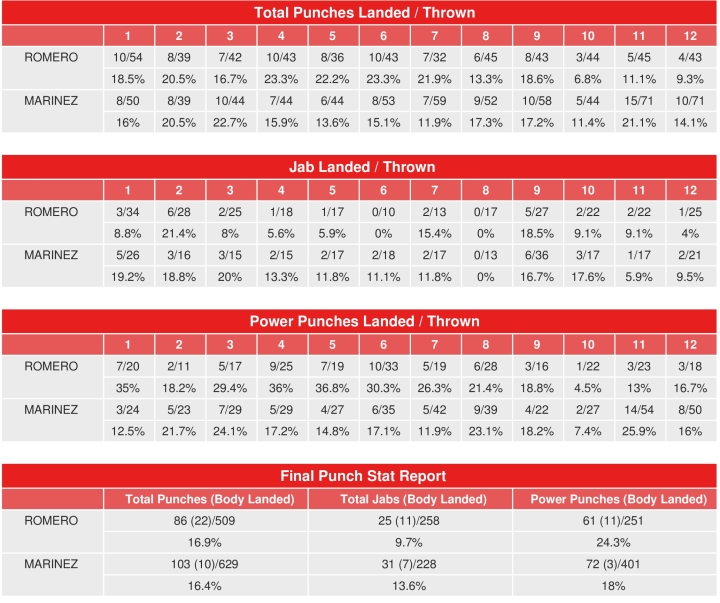 Very close first round, with Romero punching hard and Marinez doing his boxing. More of the same in the second, with Marinez boxing and Romero rushing in with big shots. Marinez continued to give Romero fits with his boxing ability.

Marinez's jab, counter-punching and control of the distance was giving Romero fits in the third and fourth. The fifth was close and could have gone either way.  The sixth was another close round with the power of Marinez against Romero's power. Marinez had the edge in the seventh with his boxing.

Marinez stood his ground more in the eight, as he was outboxing Romero. There was a clash of heads in the ninth to open up a cut on Romero's left eye. More of Marinez outboxing Romero during the tenth. In the eleventh, Romero was pushing the pace and there was a sense of urgency to do something big as Marinez continued to box.

In the twelfth, they started off trading punches, with close action that saw moments of success for both.

This was a ROBBERY no matter how the fight is watched.Mariñez won AT LEAST 9 rounds & that is being very generous to Romero who by NO WAY deserved to win.

Too many conspiracy theories in boxing.

My old man used to hate judges and fights going to decision. He said he'd rather knock or get knocked inside the ring than go to the judges.. He'd say to me.. "If there's one thing to Remember when entering…