Glenn Feldman (116-112), Frank Lombardi (118-110) and Don Trella (115-113) scored their 12-round fight for Romero, who won their 135-pound title bout by unanimous decision at Mohegan Sun Arena in Uncasville, Connecticut. The Dominican Republic’s Marinez mostly out-boxed the brash knockout artist and out-landed the rugged Romero, according to Showtime’s unofficial punch stats.

Feldman still scored eight rounds for Romero (12-0, 10 KOs), who somehow won 10 rounds on Lombardi’s card. Trella scored seven rounds for Romero, who is promoted by Floyd Mayweather’s company and entered the fight as a 5-1 favorite. 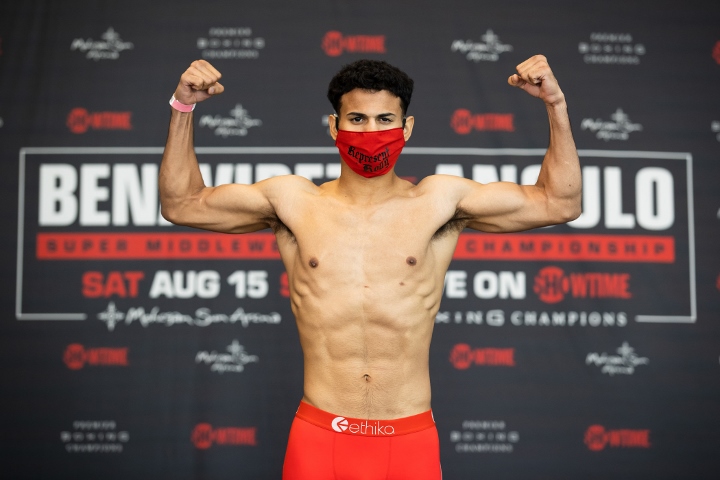 The supremely confident Romero had predicted he’d brutally knock out Marinez early. Marinez took Romero’s power well when Romero landed, but he made Romero miss with many of his punches.

Nevertheless, the 24-year-old Romero won the WBA’s interim lightweight title, one of that sanctioning organization’s four championships within the 135-pound division.

The Dominican Republic’s Marinez, who was considered a step up in competition for Romero, suffered his first professional defeat (19-1, 7 KOs).

Romero boxed beyond the sixth round for the first time since making his pro debut in December 2016. He hadn’t been scheduled for more than eight rounds before agreeing to meet Marinez in this 12-rounder.

Marinez took Romero’s right hand and kept coming about 1:15 into the 12th round. Marinez remained in control for the remainder of that final round.

A right hand by Marinez landed flush with just over 10 seconds to go in the 11th round. He continued to out-box the methodical Romero in that round

Marinez’s right hand landed about 1:10 into the 10th round as Romero attempted to work his way inside.

Marinez slipped several of Romero’s power shots in the eighth round, kept on his toes and out-boxed his rugged opponent in those three minutes. Romero landed two hard body shots with just over 30 seconds to go in the eighth round.

Romero landed a right to the body, but Marinez quickly fired back with a right up top in the final minute of the seventh round. Dock warned Romero again earlier in the seventh round for using his forearm on Marinez’s neck while Marinez was backed against the ropes.

A stiff jab by Romero made Marinez back up with about 40 seconds left in the sixth round. Romero’s overhand right connected several seconds later.

Marinez made Romero miss for most of the fourth round. With about 20 seconds to go in that round, Romero backed Marinez into the ropes and tried to rough him up, which drew a warning from Dock.

Romero landed a right hand just as the bell sounded to end the fourth round.

Marinez established distance by consistently pumping his jab and defended himself well for much of the third round. Romero missed most of his power shots in that round.

Marinez landed a short, right hand as Romero came in with his head down about 1:05 into the second round. Marinez used his jab to keep Romero from getting inside for much of the second round and slipped several of Romero’s power shots.

[QUOTE=Outwest Exp 355;20709948]I just can’t go there. I’m sure there’s some kind of corruption in boxing with the governing bodies and what not.[/QUOTE] I agree with you there Pretty damn sure there’s all kinds of corruption going on

[QUOTE=MulaKO;20709934]Not if the chit hits the fan They’d probably turn over on their mothers lol[/QUOTE] I just can’t go there. I’m sure there’s some kind of corruption in boxing with the governing bodies and what not.

[QUOTE=Outwest Exp 355;20709590]It’s happened several times before in much bigger fights than this. If promoters were really out there paying off judges it wouldn’t be that hard to prove it. All the feds have to do is look at these…

[QUOTE=PBR Streetgang;20709774]I will echo everyone else and say it was a terrible decision. Rolly was completely outboxed and outclassed. Kid had no plan B once it was apparent his power wasn't going to bail him out. Terrible attitude from him…