The rugged Puerto Rican knocked out defending champion Claudio Marrero in the seventh round to win the interim WBA featherweight title at MGM Grand’s Marquee Ballroom. Puerto Rico’s Rojas (26-1-2, 19 KOs) landed a three-punch combination and floored the game Marrero with a right hand.

The Dominican Republic’s Marrero (22-2, 16 KOs) was disoriented and the southpaw couldn’t get up before referee Russell Mora Jr. reached the count of 10. The fight was stopped at 2:59 of the seventh round, with just one second left in it. 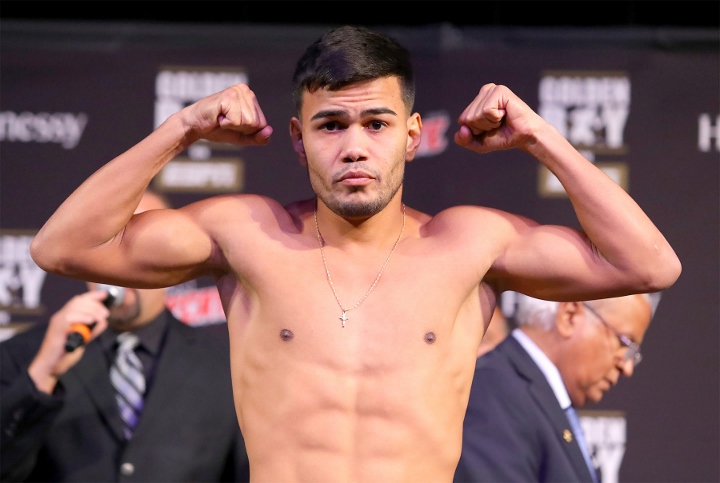 It marked the second time in four months Rojas beat a favored fighter the night before a Canelo Alvarez pay-per-view fight in Las Vegas.

The night before Alvarez dominated Julio Cesar Chavez Jr. on May 6 at T-Mobile Arena, Rojas battered previously unbeaten Abraham Lopez (22-1-1, 15 KOs) to win by technical knockout at MGM Grand Garden Arena. Rojas knocked down Lopez three times before their scheduled 10-round fight was stopped in the eighth.

Marrero-Rojas was the main event of a five-bout card and was broadcast by ESPN2 as part of the “Golden Boy On ESPN” series.

The Rojas-Marrero match was highly competitive prior to Rojas abruptly ending the bout with the aforementioned right hand. Earlier in the seventh round, Rojas landed a solid right uppercut that Marrero took well.

Marrero started the sixth round against the ropes, where he had difficulty dealing with Rojas in each of the previous three rounds. Rojas connected with several hard right hands as the sixth round progressed, but Marrero wasn’t fazed and demonstratively motioned to Rojas to keep coming.

The relentless Rojas opened up on Marrero early in the fifth round and landed a hard right hand. Marrero managed to fire back, though, and temporarily kept Rojas from coming forward.

They spent the second half of a highly entertaining fifth round blasting one another with power shots from close distances.

Rojas started catching up with Marrero toward the end of the third round, when he trapped Marrero in a neutral corner.

Marrero continued to fight at a blistering pace in the second round and connected with numerous combinations. The defending champion didn’t seem to hurt Rojas at all, but began building a lead on the scorecards.

Marrero landed several crisp combinations on Rojas in the first round. Rojas mostly tried to cover up in those three minutes, as Marrero let his hands go.

[QUOTE=illpapi;18051079]If Marrero actually bit Rojas then he deserved to get what he got. That would be unreal. I'm completely disappointed. I expected so much more from him. I am still a little shocked.[/QUOTE] [QUOTE=richardt;18051122]Now I'm hearing he tried to bite…

Imagine this fight happened on the undercard of Canelo-GGG? Damn. Another missed opportunity for boxing to shine with millions of paid viewers watching.

Rojas reminds me of Maidana but Rojas throws more concise punches and seems like a better version of him. This guy belongs on high profile TV from now on! Featherweight division is really stacked now!

[QUOTE=illpapi;18051079]If Marrero actually bit Rojas then he deserved to get what he got. That would be unreal. I'm completely disappointed. I expected so much more from him. I am still a little shocked.[/QUOTE] I no doubt believe it. It was…