With the victory, Gutierrez, who resides in Maracaibo, Venezuela, has won his last five bouts since losing by knockout to Oscar Duarte on Sept. 29 of last year. His most notable victory as of late occurred on July 13, when he knocked out previously-unbeaten junior lightweight Eduardo 'Rocky' Hernandez in the opening round. 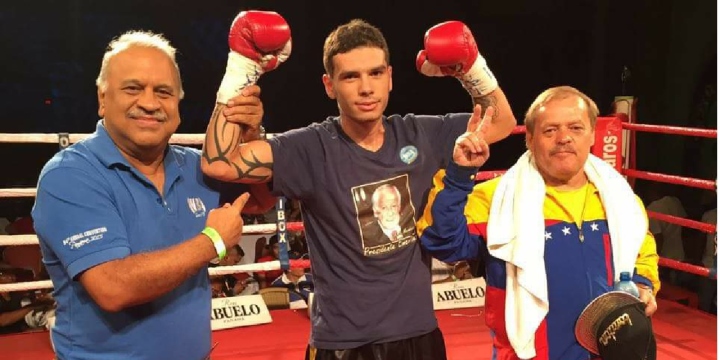 The taller Gutierrez was the more-effective fighter throughout much of the fight, beating Tapia to the punch. Tapia did have his moments, catching Gutierrez with counter right hands to the head.

Gutierrez continued to rain punches down onto Tapia in the second half of the fight, mixing his attack with an occasional hook to the body.

In round seven, Gutierrez scored the only knockdown of the fight, dropping Tapia to the canvas with a straight right hand to the head. Tapia was not visibly hurt from the knockdown, beating the count and continuing to fight on.

Despite being down on the scorecards, Tapia continued to fight on, even as his back was against the ropes. Tapia did connect with occasional right hands to the head, but Gutierrez was the more-effective fighter until the final bell sounded.

"It was a difficult fight against a Mexican, who are the best fighters in the world," said Gutierrez after the fight.

Gutierrez's other losses were to current-WBA junior lightweight titleholder Rene Alvarado in July of 2017 and to unbeaten Hector Tanajara on June 23 of last year.

Lightweight William Zepeda overcame a knockdown in the opening round to stop Jumpier Osses in the third round at the Auditorio del Estado in Mexicali, Mexico.

A counter left cross within the first 20 seconds of the fight dropped Osses to the canvas. Later in the round, a barrage of punches dropped Zepeda to the canvas. Zepeda did not look hurt as he beat the count and fought on.

As the bout progressed, Zepeda continued to beat Osses down, mixing his attack to the head and body, forcing him to fight defensively.

Early in round three, Zepeda dropped Osses to the canvas, prompting an immediate stoppage at 32 seconds.

Lopez, who resides in Mexicali, has won his last three bouts since losing by unanimous decision to unbeaten prospect Ruben Villa on May 10.

Baez had a four-inch height advantage, dwarfing Lopez as he pressed the action from the opening bell. He clipped Lopez with a left uppercut to the head in the opening round.

Lopez chose to stand and trade with Baez in the center of the ring, timing him with lefts and rights to the head. About a minute into round five, a left hook to the head dropped Baez to the canvas. Baez beat the count, but immediately went down again by a barrage of punches. Baez got up a second time and tried to fight back, but was dropped again, prompting a stoppage at 1:28.