Helenius had taken a lot of flush punches and appeared exhausted before he drilled Brooklyn’s Kownacki with a right and then a left that sent Kownacki to the canvas 30 seconds into the fourth round of their scheduled 12-round WBA heavyweight elimination match. A staggered Kownacki got up, but he was disoriented and Helenius jumped on the heavily favored fighter.

With Helenius unloading unanswered punches on a defenseless Kownacki, referee David Fields stepped in and stopped their FOX main event 1:08 into the fourth round. Kownacki was still on his feet when the fight was stopped.

Helenius trailed on all three scorecards when he came back to knock out Kownacki.

It didn’t matter once a resilient Helenius hurt him in the fourth round.

“I knew that I hit him hard and I knew I just had to continue,” Helenius told FOX’s Heidi Androl in the ring following his upset victory. “I knew he was still hurt after that punch.

“He just kept coming and coming. He’s a good fighter – I have to give it to him. My strength is to punch back when people come at me. It was a good fight and a tremendous opportunity for me to be here.” 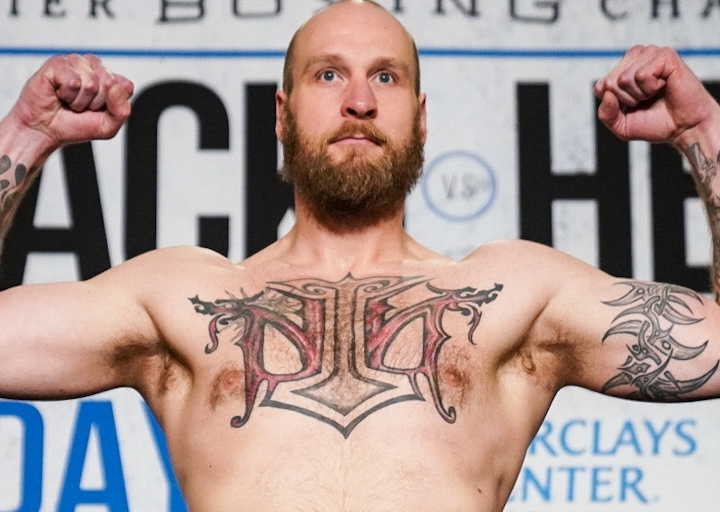 Kownacki, whose face-first defensive strategy left him wide open for Helenius’ hard shots, still seemed well on his way to a knockout victory before the fourth round.

Helenius hit him with a left-right combination that seemed to cause a knockdown 20 seconds into the fourth round, though. Fields didn’t count that as a knockdown, but Kownacki couldn’t remain on his feet much longer.

A right hand and then a short, left inside by Helenius sent Kownacki flat on his back with 2:30 to go in the fourth round. Kownacki quickly got up again and bravely tried to fight out of the trouble, but Helenius finished him.

“It wasn’t my night,” Kownacki said. “It’s a tough sport, and things just didn’t go my way tonight. It was a learning experience and I’m gonna go back to the drawing board and get back to work.”

Things went well for Kownacki before the fateful fourth round.

Two right hands by Kownacki backed Helenius into the ropes about 1:15 into the third round. Helenius tried to hold and move, but he couldn’t keep Kownacki from moving forward and throwing hard shots at his head.

Helenius landed a right hand about 30 seconds into the second round. Helenius then drilled Kownacki with several right hands that temporarily stopped Kownacki from coming forward.

Kownacki didn’t seem hurt from those shots and eventually landed hard shots of his own on Helenius, who appeared exhausted by the end of an entertaining, albeit sloppy second round.

Kownacki went after Helenius as soon as their fight started. He threw a right hand that backed Helenius into the ropes, but Helenius wasn’t hurt.

Helenius took an overhand right from Kownacki with about 1:15 to go in the opening round. Helenius, who fought off his back foot for much of the first three minutes, landed a thudding right to Kownacki’s body just before the first round ended.

Less than three rounds later, Helenius rejuvenated a career that appeared nearly over after an eighth-round knockout defeat to Gerald Washington on July 13 in Minneapolis. Kownacki annihilated Washington (20-4-1, 13 KOs) by second-round TKO in his Washington’s previous bout, which was among the reasons Kownacki was such a huge favorite entering their fight Saturday night.

Before Washington knocked him out, Helenius had been knocked out by France’s Johann Duhaupas in the sixth round of their April 2016 bout in Helsinki.

Kownacki, meanwhile, had shown a reliable chin before getting stopped Saturday night, despite almost always coming forward face-first, even against such hard punchers as Charles Martin (28-2-1, 25 KOs) and Chris Arreola (38-6-1, 33 KOs, 1 NC). He also had walked through Helenius’ hardest shots until the fourth round.

“He hit me with a good shot,” Kownacki said. “I knew what was going on, but I’m just upset with myself. It is what it is.”