Robert Guerrero Wants To Reinvent Himself in The Ring

After returning from retirement, former featherweight, super featherweight and three-time champion Robert Guerrero wants to reinvent himself at the age of 36.

Guerrero (35-6-1, 20 KOs) made a name for himself for mixing it up at a feverish pace “Mexican Style” with wins against Andre Berto, Joel Casamayor, Yoshihiro Kamegai, Selcuk Aydin and Michael Katsidis.

Now, heading into his third fight after a brief hiatus from the sport, the former Floyd Mayweather foe wants to go back to the basics and live up to his moniker of being “The Ghost.”

“There’s still a lot for me to prove in my career. I hung the gloves up too early. I didn’t really think about it too much. I just made a decision and walked away,” Guerrero told BoxingScene.com. “For a minute, I was throwing everything out of the window and just saying, ‘let’s go. Let’s bang it out.’”

“I wouldn’t use my head in the fights that I lost. I would start off great, boxing, and then just lose it in the ring. You get older and realize you can’t do that anymore. You have to stay smart, use your skills.” 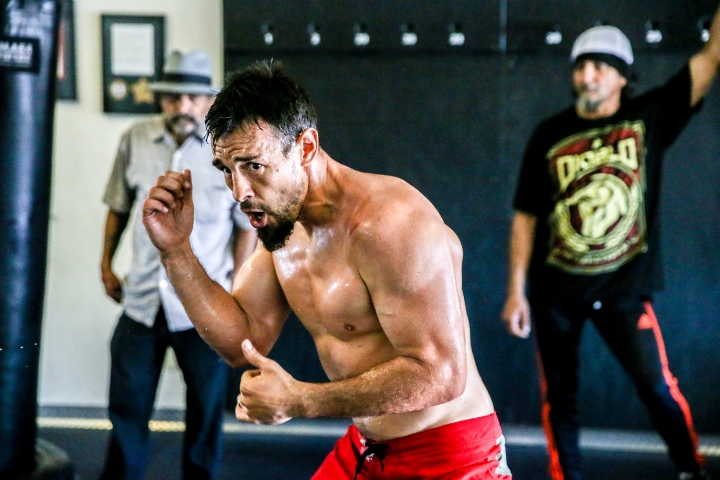 Guerrero said his problem was that he would get bored and want to get in a dog fight to make it exciting and feel that he was in a real fight. From 2013 to 2017, he lost four out of six fights to the likes of Mayweater, Danny Garcia, Keith Thurman and Omar Figueroa Jr., and then walked away.

His blueprint now is to stay on the outside, use footwork and work behind the jab, he said.

“As I reflected and analyzed the big picture, I feel like I can make another run,” he said. “My goal is to win another championship. I know I can be in that mix, and I’m working my way back up there. I’ve been there and done it.”

Guerrero will be taking on Jerry Thomas in a 10-round fight on the undercard of the Errol Spence Jr.-Shawn Porter FOX pay per view Sept. 28 with hopes of getting another crack at a title.

In addition to giving punches, Guerrero is also give back.

He will donate a portion of his purse to the victims of the Gilroy Garlic Festival, a mass shooting on July 28 in his hometown that resulted in four deaths, including the gunman, and over a dozen other injuries.

The shooting happened a block away from his father and trainer Ruben Guerrero’s house. Guerrero’s brother, two nieces and nephew were at the festival as well and were fortunate to escape harm.

“It’s haunting to realize that something like that can happen in your own community,” said Guerrero.

“I’m proud to be from Gilroy and represent. I want to give back because they’ve given me so much in my career by being by my side. They’ve been with me since the beginning, and I have to show love back to them. It’s brought us all together.”

no guerrero, please don't come back. The only reason I want him to come back is so we can see Ruben Guerrero again, I mean come on who doens't like his antics. "He ran like a chicken!"

[QUOTE=JcLazyX210;20004897]I think he's sick of his wife or just bored. The whole thing sounds wrong.[/QUOTE] Yeah bro, his focus should be on other things.

He's been s[COLOR="Black"]hi[/COLOR]t ever since he's started doing crossfit. He also needs to get a new trainer.

[QUOTE=Fire4231;20002401]Robert needs to live up to his nick name. He looked really bad in his final outings it may be time to stay retired. The killers at 147 and 154 would seriously hurt him. The brother has kids and a…

[QUOTE=Beercules;20003146]No. He is finished. Enjoy your family and the money you have made. He had a good career.[/QUOTE] Honestly I am going to say this and i hope it doesn't sound wrong but i think he wants to get away…