Robert Guerrero: I'm Looking To Be Back in a Big Fight in 2019

His nickname is “The Ghost,” and his last, “Guerrero,” translates from Spanish as “Warrior.”

Robert “The Ghost Warrior” Guerrero (36-6-1, 18 KOs) is back in boxing, having unretired to resume a standout 16-year career 16 months after announcing his exit from the game.

“I’m thankful and I’m looking forward to getting back in the ring.  The time off has been good for my mind and body as I’m fully rested these days,” said Guerrero, a 35-year-old all-action two-division world champion whose career is highlighted by a May 2013 multi-million dollar, 147-pound championship loss to Floyd Mayweather Jr.

“My training camp has been fabulous. Of course, the goal is to win another world title, but being in big fights, fighting the best, is also a goal.  I’m looking to be back in a big fight sometime in 2019.  First, I must win my fight on December 1, then I’ll start looking toward the future.” 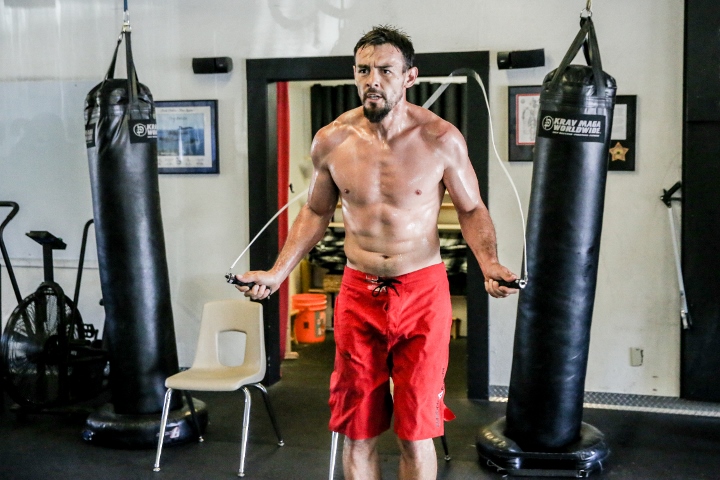 Nicknamed, “Bad Boy,” Mate’s 55-second KO of Laszlo Kokai in July represented his third straight knockout victory since being dropped twice during his own first-round stoppage loss to Sandor Martin in December 2017.

“I don’t know much about [Mate.] All I know is I’m coming to win this fight and to win it impressively,” said Guerrero, who, in 2010, put his career on hold to help support his wife, Casey, in her recovery from a bone marrow transplant and her battle with cancer.

“I’m not going to give away my game plan, but the fans will see me use my jab more, that’s all I can say right now. But my goal is to win this fight by all means necessary. Whether by knockout or by decision, just win, baby.”

Guerrero’s last fight in July was a third-round TKO loss to former 135-pound titleholder Omar Figueroa, which represented the only stoppage loss of his career. His resume is includes route-going losses to current and former welterweight champions Keith Thurman, Danny Garcia and Mayweather.

“Guerrero and his father and trainer, Ruben, orchestrated a 15-fight win streak producing world titles at 126 and 130 pounds, interim crowns at 135 and 147, and consecutive 147-pound unanimous decisions over champions Selcuk Aydin and Andre Berto before being dethroned by Mayweather.

In 2011, Guerrero had arthroscopic surgery to repair a torn tendon in his rotator cuff, an injury that kept him out of the ring for 15 months.

“There is no one particular reason why I’ll be fighting again. I just know I have some fight left in me,” said Guerrero, who is 2-5 in his past seven fights, having lost his past three in a row.

“I want to get back in the mix. Everyone in my family has concerns about me returning, but I’ve reassured them that I’m all good, my body is rested, and I’m ready to go.”

I guess his creepy Pastor told him that from the Mayweather fight. That was real funny to me. Leading up he was like it’s God’s will to beat Mayweather. After the fight he was confused about God’s will. LMAO-GTFOH with…

Guerrero looked bad against Figueroa. I remember watching it and Guerrero looked like a shell of his former self. Maybe the time off did help him. Who knows? We'll see how he looks on Saturday. You have fighters that come…

At this point, I wouldn't be surprised if he's TC next opponent

[QUOTE=MasterPlan;19306022]They fought already.[/QUOTE] Oh yea that’s right. It was porter who didn’t get his turn.