The former lightweight titlist lived up to his pre-fight promise.

Easter Jr. forced a fast pace and withstood the attack of Adrian Granados in taking a unanimous decision Saturday evening at Santander Arena in Reading, Pennsylvania.

Easter Jr. came out firing his right hand, repeatedly landing on Granados’ all too inviting guard. There was plenty of motivation behind his attack, as the 28-year old from Toledo, Ohio sought his first win since a decision over Javier Fortuna way back in Jan. 2018. The bout marked the final defense of his lightweight title reign, conceding the belt to Mikey Garcia in their unification bout last July. 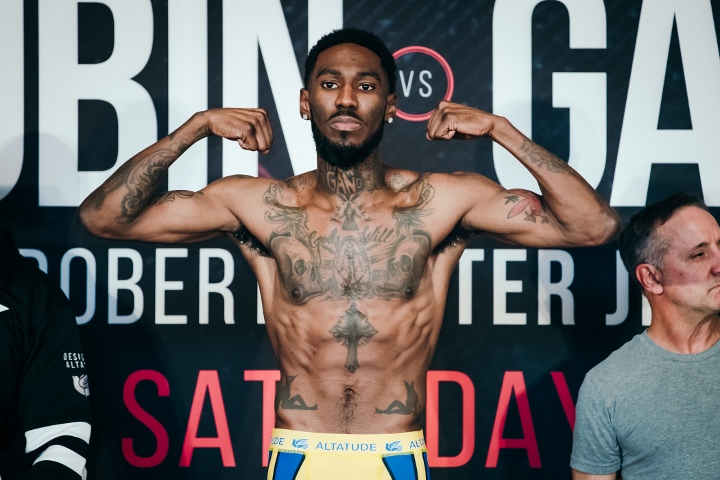 This past April saw his ugly 12-round draw with Rances Barthelemy, a fitting verdict as neither boxer deserved to win nor chooses to ever again recall. Easter Jr. did his part to create new memories on Saturday, which marked his debut as a junior welterweight. The high octane opening round benefitted Easter Jr., a traditionally high volume puncher who loves to mix it up on the inside.

His desire to fight much smaller than his 5’11” frame can also be his undoing at times. Granados took advantage of the opportunities presented, the Chicagoland ring veteran shaking off Easter’s attack and responding with counter right hands and compact left hooks.

The two traded big shots in a furiously paced round three, one where Easter Jr.—upon the urging of father and head trainer Robert Easter Sr.—remembering to put his height and reach advantages to good use. The former titlist connected with an uppercut from long range, and scoring with left hooks while offering lateral movement. Granado never stopped coming forward, taking two to give back at least one every time, right hand power shots serving as the weapon of choice.

Easter Jr. opened round four with a left hook that backed up Granados ever so slightly. It was enough to give him space to use every inch of the ring, forcing Granados into plodding mode as his efforts to cut off the ring instead made him a target for a mobile Easter Jr. who alternated left hooks and constant movement to keep his foe off rhythm.

Action threatened to slow down in the second half of the fight, but neither athlete had it in them to turn a fight into a boxing match. Granados targeted the body late in round six, though failing to slow down his foe. Easter Jr. connected with right hands and left hooks upstairs, intensifying the pace in a grueling round seven that only prompted Granados to pick up his attack. The two traded power punching flurries in the final 10 seconds of the round, one where Granados landed more punches than any other Easter Jr. opponent and still with nine minutes to go.

It wasn’t enough time for Grandos to rally back from an early scorecard deficit, but certainly enough to impose his will on Easter Jr., who was forced to contend with blood pouring from a cut inside his ear. Easter’s corner begged the former champ to box more in the 10th and final round, though the instructions didn’t at all take. Easter opened the frame with a chin check, with the action flowing from there and neither boxer giving an inch until the final bell at which point they embraced in celebration of one hell of a fight.

Still, it was a massive improvement from his knockout loss to Danny Garcia earlier this year, and in fact reminiscent of his performance against Easter Jr’s stablemate, former four-division titlist Adrien Broner nearly three years ago.

“Styles make fights,” noted Easter Jr. (22-1-1, 14KOs) after picking up his first win in nearly two years. “(Barthelemy) was a counter puncher. Granados was coming forward.  We knew he was coming to fight.”

[QUOTE=MASTER OF you;20148142][QUOTE=Realizniguhnit;20147823]People forget Mikey is 31 going on 32. He's not looking to get that spark back against these young guys he's looking for the big money fights at this point in his career. Mexican's generally don't have longevity…

easter was a fraud at 135 he lost to comey and tiny fortuna was giving him that work. he gets body bagged at 140.

[QUOTE=greeneye99;20147314]How can you say a boxer is done? And you didn't even watch the fight? #casual fan alert[/QUOTE] Anytime someone post dumb shyt like that check out their join date. I swear the 2018/2019 alumini are the worst

Two soft touchers. Prograis destroys both of them.

[QUOTE=Dean_Razorback;20147284]those cards seems to wide to me. it was way closer than that. maybe even a draw. granados threw more and landed more[/QUOTE] Thats not how score cards work. If im scoring a fight and every round is super close…