Adan Gonzalez pulls off the huge upset. He dropped two-time Olympic gold medal winner Robeisy Ramirez in round one and was the busier fighter, throwing 100 more punches.

Ramirez, who was making his pro debut, averaged just 40 punches thrown per round. 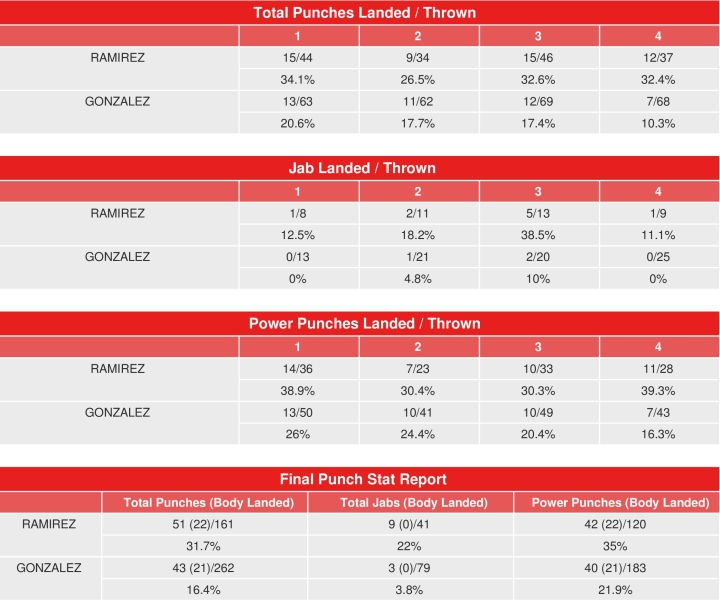 Two-time Olympic gold medalist Robeisy Ramirez was knocked down seconds into the first round and lost his professional debut to Adan Gonzales on Saturday night.

Ramirez suffered a stunning split decision defeat at Temple’s Liacouras Center, a crushing start for one of boxing’s prized prospects. Gonzales won 40-35 and 39-36 on two scorecards and one judge scored the bout 38-37 for Ramirez.

The 25-year-old Ramirez won gold in two weight classes fighting for Cuba in the 2012 London Olympics and 2016 Rio Games. He defected from Cuba last year and signed a promotional deal with Top Rank.

Gonzales (5-2-2, 2 KOs) knocked down Ramirez with a left hook within 20 seconds of the first round and Ramirez never rallied to mount serious offense in the four-round bout.

Ramirez backed up his flyweight gold medal from the 2012 London Olympics by moving up in weight and winning perhaps the most talented division in the Rio Games.

The victory in the bantamweight tournament capped a cycle of redemption for Ramirez, who was kicked off the Cuban national team in 2014 for repeatedly neglecting his training. He then failed to receive a first-round bye in Rio, forcing him to take a long road through a talented bracket and he defeated New Jersey’s Shakur Stevenson to win gold.

Beating young or faded champions are big deal in this 21st century to preserve the unbeaten "0" record.

Massive disappointment. It’s been pointed out that some great, even legendary, fighters lost in their debut. But this can never be a good sign. It’s not like it happens all the time with much-heralded prospects. And from what I’ve been…

Honestly, as far as Cuban stands out..he always seemed a bit crude in his style. Compare how he punches and how sharp his punches look compared to someone like Rigo, Gamboa, and even Lara. He's much easier to hit, is…

This was a bigger bust than AJ's US debut. What a disappointment. Shakur is probably kicking himself for losing to this guy.

Man this is beyond embarassing, Ramirez just took a giant dump on every Cuban worldwide, i was real hyped about this guys potential in the pros too... honestly the only way for redemption would be an immediate rematch with Gonzalez…