This was the result Robeisy Ramirez expected nearly one year ago—but one he will gladly take on the second try.

The talented Cuban southpaw—now based out of Miami—looked far sharper in the opening round of the rematch, working behind his jab and scoring with straight left hands. Gonzales—who hasn’t fought since his longshot win last year in Philadelphia—struggled to time his opponent, unable to unearth his offense as Ramirez bounced on his toes and never provided a stationary target. 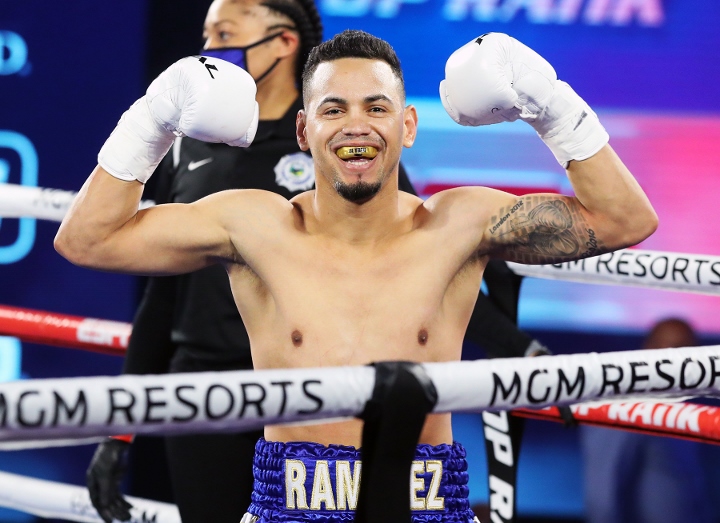 Ramirez continued to dictate the pace in round two. Gonzales was getting closer with his punches, but still a beat or two behind. Things grewpersonal—even more so than was the case at Wednesday’s feisty weigh-in—when Ramirez shoulder bumped Gonzales to the canvas midway through the frame. More extracurricular activities came at the end of the frame as Ramirez launched a left hand shortly after the bell.

Referee Robert Hoyle warned both boxers to keep it clean in round three, a frame which saw Gonzales pick up the pace. Ramirez fought behind a tight guard, picking off most of the incoming and responding with range-finding jabs. Ramirez connected with two left hands midway through the round, bookending a right hand shot by Gonzales. Ramirez intensified his attack towards the end of the frame, scoring in combination.

Gonzales looked to take the lead in round four, but the type pressure that came in the first fight was sorely lacking 11 months later. The 23-year old averaged more than 65 punches per round when they met last August, outworking Ramirez by a wide margin. The rematch showed just how quickly Ramirez has since adapted to the pro ranks, relying on his infighting skills to slip punches at close quarters and peppering Gonzales with left hands at long range.

Action slowed in the sixth and final round. Gonzales (5-3-2, 2KOs) limited his offense to searching for one punch at a time, while Ramirez was content to potshot from the outside. The pace sat well with the 26-year old, who had scored three straight knockouts heading into the evening and was able to go a career-long six rounds for the first time in his career.

“I was happy with my performance but the one thing that was missing was that one big shot,” Ramirez admitted after the bout. “I listened to my trainer to a tee. The one thing missing was being able to land that one punch that could have ended the fight.”

Instead, he will settle for putting more distance between his lone career loss and present day.

[QUOTE=garfios;20647315]the thing about Ugas is that he keeps himself in shape. Go to his page in FB, you will see he doesn't balloon like other fighters. Duran used to gain 35-50lbs between fights. He has became a solid professional fighter.[/QUOTE]…

[QUOTE=CubanGuyNYC;20646666]Yeah, he went beyond my expectations. You’re right, he looks much better at 147. And even then, he looks ripped. Ugas could easily fight at 154.[/QUOTE]the thing about Ugas is that he keeps himself in shape. Go to his page…

[QUOTE=garfios;20646604]I remember we talked about Ugas. I always thought he could hang with the best of them. The weight he was fighting I didn't agree with. He looked drained.[/QUOTE] Yeah, he went beyond my expectations. You’re right, he looks much…

[QUOTE=CubanGuyNYC;20644022]Yeah, I’ve been guilty of overlooking and overhyping fighters on more than one occasion. Arguello is a good example. Sometimes great fighters take some time to get going. Not that he’s a great, but I was wrong about Ugas early…

[QUOTE=Curtis2;20643759]Adan's been cutting grass, laying mulch, trimming trees all year and with having only 2 weeks to train caused a lot of anxiety. Talking too much was Adan's symptom for his competitive anxiety he was feeling knowing darn well, with…