New York - Although he's still at the young age of 24, and with one loss on his record, Christopher “Pitufo” Diaz (24-1, 16 KO’S) could be fighting for his chance to prove that he belongs.

The Puerto Rican super featherweight was thought to be on the path of a world title. But his road took big bump when he was soundly defeated by Masayuki Ito.

That's when he decided to change his routine and linked up with one of the best trainers in the sport, Hall of Fame coach Freddie Roach. 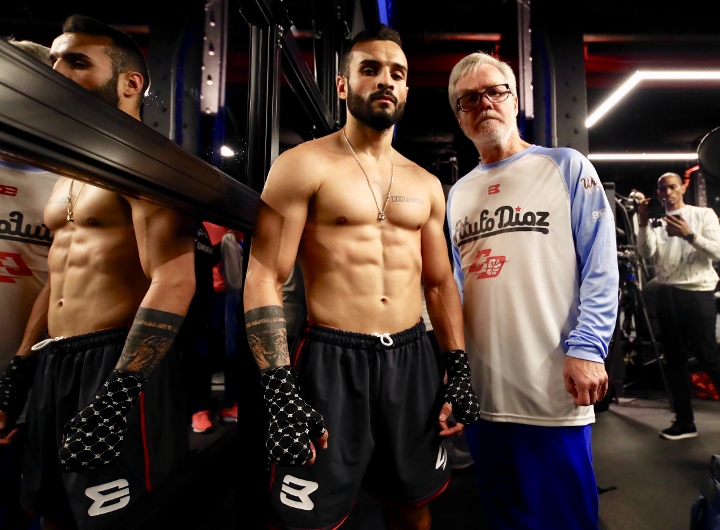 This Saturday he takes on highly touted prospect Shakur Stevenson (10-0, 6 KO’s) from Newark, New Jersey - as part of the undercard to the Crawford-Khan ESPN pay-per-view inside Madison Square Garden.

Most people are favoring the prospect over Diaz even though he’s only lost once and has far more experience.

Roach feels Diaz should be the favorite in this fight.

“It’s a great fight,” Roach told BoxingScene.com. “I talked to my fighter. This guy has 10 pro fights. If we can’t beat him then we don’t belong here. [Diaz is] 100 percent behind me on that. We had a great camp. He’s at weight already. I think it will be a big upset. But I don’t think it is an upset, I think we should win.”

However if he can’t beat the highly touted prospect, Roach feels that Diaz would need to reassess his career even though it would only be his second career defeat.

“Listen he’s got one loss,” Roach explained. “But that was before me. But this is the big stage. It it possible this is his last fight at the big stage?  Possibly. He has that one loss. There’s no shame in having that kind of record but on this big stage.. we’re fighting a guy with 10 fights. If we can’ beat this guy we don’t belong here. This possibly could be his last fight if he loses.”

“I think Shakur’s ok. He needs a lot of room for his punches. So my strategy for him was pretty easy," Roach.

[QUOTE=PrBoxing88;19669436]Pitufo will beat this guy and is gonna be brutal. Bet on that.[/QUOTE] Be a fool and bet your house on a guy who’s proven nothing but being a loser as a world Title challenger to the weakest champ in…

[QUOTE=Mister Wolf;19668872]Shakur gonna look like Ray Robinson out there knocking Diaz out.[/QUOTE] Sloooow down on the SRR thing.This is a big step up from what he has been fighting so far.I gotta admit I was surprised when I heard this…

[QUOTE=BufordTannen;19670170]I picked manny to beat broner and Lucas. I must be Filipino now[/QUOTE] At least your country can fight, according to that AK mofo we Ricans can't fight.

[QUOTE=Boksfan;19669980]Bytch you are not American, you are Cuban you lying bytch. I remember you picking Lara to beat Hurd and Ortiz to beat Wilder in the name of Castro you little lying bytch :dance:[/QUOTE] I picked manny to beat broner…

Stevenson did not Winner Silver at the Olympics and more than Held his own with one of the greatest Amatures I've ever seen in Robisey Ramirez for no reason. While yes Diaz is a strong step up, Stevenson can fight…