Roach: Pacquiao is The Boss, Gave Mayweather a Good Scare

Hall of Fame trainer Freddie Roach, who works with WBA welterweight champion Manny Pacquiao, is still crossing his fingers that Floyd Mayweather will come out of retirement for a high stakes rematch between the two.

Mayweather retired from boxing after stopping Conor McGregor in the tenth round in their August 2018 encounter.

"If I think it's possible, Manny does want that fight," Roach said to ESPN Deportes. "I was certainly disappointed in the first fight because Manny told me in the fourth round: 'My shoulder hurts, I can't use it anymore' and I told him to 'use it in the best way you can.' I know Manny can fight much better." 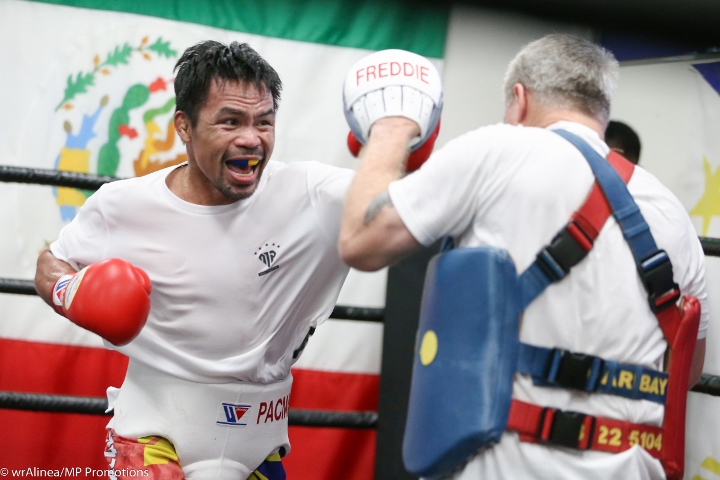 Mayweather defeated Pacquiao by unanimous decision in a meeting held in May 2015 in Las Vegas, where the Filipino claimed that he suffered an injury to his shoulder during training that intensified in the course of the fight.

Since then, Pacquiao has been asking for a rematch, and last week there were heated words being exchanged with Mayweather on social media.

Mayweather was ringside earlier this month, when Pacquiao won a twelve round unanimous decision over Keith Thurman at the MGM Grand in Las Vegas.

"Manny really wants the fight, that's why social media interaction," Roach explained. "He says that Manny works for him now and Manny said he hasn't seen his name on any check. I loved that about Manny. I thought it would happen, I thought he would get called out [by Mayweather], but he [Floyd] slipped away."

According to Roach, Mayweather might have been scared off by Pacquiao's performance.

"It would scare me too. I think Manny gave him good reasons to scare him, that was a great Manny fight... much better than when they first fought," Roach said. "[Mayweather] saw the improvement and that's why he went through the back door. Manny is the boss," Roach said.

"Manny fought very well. It's the best he has looked in a long time, beating an undefeated boxer, it was a great moment in his career. Manny was upset going into the fight. When Manny goes to a fight where he dislikes his opponent just a little, it's always much better and this guy crossed the line and did me a favor."

The reason why so many are mad Floyd won is because Floyd made it look so easy They kept expecting manny to change the tide and in the fourth round it seemed as though manny would......and then the fight was…

The reason why so many are mad Floyd won is because Floyd made it look so easy They kept expecting manny to change the tide and in the fourth round it seemed as though manny would......and then the fight was…

[QUOTE=Spoon23;19951615]Those who are rational boxing fans would noticed that. It’s the Floyd fan girls who wouldn’t accept it since that would be embarrassing for them to realise the IV ridden Floyd fought like a Pussay over an injured Pacquiao running…

[QUOTE=radiotracer;19949708]Floyd calls his people The Money Team but he’s leaving $300 million on the table. There’s got to be a reason why he doesn’t want that fight.[/QUOTE] He's old and comfortable, there are so many reasons apart from fear, if…