Roach on Pacquiao's Options: 2 More Fights, Then Run For President

Although the ongoing coronavirus pandemic has put Manny Pacquiao’s next move on hold given the uncertainty of being able to schedule major fights without an ability to sell tickets, trainer Freddie Roach said Pacquiao has been contemplating the end of his career.

“I’ve had discussions with Manny on having two more fights for his career and then maybe (stay) in the politician side of it,” Roach told BoxingScene..com.

Then Roach added with laugh, “I said, I want to run your campaign.’”

The 41-year-old Pacquiao also serves as a senator in his native Philippines and for the past few years has scheduled his fights around his time off from the legislature with the prospect of possibly running for president once his boxing career is over.

“Manny would like to fight a couple of more times and then run for the presidency of his country,” Roach said. “The first fighter to ever do that and it will be another part of his history and I think he will be really good at.”

While that move might be in the future, Pacquiao (62-7-2, 39 KOs) remains an outstanding fighter, scoring one of the more impressive victories of his 25-year pro career in his last fight in July 2019. That is when Pacquiao, who has won world titles in a record eight weight classes, took on the much younger and then-undefeated Keith Thurman. Pacquiao knocked him down in the first round and went on to win a decision and take his welterweight world title, making Pacquiao the oldest fighter in history to win a 147-pound title. 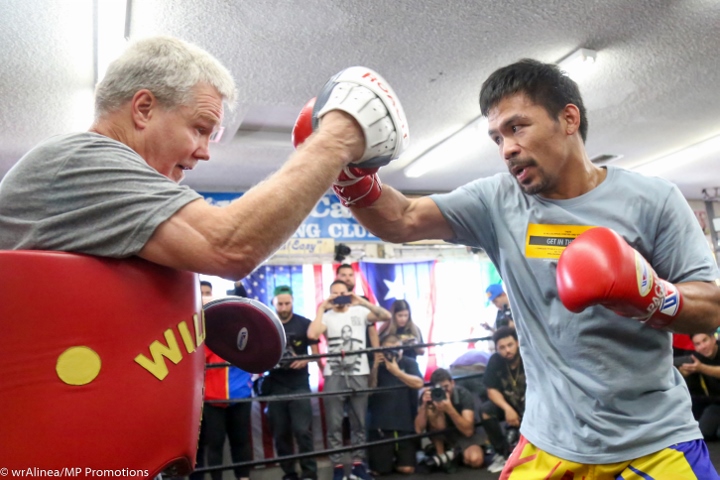 Roach said that Pacquiao hopes to fight again before the end of the year or in early 2021 with the caveat being that the coronavirus situation will likely dictate the schedule.

Still, Roach said that has not stopped Pacquiao and the Hall of Fame trainer from talking about a wish list of potential foes.

After four-division world titleholder Garcia (40-1, 30 KOs), who is now fighting in the talent-rich welterweight division, defeated former world titlist Jessie Vargas by unanimous decision on Feb. 29, he continued to talk about his desire for a fight with Pacquiao, who has also said Garcia interests him.

But there are also other names Roach said that Pacquiao has in mind down the stretch of his career.

“What he would like best is (Floyd) Mayweather one more time,” Roach said.

In 2015, after years in the making, Pacquiao famously dropped a unanimous decision to Mayweather (50-0, 27 KOs) in their welterweight title unification blockbuster that shattered all revenue records in boxing history. After the fight, Pacquiao said he was hampered by a shoulder injury he had suffered during training camp and eventually had surgery to repair a torn rotator cuff.

“(After) the fourth round of that fight he told me my shoulder is shot. I said, ‘OK, Manny, go out there, do the best you can, don’t get hurt,’ and he says, ‘Of course,’” Roach said. “And so he would like to get that one back one more time. He would. Watching the fight with no commentary it was a pretty close fight. He fought well but he can fight much better and with much more activity. I think the activity would be too much for Mayweather. Then again, Mayweather might not come back.”

Another fight Pacquiao has some interest in, according to Roach, would be a title unification bout against Terence Crawford (36-0, 27 KOs), one of boxing’s best pound-for-pound fighters. When Pacquiao and Crawford were Top Rank stablemates it’s a fight Top Rank chairman Bob Arum was interested in making but Pacquiao did not show interest. Now, even though Pacquiao is no longer with Top Rank, Roach said it’s a fight that does interest the Pacman.

“Arum’s fighter is making a lot of noise, Terence Crawford. I think Terence Crawford is a very good fighter and maybe one of the toughest fights in the world for Manny but it wouldn’t be somebody I would turn down,” Roach said. “The thing about Manny is he doesn’t just want to fight. He doesn’t just want to fight opponents and so forth. He wants to fight the best guys out there.”

Roach has even mentioned the prospect of Pacquiao moving up in weight to take on middleweight world titlist Gennadiy Golovkin (40-1-1, 35 KOs), one of boxing’s biggest names. Pacquiao, however, told the Manila Times recently that he did not want to fight above the welterweight limit of 147 pounds, which is an unrealistic weight for GGG to drop down to.

“Personally, I think it’s too much weight (for Pacquiao to fight at middleweight), but I wouldn’t say definitely no that Manny would do that,” Roach said. “I don’t think 160 is really viable but you never know with Manny Pacquiao. But the thing is we all know it’s his decision and he’ll make the right one.

“We talk about names but the thing is Manny has to make the decision on who he’s going to fight and we’re all going to be happy with who he picks."

[QUOTE=Truth Serum;20707366]Manny didn't struggle once vs Horn in terms of boxing. Manny doubled Horn's punches landed. You must have focused on all that elbows to the face and headbutting and used it as if Horn deserved extra points for it.…

[QUOTE=Jab jab boom;20706934]doesn't matter if pac should've won that fight vs horn, he wasn't dominant and was struggling badly. He looked tired, beat up and worn down. Meanwhile Crawford treated horn like the C class fighter he is and didn't…

[QUOTE=Truth Serum;20706688]Midget Manny outlanded Horn 11 out of 12 rounds, had Horn defenseless out on his feet in the 9th, and gave Horn's face the worst beating of his career sending him away in ambulance.... something Crawford couldn't do!... but…

[QUOTE=Jab jab boom;20703537]he dominated horn, something pac couldn't do, and he made khan quit like a little b***h.[/QUOTE] Midget Manny outlanded Horn 11 out of 12 rounds, had Horn defenseless out on his feet in the 9th, and gave Horn's…

[QUOTE=Lefty0616;20704528]Pacquiao really doesn't need to fight again. The fighter that most fans want, won't give him a rematch. Mayweather will forever go down as a coward.[/QUOTE] [QUOTE=SKARY LARRY;20704920]Pacquiao can end his carrier on a high note beating Thurman. He has…