Under the watchful eyes of world-famous Freddie Roach and Vice Mayor Buboy Fernandez, Senator Manny “Pacman” Pacquiao (61-7-2, 39 KOs), the Philippines' national treasure, boxer laureate and the sweet science’s only eight-division world champion, kicked off his U.S. training camp with eight rounds of sparring.  Not bad for the jet lagged fighter who arrived at LAX after a 19-hour flight on Saturday night to a throng of media and fans.

After five weeks of training in the Philippines, Manny is back at Roach’s Wild Card Boxing Club in Hollywood, Calif., preparing for his third world championship fight in the past 12 months.  Amazin’ Manny has begun the most intense part of his training and conditioning for his battle against undefeated WBA welterweight super champion Keith “One Time” Thurman (29-0, 22 KOs), from Clearwater, Florida. 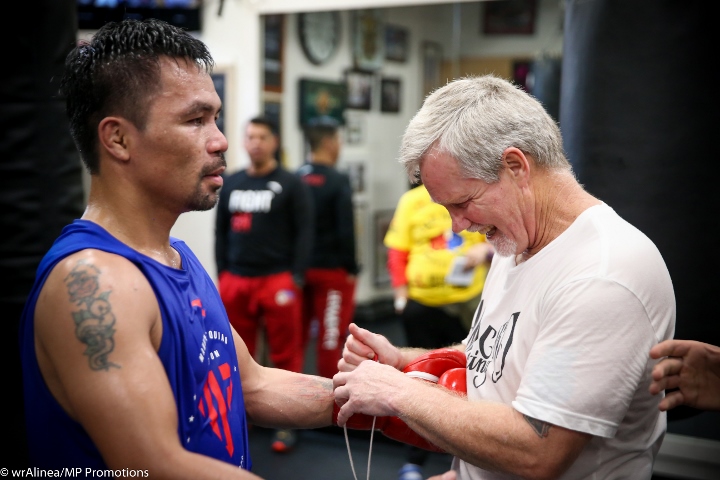 And for the first time in many years, Manny, 40, and ten years Thurman's senior, has been installed as an underdog by major sports & race books around the world.

“I haven’t made a bet in a long time, but the oddsmakers have brought me back.  I’m going to make a huge score betting on Manny in this fight,” said Roach.  “Manny loves beating undefeated fighters, especially the younger ones.  Heck, at this stage of the game, everyone Manny faces is younger.  But that makes it fun for Manny.  And when Manny is having fun, his opponents had better watch out.  I was very pleased with Manny’s first day at Wild Card.  Buboy and Justin [Fortune] have him in great condition for the rigors of this part of training camp.  We were scheduled for six rounds of sparring and Manny insisted on going eight with two sparing partners.  He’s running the Hollywood Hills like a deer.  Nobody has the work ethic and conditioning like Manny.  I can already see we are going to have to hold him back throughout camp.

“This is a great matchup.  Thurman has youth and size.  I’m sure he will come into the ring with 160 pounds behind his big right hand.  Manny will be under 150,” Roach continued.

“But we will have speed and movement.  Winning this fight will come down to taking chances.  Manny proved in his last two fights, against Matthysse and Broner, that he has his killer instinct back.  Thurman better be prepared to shoot the works.”

I love manny but he aint winning this, no way thurman is the same since last fight

I can't call this fight

[QUOTE=Bronx23;19842419]For what its worth I have a cousin who lives literally 5min from the wildcard he works out there. People talk & he always tells me when he hears or sees something going on at the gym. Sometimes it's just…

I'm happy Pac being in training camp instead of PH senate.:cool2:

Roach still sucking up to Manny, his big bet is probably $5.