Roach: Crawford is a More Complete Fighter Than Lomachenko

THE world’s leading trainer believes Amir Khan can succeed in upsetting Terence Crawford — even though he considers the American the finest fighter in the world.

Khan challenges the great WBO welterweight champion at New York’s Madison Square Garden on Saturday in what could prove to be his defining fight.

Trainer Freddie Roach is as familiar with Khan, having once trained him at his famous Wild Card gym, as he is with the level Crawford is competing at after inspiring the great Manny Pacquiao to his peak years. 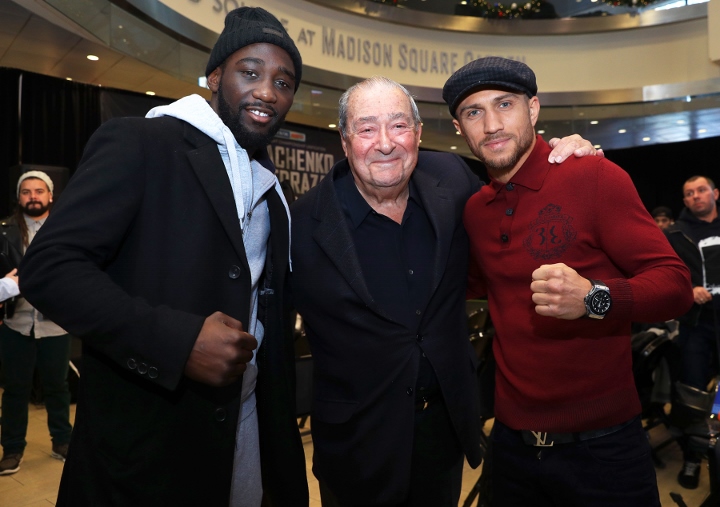 Fights with Pacquiao and Floyd Mayweather previously eluded Khan when he hoped to challenge one of the world’s two leading fighters, but this weekend the opportunity the 32-year-old from Bolton has desperately wanted finally arrives.

“Khan can pull off the upset if he fights the right fight,” Roach told Press Association Sport.

“I always said, if Khan goes out there and boxes and wins one round at a time, and keeps doing it, and not look for the knock-out [he can win].

“When he hurts him, don’t open up on him because that’s when he gets caught, and puts himself in harm’s way.

“He’s a very good boxer; he still has a lot left in him. His speed; his foot-speed and hand-speed are unbelievable. I remember him and Pacquiao sparring competitively, it was about even. He’s definitely at that high level; hopefully Father Time hasn’t got to him yet.

“I still think he’s young enough and fresh enough to have moments of success, but I like Crawford to win the fight.

“He’s a big underdog; Crawford’s the best fighter in the world. Pretty soon him and [fellow welterweight] Errol Spence are going to have to fight each other.”

The decorated Roach is reminded of Mayweather-Pacquiao by the rivalry between Vasyl Lomachenko and Crawford, and also believes that Khan’s task has been made even more difficult because Crawford will want to respond to Lomachenko’s destruction of Anthony Crolla last weekend.

“He does have to produce a good performance,” he said. “I’ve seen him go out and box before, he’s a very good boxer, but I’ve seen him blow guys away also.

“He can start very quickly and knock out guys in only two rounds. He can punch, too, he’s not just a good boxer but a good puncher also. He’s more of a complete fighter than Lomachenko, and for what happened last week he’s going to have to jump on Amir right away.

“You have to control your fighter and get him ready for what he’s getting ready for, and make sure he stays on that [instead of being concerned with a rivalry]. It pretty much affects everyone in camp.”

[QUOTE=Madison boxing;19674084]Crawfords not fought a world class fighter yet. He may end up looking as limited as mikey did when he steps it up. If he ever steps it up that is.[/QUOTE] :rofl: : rofl:

[QUOTE=pillowfists98;19674665]lol cmon man you know damn well that Crawford would win easy. Would be a pointless fight.[/QUOTE] Just like Leonard beat Duran easy. I guess that fight was pointless as well.

Yes because Filiberto Nieto who Terence fought, who was 1-4 at the time was as good as Solido right?derp. Not even hating on Crawford or Loma. But cmon... dudes are in separate weight classes. P4p is purely speculation

[QUOTE=Madison boxing;19674084]Crawfords not fought a world class fighter yet. He may end up looking as limited as mikey did when he steps it up. If he ever steps it up that is.[/QUOTE] Verdejo, Gamboa, Postol not world class? O_o

[QUOTE=MrShakeAndBake;19675725]Lopez is a prospect who fought no body like this guy tonight, [SIZE="5"]why would P4P Champ fight him if he can go to UK and get paid fighting a better boxer for a chance to get WBC belt , are…