Ritson-Vazquez: Judge O'Connor To Appear Before British Boxing Board

Terry O’Connor has been summoned to appear before the stewards of the British Boxing Board to explain himself after a picture was widely circulated that appeared to show him looking at a phone while working as a judge during Saturday’s Lewis Ritson-Miguel Vazquez fight in Peterborough.

The still taken from television showed him looking down at something in his hand, which looked like a phone, but some have said it was a pen and his scorecard.

But following an outcry on social media, with even promoter Eddie Hearn demanding he be fired if found to be using a phone, O’Connor is to be asked to explain himself. 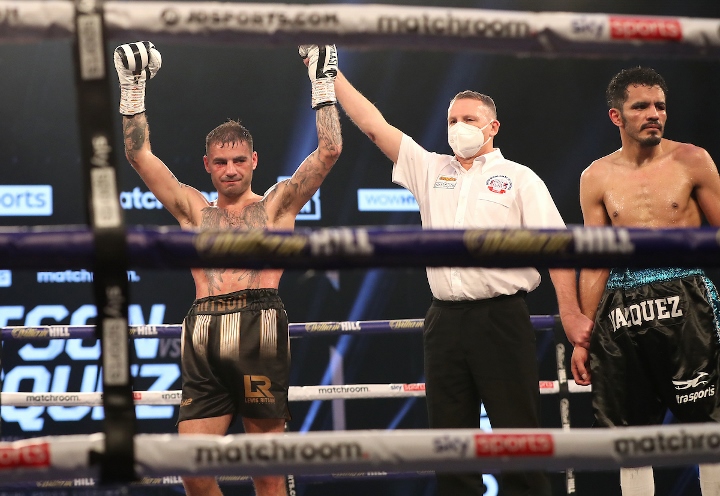 He might also be asked to explain two controversial scorecards from the show. He scored Ritson a 117-111 winner in a fight when most watching on television seemed to make Vazquez a comfortable winner, while he also made Thomas Patrick Ward an 88-84 winner over Thomas Essomba when their fight went to a technical decision after he had struggled throughout.

O’Connor, 67, a former heavyweight boxer, who has handled numerous world title fights as a referee and a judge, has been seen as a controversial figure. Among his more high profile controversies were an early stoppage in Joe Calzaghe’s win over Peter Manfredo, a landslide points win as scoring referee handed to Tyson Fury in his first fight with John McDermott, a fight he had seemed to lose and a allowing Danny Williams a free shot at Michael Sprott when Sprott had protested about an obvious low blow moments before.

[QUOTE=Corelone;20826087]It's bad when can you ruin an ugly fight with bad scoring. They're going to do an O'Conner on him, will be added to the list cautions for imports.[/QUOTE] Sums it up perfect! An ugly fight ruined from bad scoring..…

It's bad when can you ruin an ugly fight with bad scoring. They're going to do an O'Conner on him, will be added to the list cautions for imports.

i love how hearn thinks he will get praised for calling out his own corrupt judges :lol1: and lets not pretend like this is one bad apple, practically every single judge/reff that matchroom uses is on the take. the corruption…

At the very least, I would hope that it would result in ways to ensure that the judges don't have communication devices on them while the event is going on. (I realize they'll just move onto other smaller tech) Can't…

[QUOTE=GlassJoey;20825252]Terry O’Connor has been involved in he majority of blatant robberies I have seen in UK boxing. This one wasn’t even near his worst. He gets away with most because the other 2 judges either watch the fight or are…