Boxing’s longest reigning active lineal champion is now one win away from fighting for an alphabet title.

The June 23 clash between Guillermo Rigondeuax and Juilo Ceja–which airs live on Fox from Mandalay Bay in Las Vegas, Nev. (Sunday, 8:00pm ET) will now come with the caveat being guaranteed a shot at the World Boxing Council (WBC) super bantamweight title.

Even better for whomever prevails is that he won’t want long to find out his next opponent, which will be produced just three weeks later. 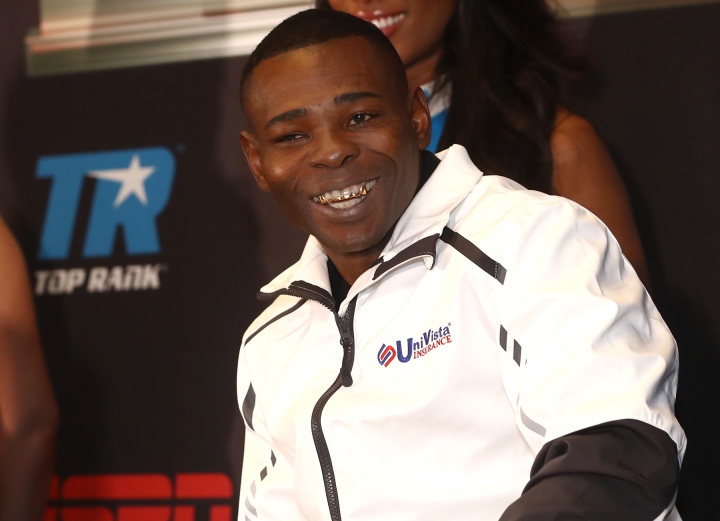 “Ceja is ranked number one in the 122-pound division and Rigondeaux will enter the fight third in the (WBC) rankings,” Mauricio Sulaiman, president of the WBC explained in his decision to sanction Sunday’s bout as a final eliminator. “The winner will face the winner of Rey Vargas vs. Tomoki Kameda.”

Vargas owns the full version of the 122-pound title, which the unbeaten boxer from Mexico will defend in a July 13 title consolidation clash versus Kameda, who claimed an interim version of the title last November.

Rigondeaux (18-1, 12KOs) remains a champion even without a belt around his waist or the promise of a title shot in the future.  The 38-year old southpaw—a two-time Olympic Gold medalist from Cuba—claimed the lineal 122-pound championship in a 12-round decision win over Nonito Donaire in April 2013.

The ugly side of the sport’s politics have since seen his career progress slowed to a crawl. For years, he was shunned by his own promoter Bob Arum and in 2015 frozen out by Al Haymon’s Premier Boxing Champions (PBC), who at the time housed two major 122-pound titlists in Leo Santa Cruz and Carl Frampton, as well as Rigondeaux’s WBA “Super” title mandatory challenger and “Regular” titlist Scott Quigg.

The tactics resulted in his being stripped of his WBO title and reduced to “Champion in Recess” by WBA. The latter belt was returned, which he would defend twice more before he was forced to vacate at the end of 2017 following a one-sided stoppage loss in a failed bid versus then-130 pound titlist Vasiliy Lomachenko.

Through it all, he’s managed six defenses of his lineal championship, though none since a knockout-turned No Contest versus Moises Flores in June 2017. Following his loss to Lomachenko, Rigondeaux sat out for more than a year before resurfacing under the PBC banner, making his debut in January, scoring a 1st round knockout of Giovanni Delgado.

On paper, he figures to get a much stiffer test out of Ceja (32-3, 28KOs), a former 122-pound interim titlist from Mexico. He claimed such honors in a thrilling 5th round knockout of Hugo Ruiz in Aug. 2015, only to suffer a fluke 1st round injury stoppage versus his countryman in Feb. 2016.

Two wins followed, including a knockout win over former bantamweight champ Anselmo Moreno in May 2017. Interestingly, he enters this fight on the heels of yet another bizarre injury stoppage loss, dominating Franklin Manzanilla over four rounds before having to retire in his corner due having suffered a badly broken nose in their May 2018 clash.

Manzanilla parlayed that freakish win into a title shot, dropping a 12-round decision to Vargas this past February. With Kameda now next in line for the unbeaten Mexican, Ceja and Rigondeaux surfaced to the top of the rankings, putting the winner of their upcoming bout next in line for the WBC title.

For Rigondeaux, a win on Sunday will give him the seventh successful defense of his true lineal championship, extending boxing’s longest active reign in the process.

20 fights in 10 years, that's just sad, hope he gets that bank and can stay active he is one of the most talented fighters of our generation.

[QUOTE=ShaneMosleySr;19844271]The only reason he doesn’t have a title at 122 is the WBA stripped him for losing to Lomachenko at 130. They announced they would strip him if he lost but not if he won after the fight had been…

[QUOTE=tokon;19843884]Just stop with this "lineal titlist" rubbish. Rigo doesn't have a title.[/QUOTE] The only reason he doesn’t have a title at 122 is the WBA stripped him for losing to Lomachenko at 130. They announced they would strip him if…

[QUOTE=WallabeeKing;19843556]Ceja just got stopped in his last fight but this bout is a final eliminator, lmao. WBC love that PBC payola.[/QUOTE] Fight was stopped because he suffered a busted nose that wouldn't stop bleeding. Doctor wouldn't let him continue. He…

If Rigo goes on to win the WBC title he will be a future opponant for Pantera Nery since they are both with pbc now. Cant't wait!